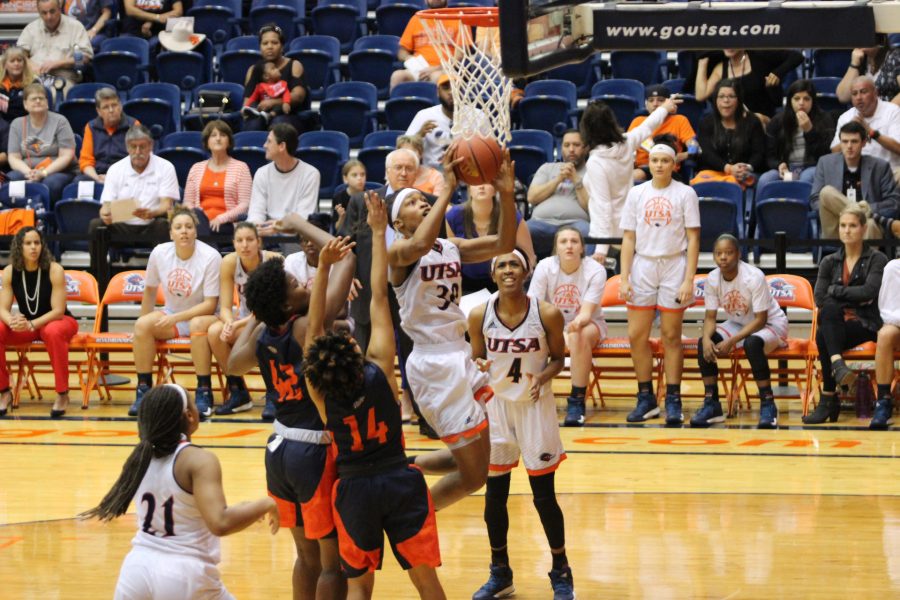 After the Runner’s huge victory against UTEP on Sat., UTSA center Tesha Smith acknowledged that she did not intend on having the best statistical game of her college basketball career.

“It just so happened today I was on fire,” said Smith of her 38-point performance against the UTEP Miners. “I just played as hard as I could.”

UTSA not only defeated UTEP 97-76 in a 21-point lopsided victory in front of 309 fans on Jan. 21 in the Convocation Center, but they also improved their Conference USA record to 5-1, moving them into second place.

Smith, UTSA’s senior center, scored her 38-points by dominating the paint on shooting 13-18 from the field and 12-13 from the free-throw line, both of which are personal bests for her. She also contributed by recording 9 rebounds and blocking two shots in 27 minutes of play.

“That’s a nice day’s work,” said UTSA Head Coach Lubomyr Lichonczak. “Tesha is our inside scorer, so we look for her. We surround her with great outside shooting so teams can’t key in on her.”

With 6:02 remaining in the second quarter, UTSA called a time out to make some key defensive adjustments after UTEP came within 10 points of UTSA’s lead. That allowed UTSA’s guards to force five UTEP turnovers and go on a 24-16 scoring run, led by junior point guard Loryn Goodwin whose 15 first half points gave UTSA a 52-35 lead heading into the second half of the game.

“Our team’s defense keyed our running, our steals, and we got some fast break opportunities,” said Coach Luby of his team’s first half defensive adjustments. “Loryn in the full court is tremendous.

She handles the ball well. She’s got great court vision. She found people, and she scored herself.” Goodwin and Smith exited the game early in the fourth quarter after combining for 58 of UTSA’s 97 points. Goodwin scored 20 of her points on shooting 7-9 from the field while adding five assists to her stat line.

She did admit to not shooting from the three-point arch as well as she had expected after the game, but vowed to work harder during the week before the game against Marshall.

“I really wanted to get to the rim and finish, and I did that,” said Goodwin when describing her performance against UTEP’s back court.

“But I wanted to execute on my three’s, and I wasn’t doing that. I think I shot 1-4 or something. I got to work on that. I’ll be back, ready to go by next game.”

In their last meeting with the Miners, UTSA escaped El Paso with a two-point victory on Jan. 1 in a thrilling 83-81 victory. UTEP’s point guard Sparkle Taylor scored 28-points, leaving UTSA’s backcourt bewildered and with no answer on how to stop her.

In Saturday’s game, however, Goodwin took on the responsibility of keeping Taylor from reaching the 20-point mark as a personal goal. Goodwin held Sparkle to only one three-point shot made and kept her offensive production to only 16-points in 29 minutes of action.

“Last game, Sparkle Taylor had 28-points. This game she had 16,” said Goodwin of her matchup with UTEP’s most productive player. “I guarded her this time. I took the responsibility, and my teammates helped me out a ton, by talking to me and calling screens, and when their best player is shut down, other players had to take shots they weren’t comfortable taking.”

The Roadrunners returned home after winning games against Florida Atlantic by 10 points on Jan. 12  and beating Florida International by 11 two nights later.

In a competitive Conference USA league that has three teams tied for first place with a 6-1 record, the Roadrunners will need to continue executing on the defensive side of the court and maintaining a well balanced offensive attack with the duo of Goodwin and Smith.

“The only thing I feel we need to take from this last game into the game against Marshall is the same mindset,” said Smith looking forward to Thursday’s game against the Buffaloes. “We need to be able to dominate in-and-out. If someone’s hot on the inside, give it to them. If someone is hot on the outside, give it to them on the outside. We have to keep working the ball.”

UTSA looks to extend their winning streak to six games and improve their conference record to 6-1 on Thursday, Jan. 26 when they face Marshall University. Tip-off is scheduled for 7:00 p.m. in the Convocation Center.