The importance of representation in education 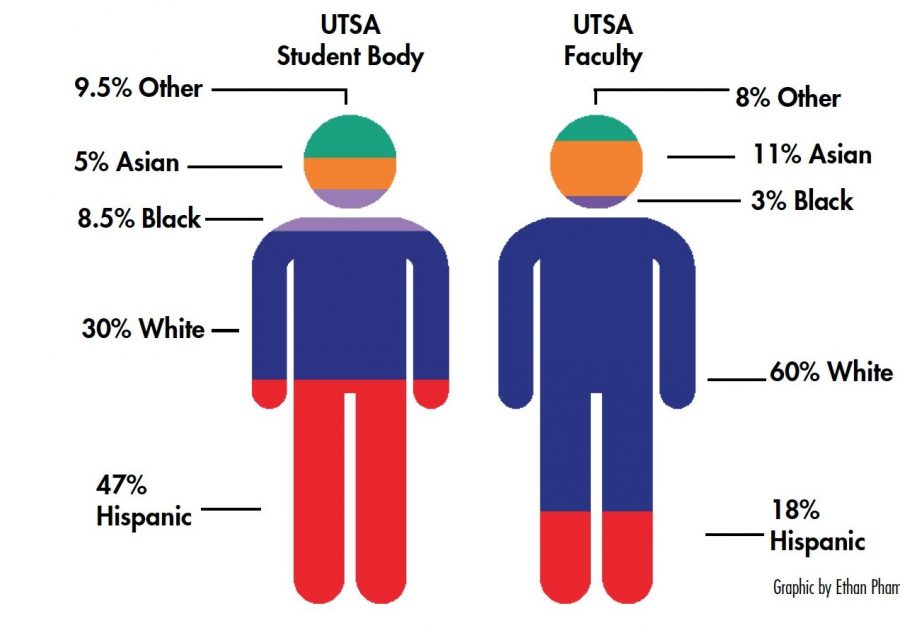 An ethnicity gap exists between students and faculty at UTSA. A question of representation pulsates in the data. The UTSA student body is made up of mostly minorities. The UTSA faculty body is mostly white.

In this country, ethnic division and strife have been contentious, making their way into the Academy Awards and the presidential election last year. I understand if you don’t want to read yet another article on race, but you should know the outcry screaming itself hoarse across America isn’t about division.

The actual outcry—what all these riots and exasperated protests really mean—is a desire for connection.

Bear with me, but read the following; you should know this before we continue: According to a UTSA Office of Institutional Research report in fall 2015 (named “History and General Information: The UTSA Fact Book,” from 2011 to 2015), consistently Hispanic or Latino students make up about 47 percent of the UTSA student population. The total minority population in UTSA’s student body is 68.7 percent. White students make up 30 percent.

Compare these percentages with faculty ethnicities in the same timespan: white faculty, 60 percent, followed by a drastic decrease with Hispanic faculty, 18 percent, then Asian faculty, 11 percent, then black or African-American faculty, 3 percent.  The total minority UTSA faculty is 39 percent. The representation of faculty teaching students with similar ethnicity is disproportionate. But why is it a problem?

Dear reader, my last name is Hobbs yet I am Hispanic. Because of my last name, professors, peers, coworkers and supervisors assume that I am white. This assumption colors other people’s interactions with me before I even meet them.

I have been told by my ethnic minority coworkers and peers that they automatically thought I was privileged because they knew my last name before they met me.

I thought of changing my last name but decided against it. I like the radical shift in opinion of me by those who assume I’m some other way because of the assumed race based on my last name. Those who get to know me realize I’m more than Hobbs and more than Hispanic.

I’m getting married in less than a week and my fiancee is changing her name from Garza to Hobbs. I know she’ll face the same assumptions I have, but she is prepared for that. All we ask of the world is connection with who we are as people, not our names or ethnic background.

The real problem the student/faculty division face is a lack of connection. Those who want a more representative faculty body as the student body feel they are not being communicated with in a way that connects to who they are as people.

This outcry is indicative of a communication issue and not a political one.

The radical shift that happens when someone assumes I’m a certain way and then gets to know me is the connection we all wish to have with every human being. The outcry to have a representative UTSA faculty comes from an earnest need in UTSA’s student body to be understood and heard, a desire for connection.