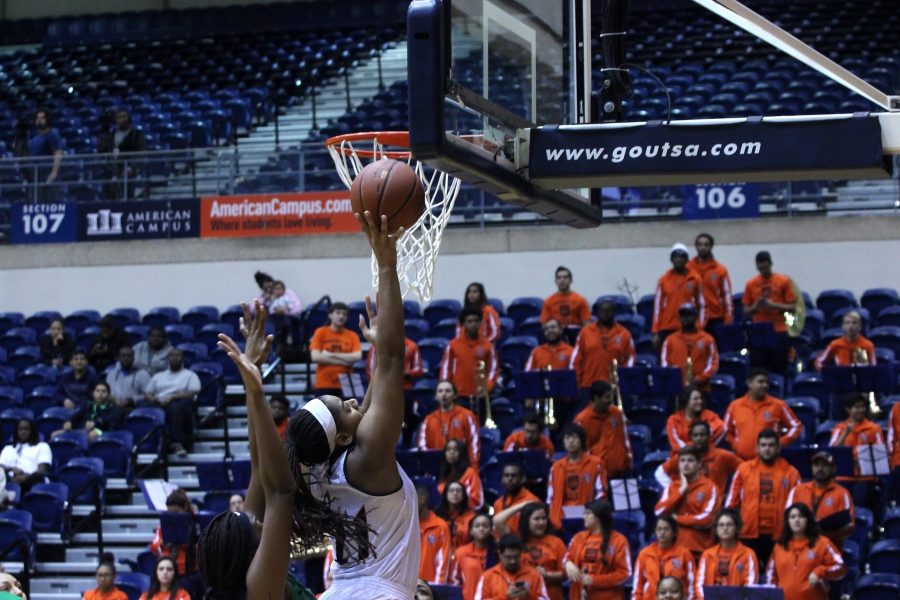 Marie Benson goes up for a layup against a Marshall defender. Enrique Bonilla, The Paisano

Throughout the majority of the 2016-17 season, the women’s basketball team has been buoyed by the play of junior guard Loryn Goodwin and senior center Tesha Smith. Not only have Goodwin (18 ppg) and Smith (14 ppg) led the team in scoring, also are currently third and tenth in Conference USA.

However, other players for the Roadrunners have elevated their play in the past two games in the Convocation Center to give UTSA their tenth win of the season, already tying last year’s win total.

On Thursday night, the play of junior guard Carlie Heineman certainly stood out, but UTSA was unable to keep up with the high shooting percentage of the Marshall Thundering Herd (12-8, 4-5 C-USA), losing 88-81.

Goodwin finished the game with 21 points and was 12 of 12 from the line. Heineman finished with a career high of 18 points, including four three-pointers.

Marshall sophomore Shayna Gore finished with 20 points. Senior forward Talequia Hamilton scored 18 points along with nine rebounds. Known primarily as a 3-point specialist, Heineman showed that she could do more, finishing with five rebounds, three assists and strong defense throughout her 38 minutes of play.

“If I’m out there for five minutes, or 40, I’m going to play hard,” Heineman said, “It’s important to be an asset in all areas of the game.”

The Roadrunners were in control for the majority of the game, but were unable to withstand Marshall’s strong shooting in the second half, finishing with 50 percent. Even with UTSA playing exceptional defense, the Herd continued to make contested baskets all game.

Heineman had a chance to extend the game into overtime but was unable to convert the go-ahead three pointer.

Smith and Goodwin finished with 21 and 17 points respectively, but Kiejdrowska’s 20 point production off the bench was key. Twelve of her points came from the three point line as well, finishing 4-7 from behind the arc.

Western Kentucky’s senior guard Kendall Noble, who is also ninth in scoring in C-USA, finished the game with 25 points on 9-14 shooting.

The Hilltoppers are one of three teams tied for first place in the conference, were favored to defeat the Roadrunners and led by as many as 12 points in the first quarter. UTSA, on the other hand, were able stay in the game and were down by only three points as the third quarter ended.

In the final four minutes of the game, Chidomere came up big for the Roadrunners, making 4 of her 8 points, including two free throws in the final minute. Western Kentucky had their chances to win, but were unable to extend the game as sophomore Jaycee Coe missed on a three-pointer during the final seconds.

The past weekend’s split over the Herd and Hilltoppers may have been a shock to some, but the women would say otherwise.

“I think that more people are stepping up and scoring. If one player is scoring 30 and no one else is, than it’s hard to win,” Heineman said. “We can beat any team in Conference USA.”

The Roadrunners will enter a two-week, four game road trip before playing Rice at the Convocation Center. (12-8, 3-6 C-USA) Feb. 15 beginning with a Feb. 2 matchup against a first place Middle Tennessee State (15-6, 7-2 C-USA).