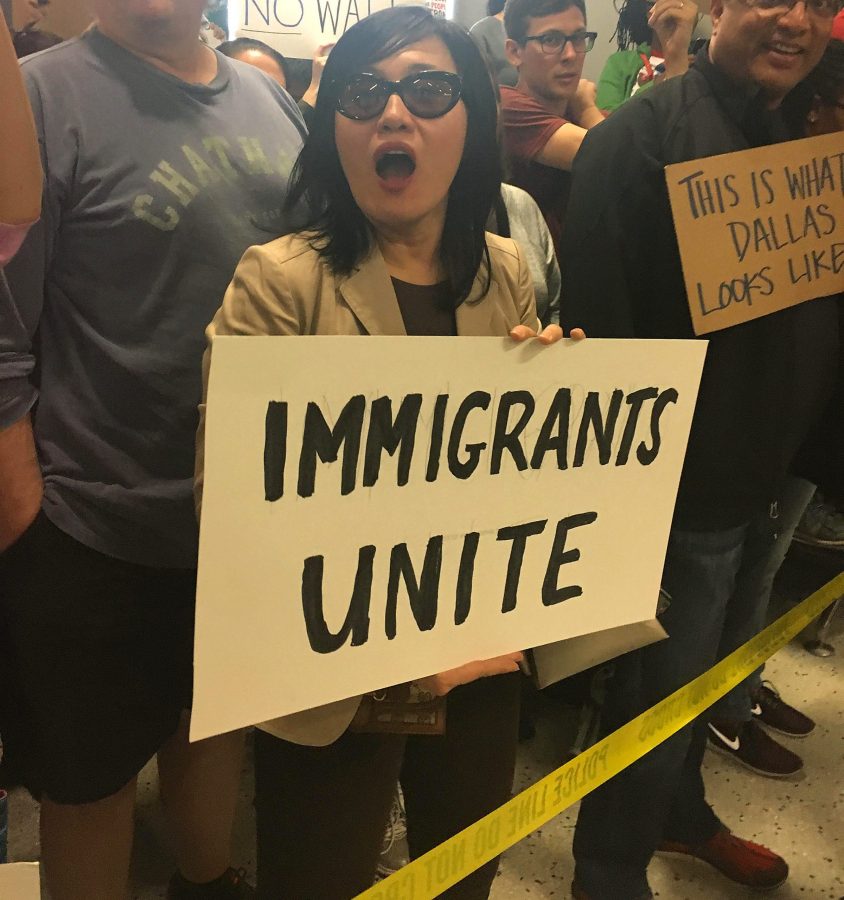 Protesters gather at DFW airport where people were detained. Caroline Traylor, The Paisano

According to Fall 2016 data from UTSA’s Registrar office, international students make up four percent of the Main Campus and 2.4 percent of the Downtown Campus student body.

On Friday, President Trump signed an executive order suspending the admission of people he perceives as threatening—from seven Muslim majority countries for 90 days and Syrian refugees indefinitely—from entering the U.S.

Trump and his top aides stated this was a national security measure and would “make America safe again!”

Over the weekend, chaos ensued. Green card holders who had returned to their country of origin to visit ailing parents were literally caught mid-air as the law changed. PhD students conducting ethnographic research abroad were unsure if they’d be able to re-enter the country. Men, women and children were detained in airports. Many Muslims claimed they were asked to share their social media platforms and describe their feelings toward Trump before they were released. Protestors gathered in terminals and the streets outside of airports to demonstrate their outrage and concern. Airport and customs officials seemed unsure how to effectively enforce the law. Twitter was flooded with panic and #MuslimBan and #NoBanNoWall were trending throughout the weekend.

This executive order was poorly designed, ill conceived, ineffectively communicated and mean spirited. It is a blemish on American foreign policy. Who feels safer now than they did before Friday?

Instead of a sense of security it created confusion. Rather than safety, it wrought angst.  Backlash from the bigoted order mobilized organic protests; crowds shut down traffic in cities across the nation. It has had the opposite effect Trump had hoped for. He campaigned on national security but with less than a month in office, the state of the union can only be described as unrest.

Frenzied university administrators urged students and scholars not to leave the country until there’s some clarity on the law.

The Chancellor of the UT System, Admiral Bill McRaven—a former admiral in the Navy who oversaw the mission that killed Osama bin Ladin—has denounced the order, along with UT Austin President Fenves

The opposite of love is not hate—it’s fear. Resist that, Roadrunners and encourage our community to do the same.