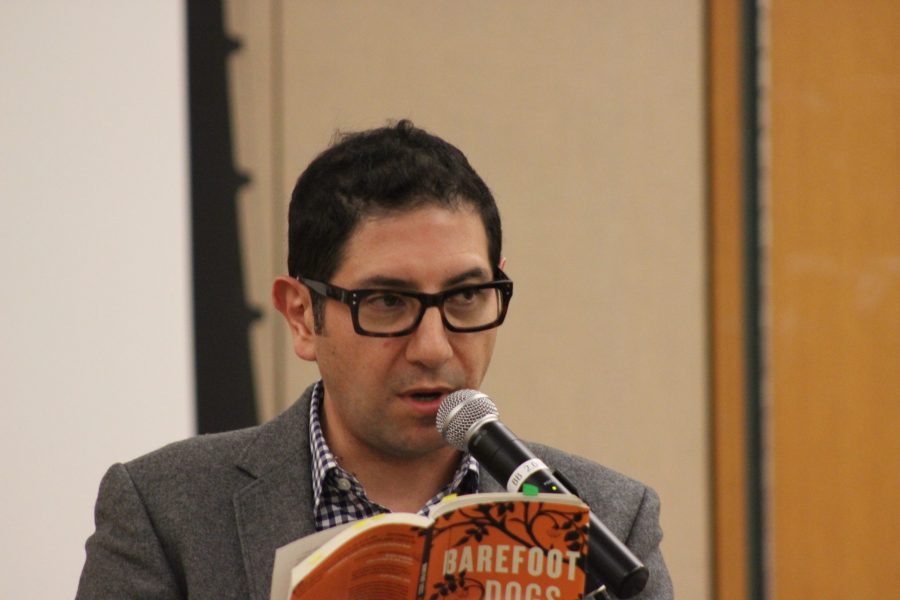 On Friday, Feb. 3, the UTSA Creative Writing Series hosted Antonio Ruiz-Camacho in a small lecture room in the Business Building. There were about 24 guests, including the event organizer Dr. Kellman, an author and a professor of comparative literature in the English department.

Ruiz-Camacho then read several passages from the book. The first passage he read was “Okie,” the second story in the book. He led the audience into the story of a protagonist in a school classroom talking to his teacher. The protagonist, a young boy, received a notebook from his school teacher. Ruiz-Camacho’s reading of the passage was intimate and childlike. Ruiz-Camacho read from the young boy grasping change through writing and coping with family drama in a swimming pool with his mother.

The next passage was a dark chunk of gritty Mexican underworld from his story “It Will Be Awesome Before Spring.” Through Ruiz-Camacho, the narrator told the audience of a brutal assault, robbery and rape of a woman in the back of a taxi cab. Two armed men hijacked the taxi cab and drove their victim around on a tour of ATMs until her daily limit had been met, swearing, beating and eventually assaulting her.

Ruiz-Camacho read two more passages to whet the audience’s appetite for his work. The first passage was from his story “Origami Prunes.” The young male narrator spoke through Ruiz-Camacho to tell the audience of the beginnings of his torrid affair with an older woman. The narrator recalled how they met at a washateria and filled the audience with the intricate shapes of cutout flesh mixed with the delicate stitching from women’s undergarments in huge tumble dryers. Trying to impress his older friend, the narrator jumps into the dryer as his childhood memories come tumbling back to him in a whirlpool of heat and chemicals.

Ruiz-Camacho finished the evening with a passage from his story, “Deers.” The narrator, a scared and undocumented young immigrant goes to work one day to find it swarming with law enforcement. The lights and sirens, however, were not there for her but for a wild bear cleverly named “Yogi” which had gotten inside the building. The conversation between the narrator and her friend devolves into a debate about the use of the plural deer versus the incorrect usage deers, as the story is titled.

The passages Ruiz-Camacho read ranged from intimate and childlike to dark and ominous. His accented voice embodied the characters for which he spoke.

The UTSA Bookstore set up a table with his books in the back and after the reading, the audience had the opportunity to mingle and get books signed. Kellman’s review of the book can be found online on the Dallas Morning News website in the Short Stories Review section. For more information on Ruiz-Camacho, visit antonioruizcamacho.com.