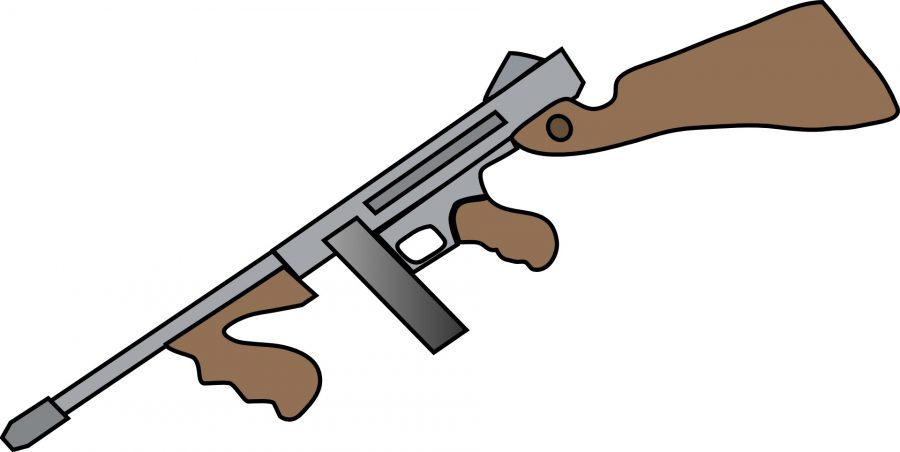 Valentine’s Day is a 24 hour period where people display their feelings toward others. Couples are able to prance around in a cloud of love and express their emotions. But in 1929 on Valentine’s Day, a display of different kinds of emotions that had been pent up for years were finally expressed. The greatest show of feelings happened Feb. 14, 1929 when South Side Gang boss Al Capone ordered a hit on seven men from the rival North Side Gang, led by “Bugs” Moran.

Let’s back up— what do Valentine’s Day and gangsters have in common? Booze. The rivalry between the two Chicago gangs was rooted in gambling, racketeering, prostitution and bootlegging. 1929 was a year of illegal speakeasies and gangsters trying to make a quick buck quenching the dry lips of the windy city. After years of border disputes and drive-by shootings, Capone was said to have masterminded a plan that would make him the only boss of the Chicago underground.

The plan started simple: hire two unknown gangsters to fabricate a story that they hijacked a truck full of high quality Capone booze and try to sell it to Moran’s boys. After weeks of planning, Capone went on vacation to Florida as a cover. Once there, he made sure to talk to a District Attorney at the time of the massacre. Chicago, on the other hand, was being pounded with snow. The killing was set to take place at SMC Cartage Co., a building owned by Moran and used as his headquarters. On the morning of the massacre, Moran did not show up to the garage because he spotted a police car outside. Little did he know he would dodge a bullet— or, rather, a hundred. Capone’s plan grew more intricate. His men would dress as police and pretend to raid the facility. Once the “cops” were inside and the North Side Gang members were unarmed and turned to face the wall, the two unknown gunman came in and the bullets began to fly.

Using the gangster weapon of choice, the Tommy gun, the seven men were mowed down within seconds. The ruthless killing ended and the four gunmen left the establishment, the two “cops” staging the arrest of the two unknown men. A short time later, the real police were called in after the (unharmed) dog of one of the victims would not stop barking. The barking caused a neighbor to go in and investigate. What he found was one bloody valentine. All seven men (Peter and Frank Gusenberg, Albert Kackellek, Adam Heyer, Reinhardt Schwimmer, Albert Weinshank and John May) were left for dead.

The citizens of Chicago were appalled by the massacre. The city never had they seen or heard of a man daring enough to order the hit of seven men. It was said after the bullet shower, the men examined the bodies to make sure they were all dead. One man moaned and he was silenced quickly with more bullets. To the surprise of many, one man was found alive and rushed to the hospital. Police questioned him on who had committed the treacherous act to which the gangster responded, “No one shot me.” He later died. No one was ever convicted of the crime.

While you’re enjoying your lovely night or day plans, just remember this piece of history and that it is not just a day for the love birds, but a day when rivals also showed their affections towards each other.