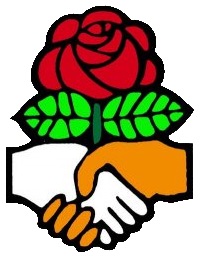 The rose is the most widely used symbol among socialists. Courtesy of DSA

In trend with the Democratic Socialists of America’s (DSA) rise in national popularity, UTSA will have a DSA chapter in its city.

“I wanted to be part of a chapter here but the nearest one was in Austin,” Metacalfe said, “after Trump got elected I decided to start ours in San Antonio.”

“You could literally see the moment Trump was declared winner,” DSA National Director Maria Svarv said in a message to new sign-ups.

Metacalfe organized thirteen invested members, many UTSA students or alumni, and now wants to extend the opportunity of membership to the San Antonio community.

The DSA reported a rise from 6,500 members in May to over 15,000 today. The rise in membership was found in Texas as well; Austin’s DSA reported over 400 new members in the month of Jan.

The association’s visibility has Senator Bernie Sanders and his presidential campaign much to thank.

“Across the country, Senator Bernie Sanders’ 2016 presidential campaign ignited a spark within the millennial generation,”

“When you think of the stigmatization against socialism, Bernie Sanders removed that,” Metacalfe added.

The socialism stigmatization had subsided since the Cold War. In Nov. 2012, the Gallup survey found 39 percent of Americans had a positive reaction to “socialism,” including 53 percent of Democrats.

The San Antonio chapter’s first public meeting will be held on Sunday, Feb. 19 at Geekdom downtown.

“The first step is organizing. Recruiting people and seeing what kind of numbers we have and what kind of outreach we can do.” Metacalfe said, “The DSA is the biggest socialist organization in the country, it unites the left-democrats, communists, anarchists— It’s about recognizing that in this country we need to start uniting those with a shared anti-capitalist ideology.”

“What appeals to me about the DSA is their ‘big tent’ and the San Antonio members willingness to help lead social activism in San Antonio,” Kristine Robb, Texas State graduate student, said, “I want to channel my frustration into positive outcomes in the San Antonio community. The DSA is a good place to converse and organize people with the same goals.”

Recruiting is an uphill challenge for new organizations, but Metacalfe intends to use the opposition to the Trump presidency as an opportunity for the chapter.

“People in the middle will see that the (DSA) are the real opposition to Trump in the next four years. We’ve already seen that the Democrats have done poorly in resisting him and I think the people who lean middle-left are sick of it,” Metacalfe said.

To find out more about the San Antonio DSA chapter, visit their Facebook page  at facebook.com/sanantoniodsa/?fref=ts