Athlete of the week: Paige Patterson 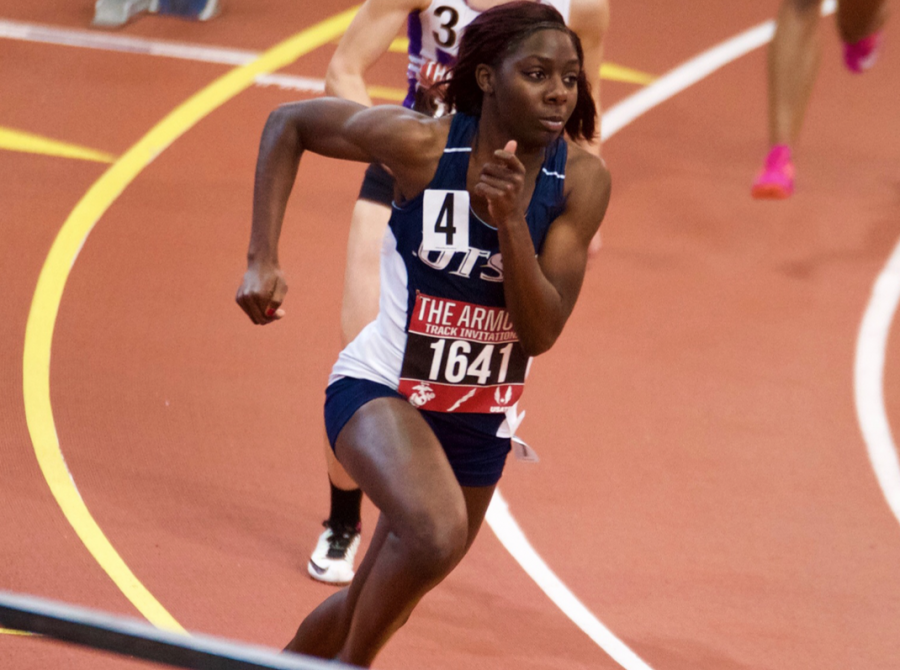 Since the age of nine, Paige Patterson has been running her heart out in track and field events. Now, as a senior on the UTSA track team, she finds herself on the brink of parting ways with the track spikes and white lines that have guided her to victory so many times.

Patterson was born in Michigan to an athletic family.

“My dad played football, my mom was a swimmer and my brother plays basketball,” Patterson stated. With those types of genes, it makes sense Patterson would become an athlete as well.

“Growing up if I wasn’t doing track I was doing basketball, and if it wasn’t basketball it was softball. I always did sports,” Patterson said. Patterson was raised in

Dearborn, Mich. where she attended Divine Child High School. While there, she dominated the track and set school records in the 200m and 400m events that still stand today. Patterson was a three-time MVP in high school and was selected to participate in the 2013 Midwest Meet of Champions as a represenative of Michigan.

Despite her success in high school, Patterson initially didn’t have plans to attend college. “I would’ve been okay with just getting a job after high school,” she stated. “I’m good in school, but it takes me a lot to succeed. I told my mom college is just not for me,” Patterson said. However, after getting offered a full athletic scholarship, Patterson decided to give college a try and attend New Mexico State.

After spending her freshman year at New Mexico State, Patterson transferred to UTSA to better her track & field career. She fit in well and found great success during her sophomore and junior year as a Roadrunner.

Patterson is on track to graduate in May, and because of her love for sports, the multidisciplinary major has plans to become a physical therapist after college.

Track has played an enormous role in Patterson’s life. “If I didn’t do track, I probably wouldn’t have done college. I met a lot of my friends through track and everything too,” she stated. “I’ve been doing it for so long, I don’t know what I would do without it.”

With this being her final season, Patterson said she can’t forget to just “have fun” and “take everything in.”  “I want to end on a good note,” she said.

There’s plenty of season left to go, but when it comes to an end, Patterson will wrap up a very long and important chapter of her life. The gifted athlete is on her final lap, and she’s here to represent the orange and blue one last time out on the track.