The Classic Theatre puts on lovely show: The Tempest 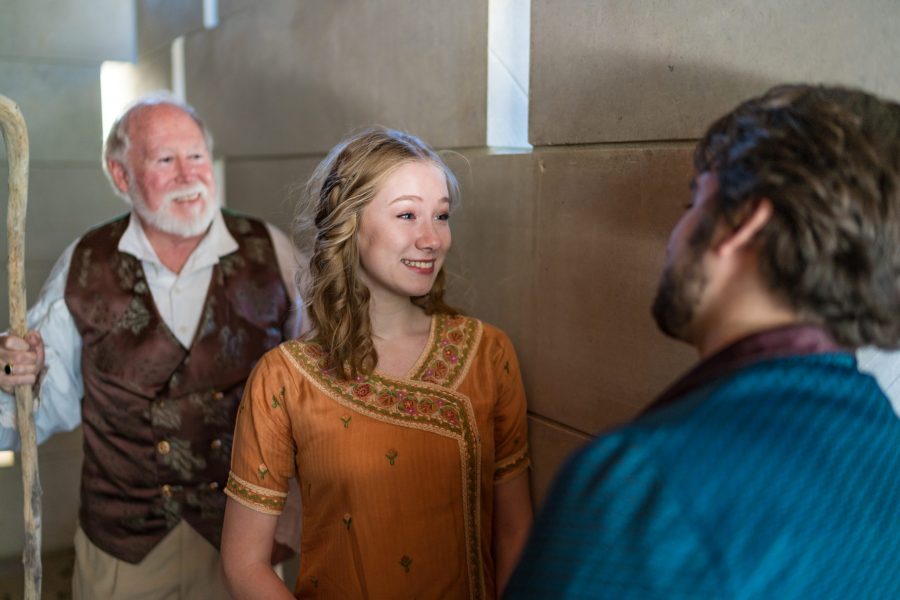 Allan Ross as Prospero, Grace Lamberson as Miranda and Hunter Wulff as Ferdinand. Photo courtesy of The Classic Theatre

On Feb. 17, the Classic Theatre of San Antonio had its opening show of its adaptation of William Shakespeare’s play The Tempest. The Tempest tells the story of the magician Prospero, who used to be the Duke of Milan before the title was usurped by his brother Antonio.

Prospero lives on an island with his daughter Miranda. One day, a ship out at sea encounters a storm.

Miranda learns her father was the one who conjured the storm  and eventually all the passengers on the ship end up on the island. The ship’s passengers were Prospero’s usurper brother, Antonio; Alonso, the king of Naples; Gonzalo, an old Milanese courtier; and Alonso’s court and followers.

The production is directed by Mark McCarver. It stars veteran stage actor and founder of the Classic theatre, Allan S. Ross as Prospero. Ross has many acting credits and awards, having won over 20 Alamo Theatre Arts Council awards.

High school student Grace Lamberson plays Miranda. Kacey Roye made her debut on the Classic Theatre stage as the spirit Ariel. The production has original music written and performed by John Coker and Kaitlin Muse.

The opening show was at full capacity. Those who arrived early enough received free bubbly champagne and scrumptious cupcakes. The Classic Theatre has a small stage with close seats that provide playgoers with an intimate experience.

The stage was set with mock bookshelves surrounding the stage and a see-through curtain so the audience could see the actors coming to the stage. The actors were in full costume, and the play uses many props and set pieces for the actors.

Like most Shakespearean comedies, the play has a pleasant ending with Miranda ending up with King Alonso’s son Ferdinand.

The play ends with Prospero dropping his magic staff, bringing an end to his reign as sorcerer on the island. The dropping of the staff cued the shut off of the lights and thunderous applause ensued.

The Tempest will continue its run until March 12, at The Classic Theatre.