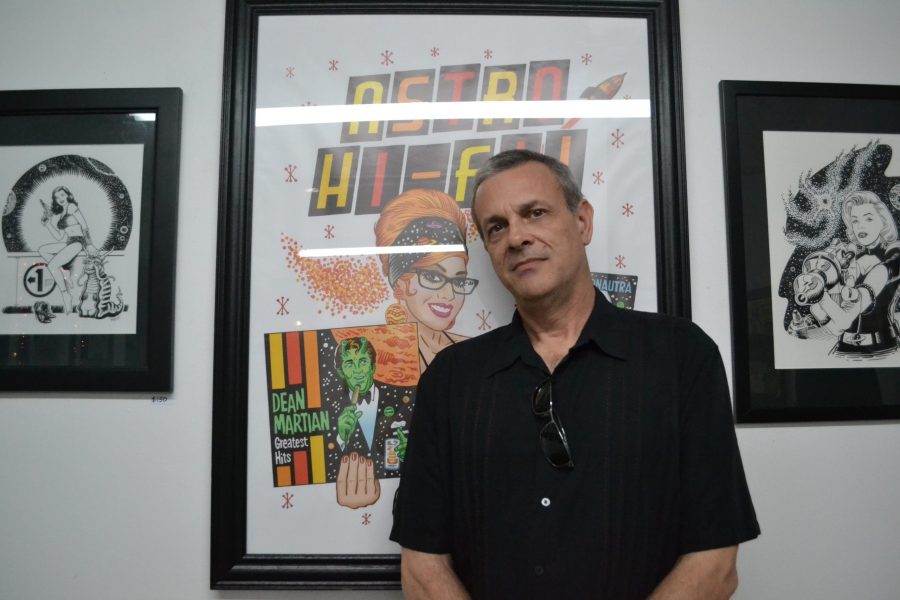 Mike Fisher standing next to one of his megababe piece of art. Nicole Rowse, The Paisano

If you like your babes from all corners of the universe, local artist Mike Fisher has you covered. His new gallery features space babes like Wonder Woman, Deep Space Vixen and Interstellar Megahottie.

“I’m a little disappointed that SA Current called my exhibit slightly naughty,” Fisher said. “I was aiming for fully naughty.”

The Black Moon Gallery at the Blue Star Arts Complex held the Beauties from Beyond collection. Every wall was filled with sexy superheroines taking charge in classic poses holding rayguns. Fisher’s original pieces start off as hand drawn black and white prints, which he uploaded to the computer where they are enlarged, modified and colored.

Fisher, who teaches cartooning at the Southwest School of Art and motion graphics at The Art Institute, said, “Cartoons are work. These drawings are beasts to create.”

The whole exhibit could be summarized as retro-futurism meets galactic fantasies, with just a touch of sexy pin-up. Fisher’s fresh take on the classics are invigorating and filled with nostalgia. Every detail is carefully placed to grab the viewer’s attention and invoke curiosity. Fisher’s comic book influence is unmistakable, especially in pieces like Deep Space Vixen, which showcases a busty blonde with one hand on her hip and the other ready with the ray gun. She’s flanked by two green aliens at the ready, simply to rumble, or, perhaps to “satisfy her weird desires.”

“Making these drawings takes a lot of time and puts me in bad mood, so that’s why I have to make sure I am drawing something fun like a gorgeous retro space lady holding an awesome raygun,” said Fisher.

As Fisher guided me through his 20+ piece exhibition, it was easy to see how passionate he is about his work. Bouncing from illustration to illustration with so much emphasis and excitement from this one to the next, it was hard not to get excited myself.

Fisher, who started drawing and collecting comic books at a younger age, described his initial interest in similar artworks as “responding to strong visuals.”

“It’s taken a long time to get where I’m at today,” said Fisher. His hard work has definitely paid off. Fisher’s latest exhibit has gained recognition and his newly patented “peek-a-booby” technology suggests there is no stopping this space-crazed local artist.