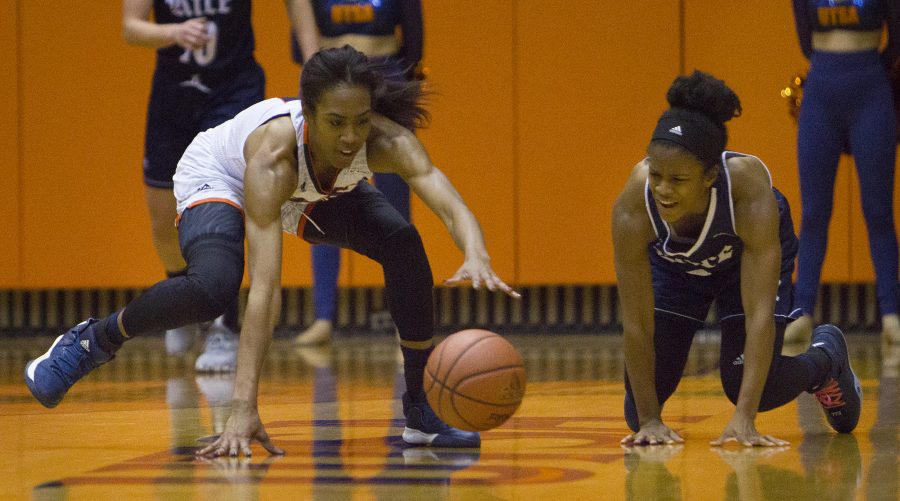 After a low scoring first quarter, the ‘Runners strong defensive showing continued as they held the Owls to a dismal eight points on 20 percent shooting throughout the second quarter. Meanwhile, the Roadrunners offense was sparked by the duo Tesha Smith and Loryn Goodwin as they combined for 15 of the team’s 28 first-half-points. Goodwin, who would finish the game with 12 points and 7 assists, hit a three-pointer at the buzzer to send the ‘Runners into halftime with a sizeable 10-point lead over the Owls.

The Owls would not fly away quietly though. As the second-half moved forward, the Owls offense began to click, cutting into UTSA’s lead. After their poor eight-point second quarter, Rice’s offense exploded to score 25 in the third.

“We just had to close out on shooters,” said UTSA guard Loryn Goodwin after the game. “We know they can shoot and once they get going, that’s it.”

The Owls were down by 14 at one point, but with under three minutes left in the game, Rice’s Nicole Iademarco hit a three-pointer to tie the game at 57 apiece. With the Owls on top, 62-61, UTSA center Tesha Smith picked up a technical foul that led the Owls to a four-point lead. The Runners were unable to recover and fell to Rice 66-61.

“After this loss, we really need to pull it together and turn this around,” said Goodwin. “We have to win the next one.”

It was the same story, different day. Once again, UTSA’s defense was strong in the first half and they even held North Texas to their lowest scoring quarter of the season as the Mean Green were only able to muster five points the entire second quarter. Despite the Runners’ offense not clicking very well, UTSA still walked into the locker-room at halftime with a comfortable 26-16 lead.

North Texas came back after halftime and cut into UTSA’s lead in the third quarter. At one point, North Texas only trailed by one with the score at 34-33. However, the Runner’s went on a mini 5-0 run to end the quarter and entered the fourth with a six-point cushion.

In the fourth quarter, North Texas went on a 9-2 run to cut UTSA’s lead down to one once again. The ‘Runners found themselves desperately clinging to a 43-42 lead with under six minutes to go in the game. The two teams traded blows, and UTSA was able to fend off the Mean Green for nearly the remainder of the game. With just seven seconds on the clock, the ‘Runners held a 51-48 lead. The game was all but won for the Roadrunners, but North Texas guard Candice Adams had other ideas. Adams sucked the life out of the Convocation Center as she knocked down a three-pointer at the final buzzer to tie the game at 51 and send it into overtime.

UTSA was only able to score four points in the overtime period, and North Texas walked away from the Convocation Center with a 58-55 victory, handing the UTSA women’s basketball team their fourth straight loss.

With only four games left in the season, UTSA will have to win out in order to finish the season with a winning record. They will be back in action at the Convocation Center Feb. 23 against FIU and Feb. 25 against Florida Atlantic.