The art of being Nasty Women (COMMENTARY) 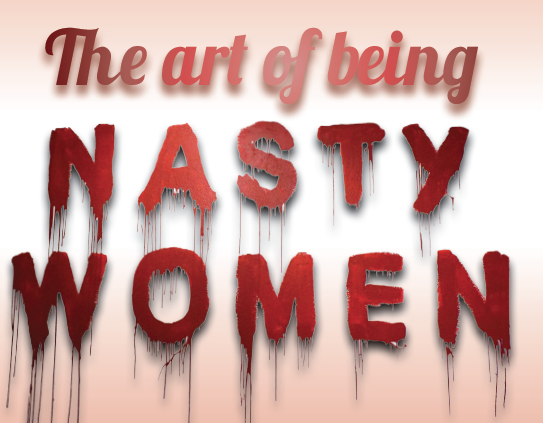 Unfortunately we live in a time of hostility toward minorities. As a Mexican-American woman in a world that attempts to quiet me, I was glad to have witnessed the Nasty Women art exhibit. The history of Nasty Woman is relatively short, starting when then presidential candidate Donald Trump called his opponent Hillary Clinton a “Such a nasty woman.”

The Internet exploded in response and the flames have only grown brighter as women everywhere are embracing their inner nasty woman. The Nasty Women movement is another log thrown in the fire of equality, and embraces the ideals that other movements are continuing to fight for.

Being greeted with the strong voice of a woman dressed in black and the smell of  incense wrapping around the room was just the beginning of accepting who I am as a Mexican-American woman. The Nasty Woman art exhibit was an eye opener but not just politically; it also helped me get one step closer to accepting that sexuality is okay. Sexuality is an acceptance of who you are and what you want, and that concept has always been difficult for some, including me, to accept.

The event was showcased artists who stand for women’s rights. The main focus, the female body, was featured in beautiful dances and songs performed by women of all shapes and colors. The most memorable performances included a dance to words by Chicana cultural theorist and feminist Gloria Anzaldúa as well as a dance performed in front of a sheet made to look like a vagina. Looking at these women, I realized hit that they were like me. They have curves, needs, wants and spoke Spanish. These women embraced a side of themselves that I never knew I could accept. Their bodies were beautiful in their own way. I suddenly stood a little taller and felt a little better about my curves and dark lipstick.

Nasty Woman is a battle cry that encompasses the LGBT+ community, reproductive and health care rights, education, gender and racial equality. Nasty Woman is a movement that gives a voice to those who have been silenced. This San Antonio exhibit showcasing the work of people supporting Planned Parenthood was encouraging and helped me discover that I have a voice, and that I can accept my sexuality without anyone telling me to stop.

Nasty Woman was not the only event that helped support these issues; Legislate This! San Antonio 2017 was also a great event that helped people come to terms with the political situation while reminding the audience that they are loved and have a voice. These events were comforting and were a huge step in accepting that my curves are beautiful, my voice matters, my body is mine and I can speak my Spanish dialect and wear my lipstick whenever I please.