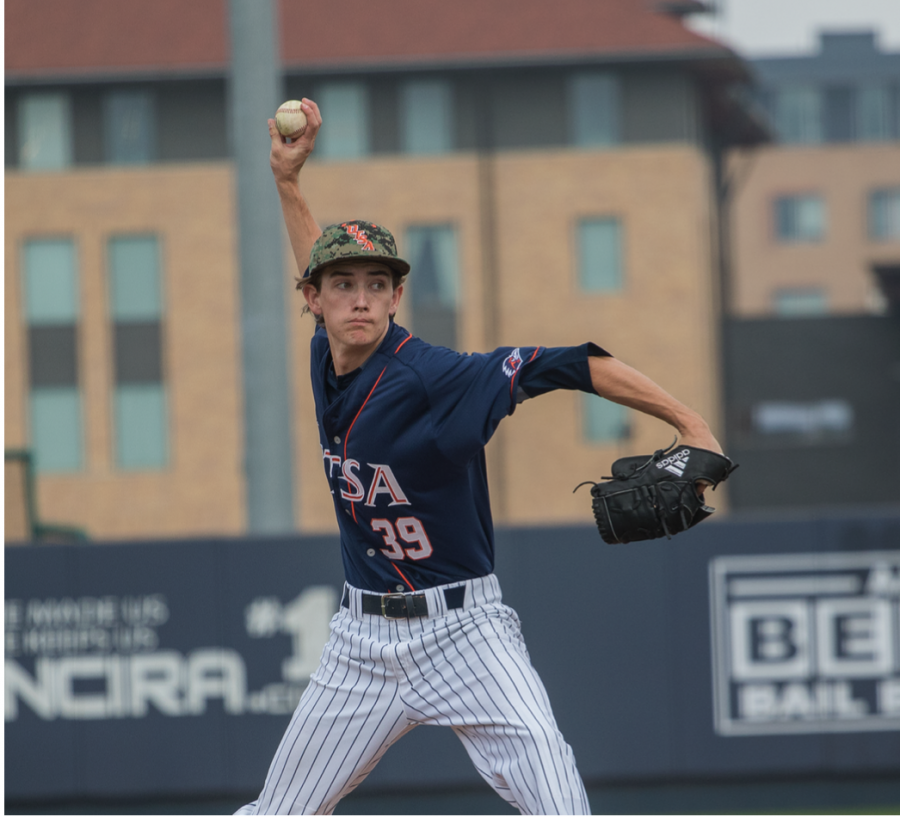 Freshman Hunter Mason gets ready to deliver the pitch. Tristan Ipock, The Paisano

The series began with a doubleheader on Friday. Utah piled on six runs in both the second and third innings, two runs in the fifth inning and three runs in the seventh inning. UTSA earned one run in the first inning and two in the sixth inning. Due to the 10 run-rule, the game was called after seven innings.

Senior center fielder Kevin Markham went 2-for-3 at the plate while Jesse Baker went 2-for-2. Markham leads the team with a batting average of .487. Sophomore second baseman Bryan Arias also contributed at the plate by going 2-for-3 and hitting UTSA’s only home run. Sophomore Karan Patel got the start on the mound, but only pitched for two innings. Sophomore Derek Craft, freshman Ben Ostrominski, freshman Cade Bullinger and sophomore Jake Harrison came in for relief. Patel received the loss (0-1). The final score was a lopsided 17-3, but Utah would face a different Roadrunner team later that day.

The Roadrunners did better on the mound as well as at the plate during Game 2 of Friday’s doubleheader. Once again, Markham contributed at the plate, going 2-for-4. Left fielder Skyler Valentine also did good work for the ‘Runners, driving home two RBI’s. UTSA came out strong, scoring one run in the first inning and seven runs in the second inning. The high scoring second inning began when Arias hit a double to right field.

He eventually advanced to third base and scored off two wild pitches. Four consecutive walks gave UTSA another run, followed by several big hits from Markham, Valentine and third baseman Chris Estrada. The scoring continued and by the end of the inning, UTSA led 8-0. Utah put up one run in the third inning, and one run in both the seventh and eighth innings.

Senior Nolan Trabanino got the start for Game 2. Trabanino struck out five Utah batters and allowed five hits and three runs during his time on the mound. Junior Tyler Giovanni came in during the eighth inning and se- cured the lead. Giovanni finished the game with five strike outs, allowing one hit and no runs. The final score of Game 2 was 8-3. Trabanino was awarded the win (3-0).

Saturday’s game was cancelled due to the weather.

On Sunday, the Roadrunners met the Utes for the last game of the series. Utah came out determined to finish this series with a win, scoring four runs in the second inning, one run in the seventh inning, and two more runs in the eighth inning. UTSA’s sole run came in the fifth inning after senior C.J. Pickering got on base by hitting a single to left field. He then advanced to third base when junior catcher Tony Beam doubled to center field.

Beam had the only multiple-hit game, going 2-for-3 at the plate. The run came in when freshman shortstop Aldo Buendia hit a ground ball to second base, advancing Pickering past home plate. Junior Steven Dressler started the game and pitched for 4.2 innings. Junior Chris Muller, senior Karl Craigie, and junior Chance Kirby came in as relief. Dressler received his first loss of the season (0-1). The final score of the Sunday game was 7-1.

The Roadrunners are now 6-5 overall. On Tuesday, UTSA will head to San Marcos to face I-35 rivals, the Texas State Bobcats.