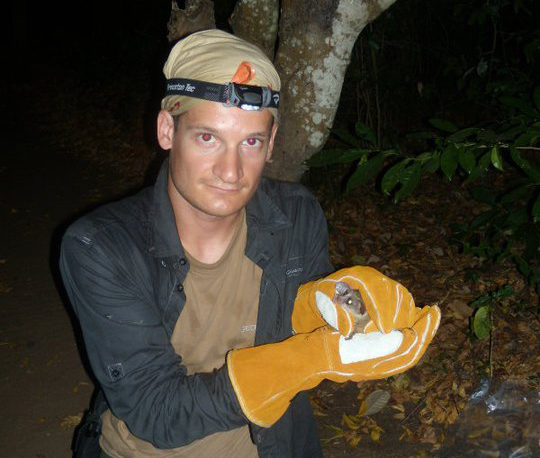 he main goals of Pozzi’s work are to 1) document primate biodiversity, 2) explore the dynamics of diversification, such as the ecological and evolutionary driving factors that shape diversifica- tion in time and space, and 3) understand how primates respond to human-induced environmental and climatic change. Courtesy of Dr. Luca Pozzi

UTSA anthropology professor Dr. Luca Pozzi was recently featured in a National Geographic article about the discovery of a new species of galago, more commonly referred to as bush babies.

“Recently this month we described a new genus, which was part of the study,” Pozzi said. “Some of my colleagues were involved in the discovery of a new species in Angola.”

“Biological anthropology is the study of humans and everything related to humans. Mainly dealing with primates,” Pozzi explained. “Most of the time we are working on things related to humans and trying to understand human evolution or adaptation in general.”

National Geographic got in touch with Pozzi because of his expertise on primates, lemurs and bush babies.

“Im proud of Dr. Pozzi, and it’s a blessing he was featured,” said Malik Magonin, sophomore political science major, who is in Pozzi’s intro to biological anthropology class said. “He’s a great professor whose knowledge in anthropology and monkeys will take him far in life. Colleagues should appreciate him and what he does. I love him as a professor.”

Because of his field of research, Pozzi has been on expeditions to places around the globe such as Madagascar and the Amazon Rainforest.

Bush babies can be found throughout Africa anywhere below the Sahara desert. There are 18 known species of galagos. Their sizes vary as some species are six inches and others can grow to be the size of a house cat.

It is hard to differentiate between species of bush babies because of their similar appearances.  The best way to distinguish a bush baby is by listening to the call it makes. Each bush baby has a species specific call they use for mating or to mark their territory. Dr. Pozzi’s colleagues were excited when they were in the jungles of Angola and heard a new undiscovered species of galago.

Bush babies are very hard to study. They’re nocturnal and they sometimes can be found live in some countries that are politically tumultuous.

“It’s a great discovery,” said Pozzi to National Geographic, “It just explains how much we still have to know about these animals.”

One of the ways scientists can differentiate between existing bush babies and possibly discovering a new one, is by studying their morphology. Looking at both interior and exterior morphology, anthropologists can see if they’ve discovered a new species.

If students are interested in anthropology and research like Pozzi’s there are many different kinds of anthropology classes offered at UTSA.  Dr. Pozzi recommends reading up onprimatologists like Alison Jolly and Jane Goodall for useful information on primatology.

UTSA has a noteworthy anthropology department and some courses even include class trips in their curriculum.

Students interested in reading the National Geographic article Dr. Pozzi was featured in can visit http://news.nationalgeographic.com/2017/03/bush-baby-new-primate-species-angola/.