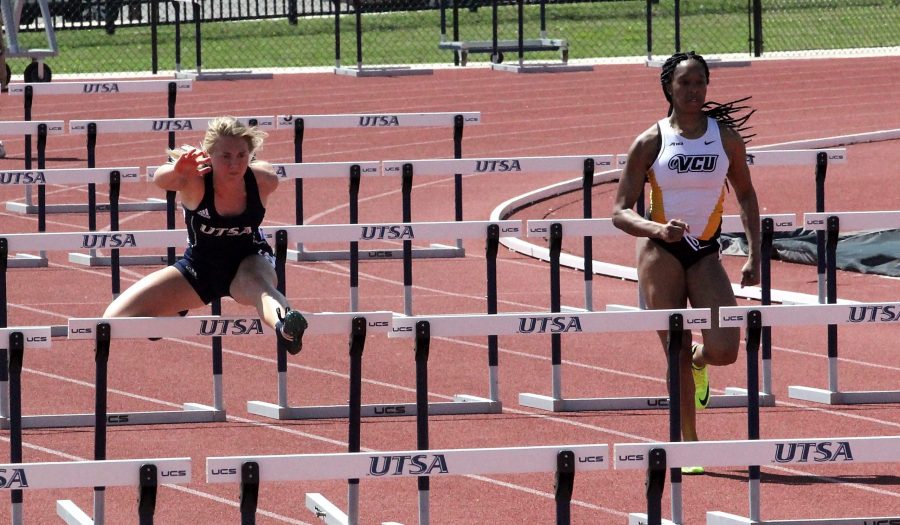 Across the nation, the indoor track and field season has now come to a close. It’s now time for athletes to start braving the hot sun and various elements as the season transitions from indoor to outdoor. The outdoor season officially kicked off this past weekend right here in San Antonio at Park West Athletics Complex. The UTSA men’s track & field team looked to defend their home track this past weekend as they hosted the annual Roadrunner Invitational.

Schools such as Baylor, Texas A&M and even Virginia Commonwealth University flocked to San Antonio to compete for the first team title of the outdoor season. The UTSA men’s track and field team would have their work cut out for them as the invitational featured a slate of tough colleges, but right from the start it was apparent the Roadrunners were ready to compete at a high level.

After day one, UTSA led the seven-team field by a very wide margin of 22 points. The shot-put podium featured a trio of Roadrunners. UTSA, led by Tyler Finke, swept the shot-put event. Finke registered the best throw of his career with a distance of 17.44 meters. Despite the throw being the best of his career, Finke stated that “there’s room for improvement” and went on to say “I’m very excited for the rest of the outdoor season.”

Aside from the shot-put event, UTSA junior and Jamaican native Adrian Riley dominated the decathlon event on Friday. Riley set personal records in the hurdles, long-jump, 100m and 1500m events en route to a whopping 7,318 point total. Not only was his point total to earn him top spot at the Roadrunner Invitational, it was good enough to earn him the top spot in the country among all D1 decathlon athletes.

Riley’s enormous point total is the best in the nation, and it certainly helped UTSA have a successful day one at the invitational.

On Sat., Riley continued to dominate, winning the discus throw, javelin throw and the pole vault. Also, senior Victor Perez placed second in the hammer throw event with a throw of 57.74 meters. Despite Montgomery Bertschy taking first place in the 1500m race for the Roadrunners, Texas A&M was able to close the gap on UTSA.

Texas A&M seemed like a completely different team once Saturday rolled around, and it was evident they came ready to dominate. The Aggies took first place in the 100m, 400m, 3,000m, 4x400m relay and the 4x100m relay. A&M also placed second-fifth in the 800m race while William Maraggia from their sister school of A&M Corpus Christi took home first place in that event. UTSA’s Patrick Prince was able to do some damage control by winning his 110m hurdles event, but by the end of the day it was clear that UTSA and A&M were the top two schools in the field.

Unfortunately, A&M was able to pull away from the ‘Runners on the final day of competition and they took the Roadrunner Invitational gold medal back to College Station with a team total of 231 points. However, UTSA walked away from the invitational with a silver medal and a second place title. Their second place finish is not bad for the first outdoor track meet of the season.

After a solid team performance, the expectations are high for the rest of the season. “We are off to a great start this season,” said Head Coach Aaron Fox.
“I thought we competed very well and am looking forward to the rest of the season.” UTSA men’s track and field will be back in action March 29 at the Littlefield Texas Relays.