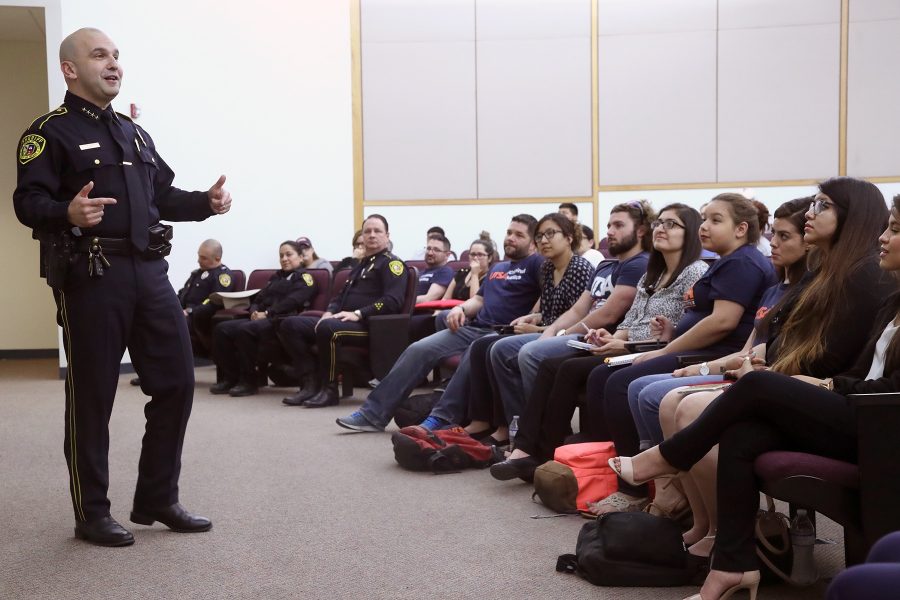 On Tuesday March 21, Bexar County Sheriff Javier Salazar informed students and faculty about current issues  in the Sheriff’s Department, including the sanctuary city status. Salazar said that San Antonio is choosing to cooperate with U.S. Immigration and Customs Enforcement (ICE) in the detaining of unlawful immigrants in the U.S.

On Feb. 28 of this year, the Refugee and Immigrant Center for Education and Legal Services (RAICES) submitted a petition directly to Salazar’s office demanding the sheriff’s office no longer voluntarily cooperate with ICE. Salazar’s office made no comment about this petition or the policy platform RAICES delivered and did not respond to the invitation of a town hall meeting.

“By refusing our invitation to a community town hall without even a public statement, Sheriff Salazar is playing politics with people’s lives. Enough is enough,” RAICES representatives stated in a recent media release.

UTSA professor Henry Meade and students of the criminal justice honors fraternity Alpha Phi Sigma booked the sheriff to speak in their conversation series titled Straight Talk. At this event students were encouraged to ask questions regarding Salazar’s career and vision for San Antonio.

When asked about his reasoning for cooperating with ICE, Salazar made it clear he was elected to protect and serve, not lead based on personal opinion. Using the example of Travis County, with Austin being a well known sanctuary city, Salazar spoke passionately about what San Antonio had to lose if they did not cooperate.

Austin lost approximately $1.5 million in grants after Governor Greg Abbott’s announcement to cut funding to cities that did not cooperate with ICE investigations concerning legal status of a person under lawful detention of arrest. Salazar said he was initially for the idea and asked his cabinet to look into the matter of maintaining sanctuary city status.

San Antonio stands to lose approximately $9 million dollars in state funding if it does not cooperate with ICE detention requests. This substantial amount would take away from programs such as rehabilitation for juvenile delinquents, rehabilitation services for victims of rape and rehabilitation of domestic violence victims.

Salazar told the audience that the victims of these heinous crimes need to be attended to and San Antonio could not afford to lose these programs. The sheriff view said he would much rather cooperate with ICE, who does not always deport detainees, than abandon those who need serious help.

Salazar recognized the need to help refugees who have nowhere else to go, but his view on the community put San Antonians as a priority. “It was a battle we could not afford to fight,” said Salazar.

Salazar closed the evening thanking the community for their continued support and offering students the opportunity to create an open dialogue with the Bexar County Sheriff’s Department.