Athlete of the week: Jeff Beverly 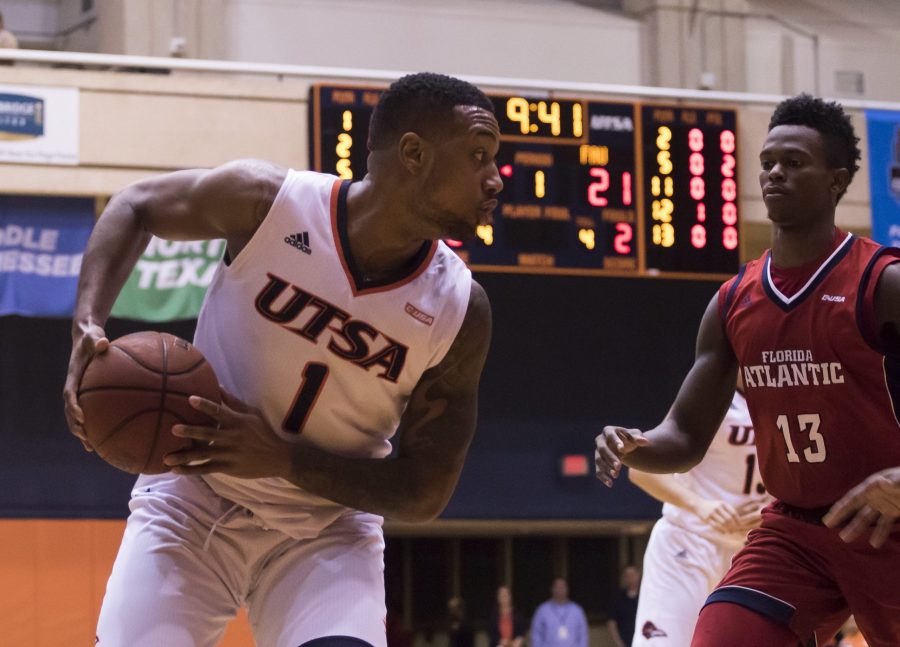 Beverly scans the defense for his options. Tristan Ipock, The Paisano

“I do yoga,” said Jeff Beverly, “I like to do hot yoga.” Doing yoga in his free time may be giving the Roadrunner standout forward a leg up on his competition (possibly two), but Beverly’s gritty play has more to do with his upbringing and passion for basketball.

Born in the small town of League City, Texas, Beverly sprouted into a six foot six, 250-pound powerhouse. In high school, he caught the attention of UTSA scouts, averaging 22 points and 11 rebounds a game as a senior. Despite his superb performance on the court, the Roadrunners decided to withhold a full-ride from Beverly.

After being offered a number of scholarships from mid-major schools in and outside of Texas, Beverly elected to stick close to home when he decided to attend Texas A&M Corpus Christi. At A&M CC, he averaged 8.2 points and 3 rebounds and made the honor roll.

Like many college students who stay close to home, he began to lose interest in the same familiar surroundings. As a result, Beverly relocated to McLennan Community College in Waco, Texas. Beverly used McLennan as a jumping off point for football.

Beverly never played organized football in high school because his mother, a nurse, prohibited it. Now in college, Beverly chose to take his talents to the gridiron and put basketball on hold. With a prototype tight end’s body, can you blame the man?

After setting his mind to play football, Beverly drew attention from Division I schools after he posted videos of himself working out with a trainer on YouTube and Twitter. Through excellent self-awareness and self-promotion, Beverly’s tactics worked and the school that had eyed him in high school for his dunking came calling.

UTSA offered Beverly a chance to walk-on as a tight end on the football team; He filled a much needed void on the team. Anyone that has played the game of tackle football agrees that the game is not for the faint of heart. Football is a precisely calculated game where brain meets brawn. Violence is not only encouraged – it’s mandatory.

During the 2015 football season, Beverly dedicated himself to the team and suffered through the gruel- ing summer workouts. After fulfilling his lifelong dream of playing football, Beverly realized where his passion truly was. A gifted athlete can succeed in almost any sport they set their mind to, but in order to be great, you’ve got to have passion for the game

After one season on UTSA’s football team, Beverly again altered his path in life and opted for the sport he was meant to play: basketball.

Since joining the team and undergoing a coaching change, Beverly has become the best scoring option on the team; a certified cold-blooded assassin when he’s locked in and
a brute force in the paint. He’s a beast in the classroom, too. Beverly makes excellent grades.

Thankfully, for ‘Runners men’s basketball fans, we have another year of Number 1 before he follows his passion for hoops as far as it takes him. With his unique size, skill set and will to succeed, do not be surprised to see Beverly in a basketball uniform for many years to come.