CAMMIE distributes awards to mark the end of CAM 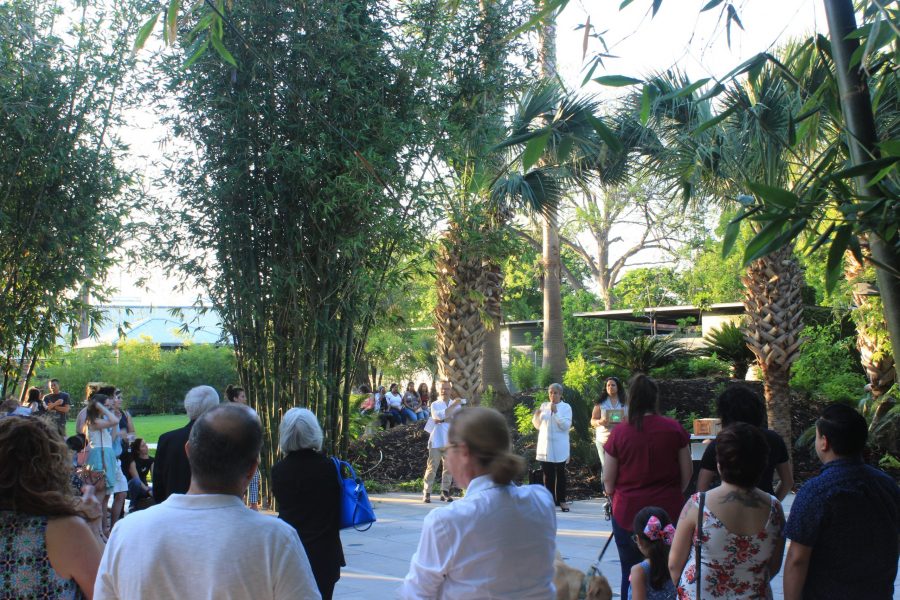 A handful of awards were gifted. Enrique Bonilla, The Paisano

March 31 marked the end of contemporary art month or CAM as it is colloquially referred to. The month-long citywide art event focuses on local artists and attempts to spread knowledge on the growing arts community in San Antonio by helping artists spread their art to galleries beyond the city.

CAM also celebrated its most inclusive perennial by hosting an open call to artists unlike previous years; curators then chose from a list to visit exhibits, a tradition they will continue for future CAMs.

The closing of CAM also brings with it the CAMMIE awards; an evening where participating art spaces award the exhibits involved in CAM. The event also doubles as the closing reception for the Spare Parts Mini Art Museum’s new printmaking show “Fine Print,” an ant-sized art gallery.

The free family friendly event takes place at the Linda Pace Foundation’s CHRISpark in the southtown district. The winding walkways provided a perfect place for children to run and play while parents take in the exhibits inside of SPACE, the free gallery within the park. Adding to this family friendly environment was the HoneySuckle Teatime pop-up providing intricately designed milkshakes and treats for kids and the Bellion Spirits pop-up providing wine and cocktails for parents.

As the sun reached the horizon, a large crowd of eccentrically dressed audience members and their furry friends gathered near the front entrance of the park in the orange-yellow light of sunset for the award ceremony. Executive Director of Artpace Veronique Le Melle was the first to award a CAMMIE, but not before delivering a compelling, passionate speech on how Trump’s proposed budget will affect the arts. President Trump has drafted a budget plan, which would eliminate the National Endowment for the Arts, the National Endowment for the Humanities, the Institute of Museum and Library Services and the Corporation for Public Broadcasting—a $971 million cut from culture preserving institutions. This federal budget plan along with cuts to the state budget means arts funding is disappearing not only from state legislatures, but arts and education funding for school children in Texas.

Le Melle went on to deliver the Artpace award to Cinnabar for the show “Magic Time Machine” featuring Ana Fernandez and Hiromi Stringer. Blue Star Contemporary’s director Mary Heathcott awarded their award to Nathan Felix and the choir members of From Those Who Follow The Echoes for the most aurally stimulating exhibit.

The Southwest School of Art’s director Mary Mikel Stump presented their CAMMIE for most poetic exploration of a singular color to Jessica Halonen’s “The Blue Hour (A Clock Stopped).” The people’s choice award, voted on by the community of San Antonio, went to Jose Bali for his show at Agora entitled “Border & Bougie.”