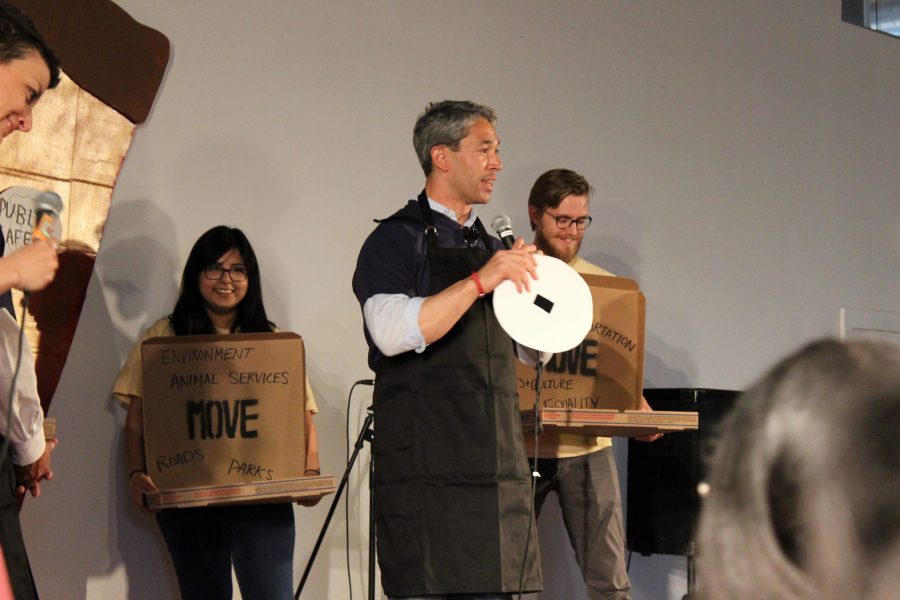 How do you get a performance of Selena’s “Como La Flor,” readings of Maya Angelou and a Nicki Minaj impersonation (complete with pink wing)under the same roof as a giant make-your-own paper pizza slices where the toppings have public policy issues written on them? You host a candidate forum where city council and mayoral hopefuls show constituents their talents and assemble their ideal “slices” of good governance.

That was the scene this past Saturday at Brick, where local non-profit MOVE San Antonio held their “San Antonio Night Live” candidate forum hosted by SA 2020’s Molly Cox.

First on the night’s agenda was pizza slice construction. Manuel Medina and Ron Nirenberg, two candidates running for mayor, each had a go at putting together a four-topping pizza, including a “special sauce” representing their priority issue. Nirenberg stressed the need for “multi-modal development” of San Antonio’s transportation infrastructure.  Medina, for his part, discussed the need to address San Antonio’s education system, stating that “resource inequality” is his priority.  A crowd of about 300 watched as each of the district candidates went through the activity, cheering their approval when a candidate said something that struck a chord.

After all the pizzas were “baked,” crowd members were asked to cast real time support votes for their preferred candidates using their smart phones. As the tallies came in, the results were projected onto a large wall behind the stage for all to see.

Next up was the talent portion of the program. The audience readied their Snapchat accounts, moving in closer to the stage. Whether it was 9th District hopeful John Courage, who had everyone slightly nervous when he began undressing before “Ya’ll ready for this?” helpeded avert the awkwardness by playing over the PA, timed with his reveal of his custom made “Courage” Spurs jersey—or it was Rick Trevino, a candidate for 6th District who performed “Blackbird” by The Beatles, one could tell the crowd was charmed by the sound of mingling and laughter.

The synergy of work and play is MOVE San Antonio’s signature tactic in getting young people interested in politics. Matt Trevino, a MOVE Spring 2017 fellow and UTSA alumnus, says MOVE combines politics with panache. “Our entire team is composed of students and recent grads,” he said, “and we get it—time’s short and there is almost certainly an assignment deadline looming—so we do our best to meet students where they are and to keep our events lively. Our approach was on full display at the candidate forum. When was the last time you heard a candidate discuss their vision for the city shortly before jumping into a Selena cover or a polka performance?”

Marissa Colunga, a junior English major, says events like this disprove the stereotype about young people. “I don’t think it was ever true that we don’t care about politics. Educational differences in the 8th District and LGBTQ issues are important to me. There’s this belief that we’re stupid. We’re not.”

Walking around Brick, one could see a bevy of cameras from local news stations, plenty of local organizers ready to network and exchange contacts and young people holding beers, but listening with a keen ear.

Michael Black, anthropology senior and MOVE Spring 2017 fellow, was attracted to the non-profit because, to him, MOVE understands that if you give young folks a reason to come, a reason to stay and a reason to go vote, politics will be more exciting.

“I believe in democracy; I think it is the best way to make a government as representative as possible. Working with MOVE gives me the opportunity to help folks navigate the democratic process  and become more engaged,” he said.

Rebecca Garcia, a graduate student in business, said it was smart for MOVE to invite local blues-psych fan favorites Lonely Horse to play during the event’s intermissions. To her, this boosts turn out and demonstrates that these worlds overlap. “I love the emerging arts and culture here in San Antonio. The fact that I can see them play and get exposed to politics at the same time is really cool.”

Both Colunga and Garcia mentioned that they desired a more in depth treatment of education policy that their council representatives offered.

The event’s grand finale featured Ron Nirenberg winning the “golden banana” for being the crowd favorite. The bananas are a day one inside joke at MOVE since they like to register voters in robot and banana costumes.

H. Drew Galloway, MOVE’s executive director, closed the night on the mic with a thank you to everyone and a clever injunction: “I got you all to come here tonight, stand in line and vote three times. On May 8, I want you all to stand in line again and vote only once.”