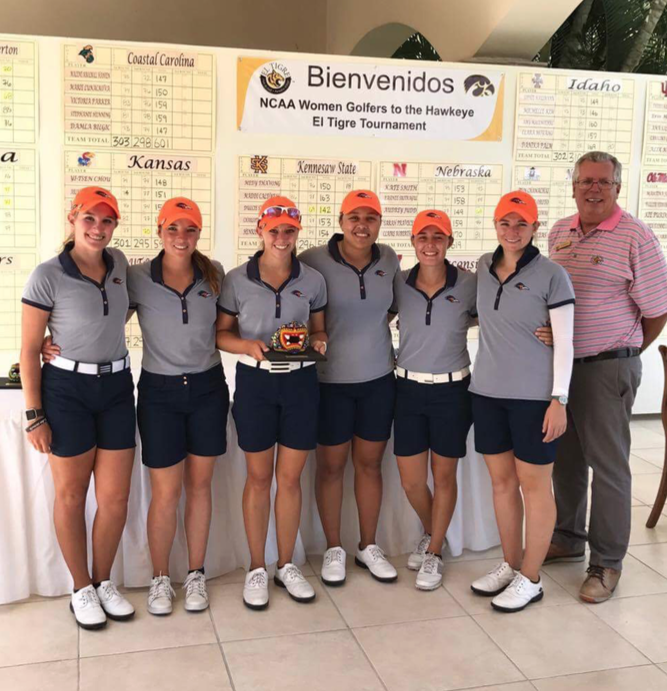 The team takes a group photo with their trophy. Photo courtesy of UTSA Athletics

Last week, the UTSA women’s golf team travelled to Mexico to compete in the “Hawkeye El Tigre Invitational.” Big schools such as Kansas, Ole Miss, and Washington made the trip across the border to the scenic, coastal city of Puerto Vallarta, Mexico. All in all, there were 79 players from 14 schools that competed in the tourney.

Junior captain Nikki Long has been having an incredible season. She kept it going at the invitational by finishing in the top five for the third time this season. Long finished tied for fifth place while her teammate Julie Houston finished in the top 10 with a tie for ninth. Long finished the tournament with an impressive one over par after shooting a 71 in the final round.

“The course was beautiful but difficult,” said Long. “Most of the holes had water, and the greens were very sloped.” Even though Long and Houston posted the best two finishes for UTSA, the other women weren’t far behind. Madison Kidd and Aimee Ponte both finished in the top 20, while Becky McGeehan rounded out the team of five at a tie for 31st with a 10 over par. “We really played this course solid,” said Long. “That’s why we almost came out on top.”

“We were disappointed that we lost by just a single shot, but we shot one of our best tournament scores, and we’re happy with the way we played” said Long.

Perhaps one of the reasons why Washington was able to stay in the lead as a team was Wenyung Keh. She shot an incredible score of 66 in the final round to propel Washington to the victory.

The UTSA golf team participated in the tournament in years past, but it was the first time playing internationally for this group. Like most tournaments, the trip was supposed to be strictly golf-oriented, but they may have lucked out just a bit. “It was so much fun,” said Long. “Our flight actually got moved so we got to stay an extra day and go to the beach. It was awesome.”

The players were able to enjoy the white sandy beaches of Puerto Vallarta and unwind after a tough but successful tournament performance.

The UTSA women’s golf team has quietly been having a great year, and after their performance in Mexico, they’re among the favorites to win the conference tournament. The C-USA conference tournament is just around the corner, and Long believes the team has a real shot at winning all the marbles. “We’re really peaking at the right time,” she said.

If Long and the rest of the team is able to keep playing the way they’ve been, they have a good chance of winning it all. “Last year we sort of fizzled out near the end,” said Long. “But this year, I’m looking forward to finally getting a ring.”