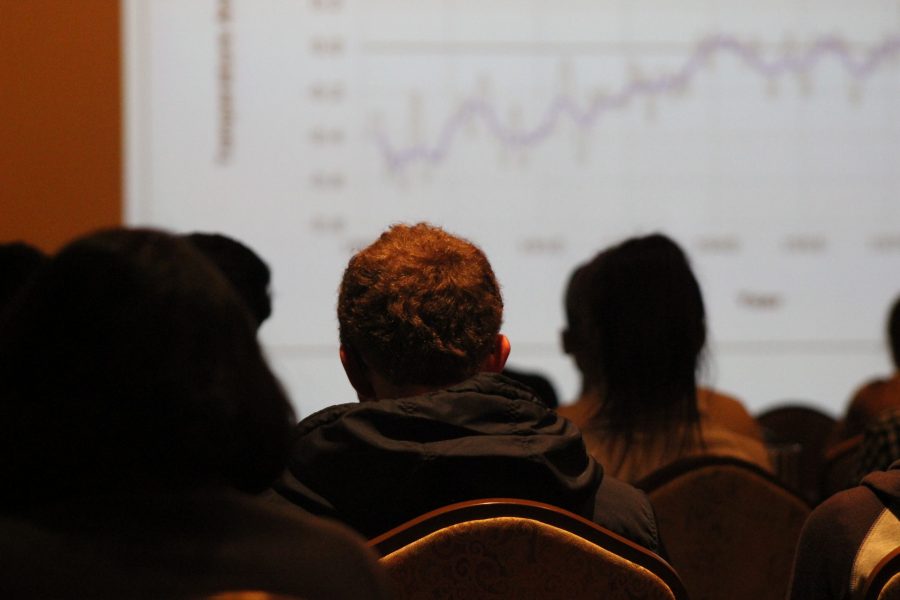 Photos by Benjamin Shirani/ The Paisano

On Wed. April 5, the UTSA Model United Nations Society (M.U.N.S) hosted a panel of experts to speak on climate change.
The panel consisted of four experts on fields related to climate change. According to Walker Adams, Senior Global Affairs Major and M.U.N.S. officer:

“Dr. Gomez is one of the pre-eminent experts in the San Antonio area and in the nation on sustainable energy. We targeted him initially and we were ecstatic when he joined the panel…As the head of the Texas Sustainable Energy Research Institute here at UTSA it was really important to get that engineering perspective.”
The entire panel consisted of Dr. Juan Gomez, interim director and research director of UTSA’s Texas Sustainable Energy Institute; Professor Raluca Owens, student development specialist with the department of political science and geography; Dr. Gwen Young, lecturer with UTSA’s environmental science program; and Dr. Matthias Hofferberth, assistant professor with the department of political science and the MUNS faculty organizer.

The speakers drilled into the issue of climate change, covering a variety of related topics. According to Dr. Gomez, nearly one in ten people on the planet lack access to safe water supplies and over half of the sovereign countries on the planet are projected to face at least some water scarcity by 2025. Dr. Gomez also said in January 2015, the World Economic Forum rated the water crisis the number one risk based on its potential to impact society.
Dr. Gomez was followed by Professor Raluca Owens. Owens described a class of migrants she called “environmental migrants.” In the context of her discussion, environmental migrants are migrants who are either forced to migrate due to climate change or migrate as a form of adaptation to climate change. According to Owens, current estimates project between 25 million and one billion environmental migrants by 2050.

According to Dr. Young, “the world is warming. The greenhouse effect has created a layer in the atmosphere that is keeping the heat in…No natural cause explains the current warming trend.”

Dr. Hofferberth noted the United Nations has been pursuing effective countermeasures to combat global climate change since 1972 when the United Nations hosted the “UN Conference on the Human Environment” in Stockholm. More recently, 143 of 196 countries have ratified a new agreement, otherwise known as the Paris Agreement, signed into effect in 2016. The Paris Agreement seeks to keep the effect of global warming this century to within 2 degrees celsius.

According to Adams, the society had been preparing the event for about a month and a half and attributed its success to the diversity of the panel experts:

“What got so many people here, why we filled up the Denman room with 150 plus people today, was because we had multidisciplinary experts who were willing to discuss with students and adults one on one.”

The society is responsible for hosting the Model United Nations Conference, which is a three day event each Fall, consisting of simulated United Nations proceedings.

The Model U.N. Society will host the conference next fall from Nov. 3 through Nov. 5. Next year’s conference will simulate the U.N. Security Council, ECOSOC and the U.N. Human Rights Council. The conference will focus on terrorism, climate change and gender equality.