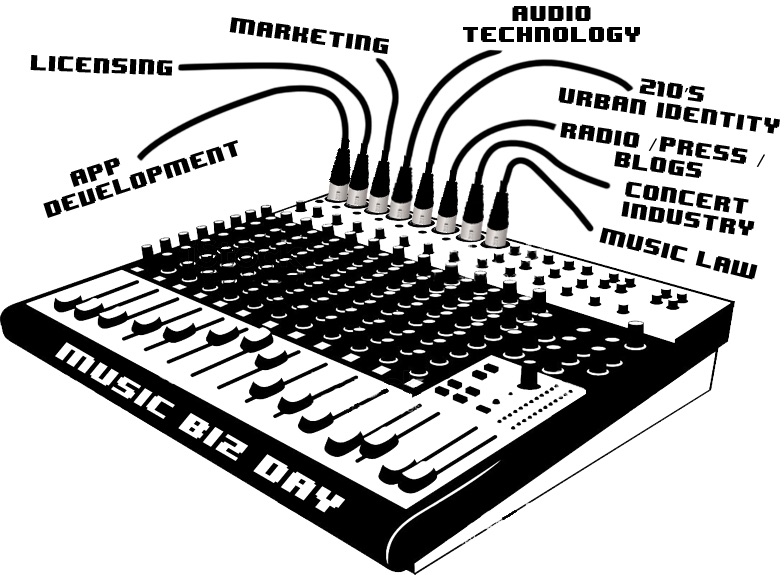 Graphic by Enrique Bonilla, The Paisano

Music in 2017 is an integral part to marketing, branding, the service industry, retail stores and is ever present in our day-to-day lives. How one song travels from the mind of an artist to the radio waves, blog sites and main stages at festivals is an interesting journey along a multifaceted market known as music business.

This Sat.,  Dr. Stan Renard—coordinator of UTSA’s music marketing program—will be your guide through the journeys involved in the music industry. Music Biz Day is the second music symposium hosted by French-born, Grammy nominated fiddler Renard.

“It’s not just for musicians, you know; it’s students who study communication, marketing or even computer science majors who want to build apps for the music industry. There will be students from all sorts of departments attending,” said Renard. In fact, MBD is the largest free music symposium conducted by a university in the United States, according to Renard. The all-day event takes place in the Arts Building.

MBD begins promptly at 8 a.m. with tacos, donuts and coffee provided in the Band Hall. Breakfast is followed by introduction speeches in the Recital Hall. Keynote speaker, Brendon Anthony, is director of the Texas Music Office, which acts as a liaison between government agencies and music businesses as well as provides networking and legal resources for Texas talent, events and music businesses. The first panel will be conducted in the same hall.

The 9 a.m. panel, moderated by Lisa Morales, VP of the Recording Academy (Texas Chapter) will cover singer/songwriters and showbiz. This panel is especially informative for those who write songs or jingles and are unsure what to do with what they’ve created or how to manage and profit from their craft. This panel will include Michael Morales of Studio M and Rockstar Academy; Julian Acosta, UTSA graduate and founder of Capitol City Records; and local R&B singer and UTSA graduate student AMEA.

San Antonio’s dream pop quintet, Sioux & Fox, will then perform during the first networking break. The intermittent networking breaks throughout the day are sponsored by San Antonio Sound Garden, a non-profit organization which strives to unite and ignite the city’s music infrastructure to help musical entrepreneurs on a variety of platforms network and to compete at the local and national level.

Capitol City Records creative director, Acosta, returns for the second panel in the Recital Hall along with fellow UTSA graduate, James Delgado of Triple 8 Management; Clifford Gilliard, co-founder of Capitol View Arts; and Dennis Johnson, “Untapped” radio show host. Reroute Music Group’s Bianca Neal will moderate the “My Music Career” panel, which attempts to provide a better grasp of a career in the music industry today, incubating artists before they can expand and provide a clear idea of the paths to attaining a sustainable career in the music business.

The second networking break will include a performance by Foreign Arm vocalist Nicholas Bleak, accompanied by Andrea Sanderson. The 20-minute networking breaks provide an opportunity to mingle with music brands and industry leaders.

Following this break, the panel topic will revolve around the radio, press, blogs and music in 2017. Conscious queer hip-hop artist and SA Current staff writer Chris Conde, along with KRTU’s Benjamin Gomez, KYSM’s Jacob Peierce and returning panelist Dennis Johnson, will discuss the promotion of music on the older mediums of mass communication, how bloggers generate revenue through music and the relevance of radio to music today. Puro Pinche’s Stephanie Guerra, a “digital hustler” as Renard remarked, will moderate this panel. This panel is followed by a 50-minute break for lunch and networking from 12:10-1 p.m.

The next session, 1-2:30 p.m. will include four panels in the Recital Hall and Choral Hall.

The first Recital Hall panel, moderated by Dr. Cory Halam of the Center of Innovation Technology & Entrepreneurship, will cover Music Technology and startups. Abe Batshon, CEO of beat licensing company Beatstars; James Cisneros of Mood Media Licensing, branding leaders in the music industry; and Daniel Rossen, GM of local event promotion site Do210.com comprise the panel. This panel will focus primarily on licensing and branding through music. The following Recital Hall panel will be particularly enjoyable for musicians. The Services for Musicians panel will offer information on legal services available to musicians and provide resources on maintaining productivity as a musician. GM of SA Strad Violin, Louis Gassner, Anthem School of Music’s Nathaniel Villareal, Executive Director of Texas Accountants and Lawyers for the Arts, Alissa McCain; and Erica Benavides of Don’t Forget The Music will be the guests for the Musician’s Services panel, moderated by Debbie Stanley of Thoughts In Order, an organization focused on helping people maintain organization throughout their life.

The first of the Choral Hall panels will discuss San Antonio’s urban music identity. As more and more music is moving to San Antonio and Austin loses its “weird,” San Antonio finds itself in the growing stages of a diverse musical identity with a booming market on the horizon, which depends on community cohesion. Panelists will include City Councilman Cris Medina, Blayne Tucker of Maverick Music Festival and the Mix, Adam Tutor of San Antonio Sound Garden and Libby Day of SATX Music. Day is intimately involved in the San Antonio music scene and will provide a wealth of knowledge for those unfamiliar with San Antonio’s music landscape.

Stephen Ray of the Texas Music Office will host this panel. The following Choral Hall panel will discuss a local favorite: tejano and norteño music. Carlos Alvarez of Azteca Records and Velia Gonzales of Why Not Entertainment will be moderated by two-time Latin Grammy winner, Michael Salgado.

The final networking break will conclude with psychology graduate student, AMEA, who brings a breath of life into the heart of R&B and soul music in San Antonio. For those of you unfamiliar with AMEA but familiar with SZA, Jorja Smith or Lauryn Hill, you are in for a treat.

The final panel will cover the concert industry. This panel consisting of huge industry names will cover everything related to the festival and concert industry.  Aaron Zimmerman, VP of programming and marketing for the Tobin Center; Mallory Hines, managing director of the SA Stock Show & Rodeo; returning panelist Libby Day who recently became the marketing manager of the Aztec Theatre; Whitney Bond of Triple 8 Management and Barry McKinney, head of Student Activities and Talent Buyer at UTSA. Theresa Jenkins, senior executive director of the Recording Academy Texas Chapter, will moderate the final panel, which will be followed with closing remarks by Renard.

Registration is still available through musicbizday.utsa.edu. Certificates of attendance will also be available for those who sign in at 8 a.m. and sign out at 3:30 p.m. More than 20 vendors, including the Aztec Theatre, Sam Ash Music Stores and South Town Vinyl will be present and looking for interns and employees.

“The idea is for folks to learn, to network, and folks who think ‘hey, I’m interested in the music business’ but don’t realize there are so many avenues in the music industry,” said Renard. MBD is for anyone with an interest in pursuing a career path in the realm of music.

A day filled with opportunity in a creative and growing industry for the price of 0 dollars: Music Biz Day.