The rise and fall of Aaron Hernandez 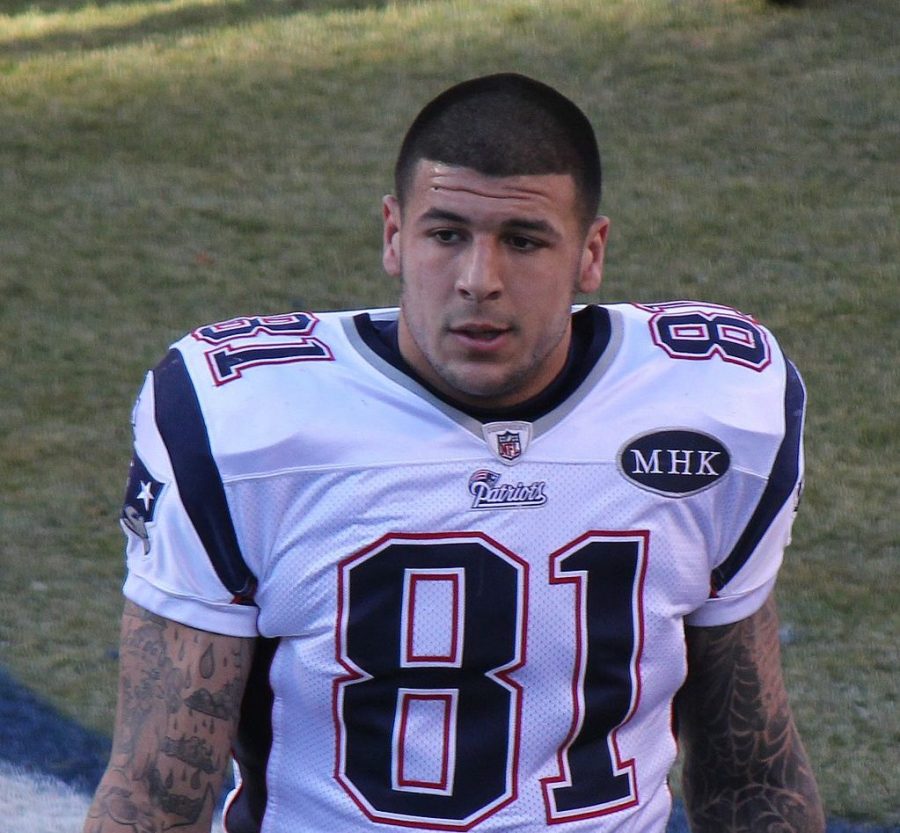 Former Patriots tight end Aaron Hernandez was found hanging by his bed sheet in his jail cell Wed., April 19. Guards at the Souza-Baranowski Correction Center and medical teams from UMass Leominster attempted to save his life, but Hernandez was declared dead an hour after he was found. It is reported that he had “John 3:16” written on his forehead, a popular Bible verse seen at sporting events, on drinking cups and shopping bags. The former NFL star was serving a life sentence for the murder of a man in 2013. Earlier in the week, Hernandez had been acquitted of a 2012 double murder charge.

Before he was in the spotlight for misconduct, Hernandez was a rising star in the NFL. Having won the Sugar Bowl with the University of Florida in 2010, Hernandez decided to skip his senior year and enter the NFL draft. He was picked up by the New England Patriots as a fourth-round pick despite his less than angelic record. He ended his final college season with a team high 68 receptions for 850 yards, five touchdowns and was the first Southeastern Conference player to win a Mackey award.

Coaches knew of Hernandez’s past, but the Patriots decided to take a gamble and draft the bright and knowledgeable player from Florida. Hernandez was nothing new to NFL staff who had experienced similar issues with other players before. Hernandez quickly became a star player because of his speed, passion and athleticism. A then 20-year-old Hernandez was the youngest player in the NFL during the 2010 season. His first two seasons with the Patriots ended with 124 receptions and 13 touchdowns.

In his best year, 2011, the 245-pound tight end played 14 games earning 79 receptions, 910 receiving yards and seven touchdowns. This season solidified his career with the Patriots who were happy they took a gamble on the player. Hernandez was offered a $40 million contract with a $12 million bonus at signing in 2012, despite having been accused of a double murder a few weeks before. Out of gratitude to the team, Hernandez donated $50,000 to a foundation honoring team owner Robert Kraft’s late wife.

Hernandez ended his three seasons with the Patriots with 175 total receptions, 1,956 total receiving yards and 18 touchdowns.

Was it possible that Hernandez was finally beginning to live a straight and narrow life, despite what he was accused of?

But the truth was, old habits are hard to shake and his career took a hit. In 2012, two men, Daniel de Abreu and Safiro Furtado, were shot to death in a drive-by- shooting. The main suspect—Hernandez. The NFL star was allegedly upset because one of the men spilled a drink on him in a club. However, prosecutors insisted the true killer was Alexander Bradly, an acquaintance of Hernandez and a key witness in the case. April 14, 2017, Hernandez was acquitted of seven out of eight charges against him. The jury found him guilty of illegal possession of a firearm.

In 2013, Hernandez’s career ended as the Patriots released him just hours after he was arrested for the murder of Odin Lloyd, the boyfriend of his fiancée’s sister. The subsequent year brought many indictments, including assault after an altercation with a jailmate, two counts of first-degree murder and other charges related to the same case.

In 2015, Hernandez was sentenced to life in prison without the possibility of parole for the murder of Lloyd. 2017 brought the tri- al for the killings of Abreu and Furtado for which Her- nandez was acquitted, but ultimately led to his death a few days later.

Despite his troubled past, Aaron Hernandez proved to be smart, passionate and able to perform like a star athlete. No doubt if he had continued, his potential would have unfolded for all the football community to see.