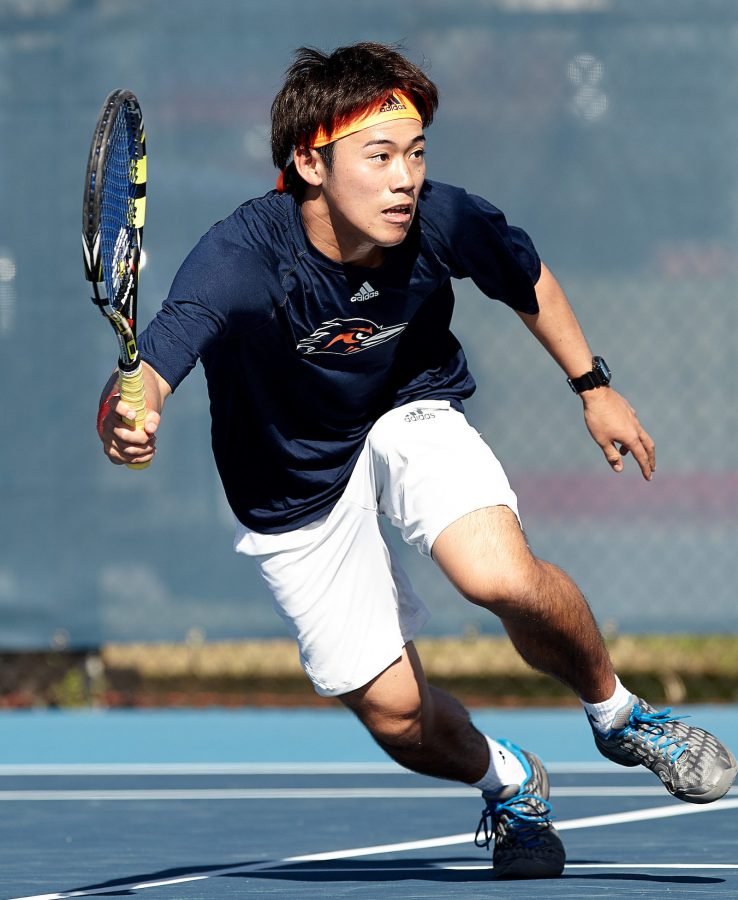 Takeru Watanbe chases down the shot. Photo by Jeff Huehn

This past weekend on April 21 both the UTSA men’s and women’s teams took part in the Conference-USA championship tournament. The women traveled to Denton, Texas while the men ventured all the way out to Murfreesboro, Tennessee to compete and try to end the season on the right foot.

Rice posted a 21-7 record throughout the regular season and entered the C-USA tournament as the top seed. The UTSA doubles team of Carillo and Reckow battled hard, but the 50th ranked duo of Bennett and Warren from Rice proved to be too much for them to handle and UTSA dropped their first match 6-4.

With Rice up 3-0, UTSA’s Igor Cantanheade took the lead in his singles match, but play was stopped after Rice’s Emmanuel Llamas secured Rice’s spot in the semifinals by winning a tight match against UTSA’s Gabriel Borunda with a (7- 6, 7-5) final.

With the four wins, there was no need to continue play as the Owls secured the victory over the ‘Runners. Play was suspended, and the Roadrunner’s season came to a rough halt.

Back in Denton, the women’s team drew a first-round matchup against the Southern Mississippi Golden Eagles. The Eagles had posted a 14-8 regular season record. On paper, it seemed as if the two teams would be evenly matched.

The Roadrunners jumped out to a quick 2-0 lead after the duo of Canudas and Kato won their doubles match over their opponents. However, Southern Miss battled back and won their next two singles matches to tie things up at two apiece. With the match deadlocked at two, UTSA’s Lina Hallgreen and Denisa Ibrahimovic each won their singles matches to end the Golden Eagles season and send the ‘Runners to the quarterfinals with a 4-2 victory.

Once in the quarterfinals, the women’s team was forced to take on a tough 37th ranked Rice team. Rice proved to be the better team and swept the UTSA women’s team in a 5-0 decision after Charleen Tiwari lost her singles match by a score of (2-6, 2-6) to finish the day. Canudas also suffered her first dual loss of the spring against Rice after com- ing out on the losing end of both her doubles and singles match. It was a tough way for the Spaniard to finish her college career, but it doesn’t take anything away from her success at UTSA.

Without Canudas next season, it’s tough to gauge how the women’s tennis team will perform come fall. We’ll just have to wait and see. As for the men’s team, hopefully they can improve their record when tennis returns in the fall of 2017.