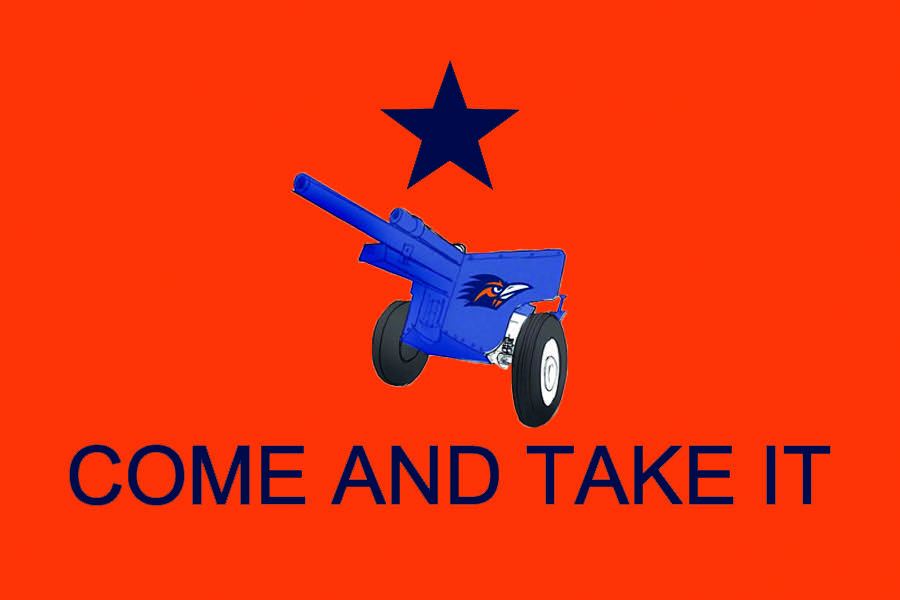 Student Government Business Affairs Chair Brett Davidoff and other SGA members are campaigning to raise $20,000 for a Rowdy Cannon. The cannon, a replica of full life-size artillery piece, would fire pyrotechnic shock charges after every touchdown and field goal during football games. It would also be used at other events such as Fiesta UTSA, Midnight Light and Graduation. According to Davidoff, a Rowdy Cannon is meant to honor San Antonio’s title as Military City, U.S.A. SGA plans for the UTSA ROTC cadets to operate the life-size cannon at events.

“This will truly improve the UTSA Rowdy brand by better crowd participation at our home football games,” said Davidoff in the campaign video.

The Roadrunners went 4-2 at home last football season. The home crowd played a key role in those four wins, so by adding a cannon to the atmosphere, the hope is that ‘Runners may be an even tougher opponent at home.

Thomas Avalos, political science junior, said, “The cannon would be great. As someone who goes to professional football games, there’s nothing more exhilarating than the loud ‘BOOM’ of a cannon as the crowd cheers for the home team.”

“Our goal is to bring a student-led tradition to life. The Rowdy Cannon will be a symbol of school pride for years to come,” stated Mikel Moore, sophomore SGA member.

UTSA is less than 50 years old and the football program is only in its seventh season. A relatively young university and football program in comparison to other large public universities in Texas like UT-Austin, Texas A&M and Texas State.

“I think the SGA’s use of $20,000 could be better spent elsewhere. UTSA has many traditions already and they’re already planned out by the university,” said Matthew Chandler, political science senior.

“I think the idea would be so awesome,” said Victoria Ramirez, English junior. “It would easily excite students and alum attending football games and give the crowd a stronger sense of school pride. Plus, this would be a neat tradition to start. It would be so cool to know that I had some input into a long-lasting tradition.”

According to a 2012 census, 48 NCAA Division I Football teams have cannon, including UT, Texas A&M and North Texas.

“I find the cannon frivolous,” Diana Davila, political science senior, said. “I wish we could create traditions of school spirit through helping out our student community not a cannon.”

“The money could be given to the UTSA Roadrunner Pantry for students who struggle with adequate food access,” Chandler said.

After a year and a half of preparation by gathering the proper parties, departments and organizations, SGA is asking everyone–students, staff, alumni, family and friends–to promote, fundraise and donate to this project.

The campaign has raised $4,380 from donations ranging from $20-$1,000. Everyone who donates $20 or more will be able to vote either blue, green, orange or gray as the color of the cannon. May 5 is the last day to donate.