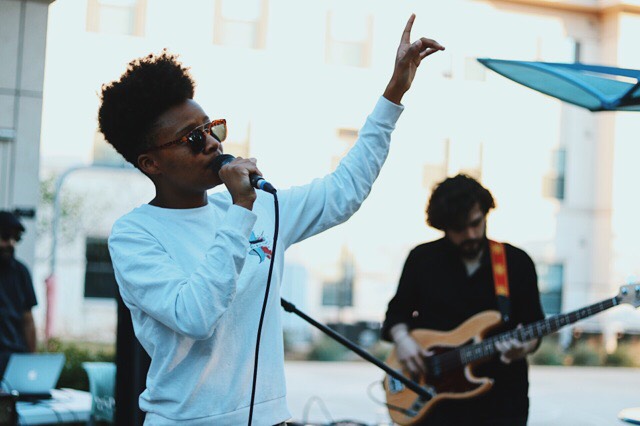 According to her heart break-inspired and softly spoken lyrics, AMEA is a “Resident of hypocrisy and adamant lust,” but on campus she is a sociology graduate student, panelist at  2017’s Music Biz Day and research assistant.

Oklahoma native Ayanna Moriah-Eliza Allen (a.k.a AMEA) has been stirring waves in the local and regional music scene for the past 11 months. Between performances in New York, a string of SXSW dates and her graduate studies, the 24-year-old artist is paying her dues in the music world and in the world of academia.

“I typically will do my school work as I work on my music; they go hand in hand to me, (or) I’ll get a song idea out quick before I need to get an assignment done on time,” Allen said. The boundaries of student and the stage moniker, AMEA, constantly blur due to traveling, studying, creating and performing. Constant movement seems to be the norm for Allen who was born in Oklahoma City, and later brought up in Ohio while spending part of her childhood in a travelling children’s choir.

Being raised on a diet of gospel in and out of church allowed a young Allen to absorb music consistently in a musician filled environment. Adolescence led to more variety as secular music became more prominent in high school for Allen. Her entire youth served as an incubation period leading up to 2015 when Allen released “In the Mind of AMEA Vol. 1,” a two-song project that showcases Allen’s extensive vocal range in a raw but full production.

After receiving overwhelming support from family and friends, Allen opened the floodgates and released several projects and collaborations this past year, including her latest single, “Sweet Talker” and the collaborative body of work,  “Colo(u)r Series.”

The sound of AMEA lies at the intersection of cool and serious, relaxation and tension and calm but fun. A silky smooth voice reminiscent of Jorja Smith or Gabi Wilson (a.k.a H.E.R.) shines over Miguel-inspired production that ranges from Nujabes’ redolent hip-hop to Kehlani’s brand of pop mixed with R&B. This diversity is all due to Allen’s belief in DIY ethics and desires for her music.

“It’s important to be self-sufficient as an artist. Being an active student of your craft is what being a self-sufficient artist means to me,” Allen said, “I want my music to be very broad so it can touch as many people as possible.”

On top of her diverse production value, the nomenclature in AMEA songs is especially stimulating whether she is rapping over the beat or crooning over a somber chord. This is no surprise considering American poet, writer and activist Nikki Giovanni is a huge influence on her art and ethics. Allen gathers inspiration for her life from Giovanni. “For me personally, that’s how I see my career going: being a professor and also being a musician. It’s very doable, and I’ve seen people do it,” she said.

Allen’s constant nose to grindstone ethos is continual and fierce. The box fade donning troubadour has one project in production right now, but she is working on it until it is as crisp and beautiful as she imagines it to release. Tour is also on the horizon for Allen’s summer, including dates in New York City, Atlanta and Los Angeles. Allen’s graduation date is set for December 2017. It is and will be a busy year for this new voice in San Antonio’s music scene.

To stay in touch with the world of AMEA visit her online at inspirelovedream.com and her Twitter and Instagram handle @MindofAMEA.