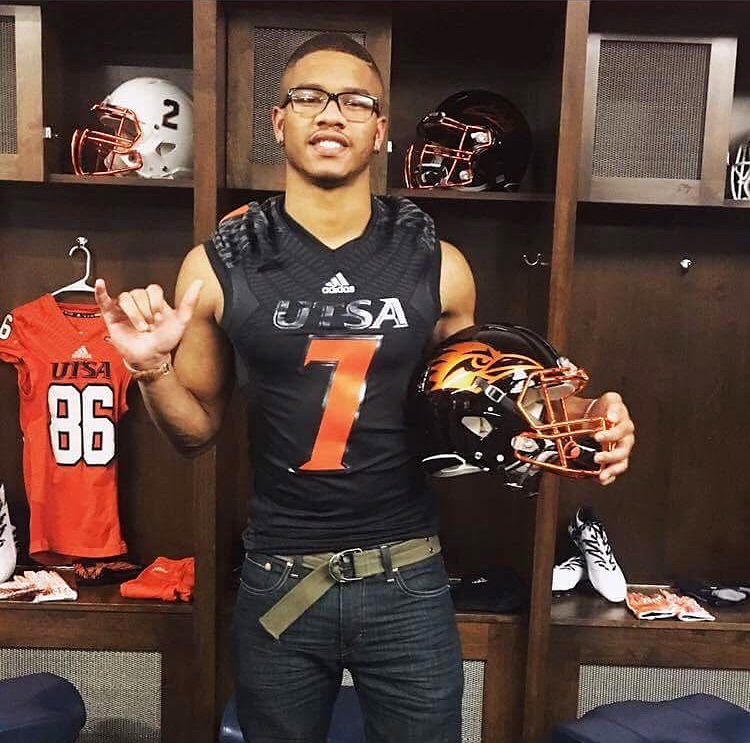 Harris poses for photograph in front of his new locker. Photo courtesy of Frank Harris

The UTSA football team was only founded in 2011. It is difficult to compete against more established football programs in the search for new players. This year the ‘Runners managed to sign two promising quarterbacks for the 2017-2018 season. One of those quarterbacks is Frank Harris; he comes from Samuel Clemens High School in Schertz which is 30 minutes from UTSA.

In 2015, Harris won the District 25-6A Offensive MVP as a junior. Harris received offers from 11 schools, including Rice, Georgia Tech and New Mexico. In the end, Harris decided to stay in San Antonio for a number of reasons, one of which was so his family could attend his games. Harris says it was his father and his older siblings that drew him into the sport to begin with. He grew up watching his two older siblings play and fell in love with the game.

Harris also wants to see UTSA’s football program grow around him; he believes in the future of UTSA.

Until recently, Clemens High School had not been known for its athletic program. Harris had been in the Judson attendance zone until the summer before his freshman year of high school when his family moved from Converse to Schertz.

Harris holds the school records for total yards, career passing yards and career touchdowns. He finished his junior season with 4,781 total yards of offense and 55 total touchdowns. He threw for 2,069 yards, 17 touchdowns and 38 scores. He was also an all-state football player. So there’s no question of whether or not he is a talented player.

As if by fate, it was in a 2016 game against Judson that Harris would tear his ACL. The injury occurred near the end of the season, forcing him to miss three more in-season games, as well as the entirety of the playoff season of his senior year. Harris described his hardest moment in football as “seeing my teammates not make it to playoffs. It was tough for me…because I’m blessed enough to go to the next level and play football again, but for some people that was their last game.”

Not tearing his ACL, but learning how to walk again was the most painful part of the injury, “I remember some days, I would cry at night, wishing I could walk.” Although such an injury could affect someone psychologically as well, Harris said he wasn’t worried about tearing his ACL again. He’s just excited to get back into the game and move at the fast pace of collegiate football.

Harris is not the only quarterback joining UTSA this 2017-2018 roster. UTSA also nabbed Bryce Rivers, another San Antonio native. Rivers graduated early from Stevens High School in order to join the ‘Runners for the Spring ’17 semester. Rivers participated in the seventh annual UTSA Football Fiesta Spring Game; an open practice held by the ‘Runners football organization in order to showcase the teams’ skills to the fans.

“On the field you can never underestimate anyone…I feel like all of the quarterbacks are competition to me,” Harris stated.

However, they’re ultimately working towards the same goal, the betterment of the UTSA organization as a whole.

Football and school come hand in hand to Harris; he’s there to play football, but it’s football that’s going to pay for his education. When it comes to balancing school, work and sports, Harris said, “I know it’s tough…but it’s something that my parents have always pushed me to do. As a student athlete, ‘student’ comes first.”

Harris enrolled in summer classes in order to begin practicing with the team this summer. He also tries to not get into the hype of becoming a ‘hometown hero’; he wants to stay humble and focus on playing football. “People will usually only see me mad on the field…but outside of that you’ll see me smiling and cracking jokes…I’m not somebody that wouldn’t talk to you, so if you wanna come talk to me, no matter where I’m at, I’d never ignore somebody,” Harris said.

UTSA gained a strong and driven quarterback when Harris joined the ‘Runner football roster. In the fall, there’s no doubt that the team will continue to improve.