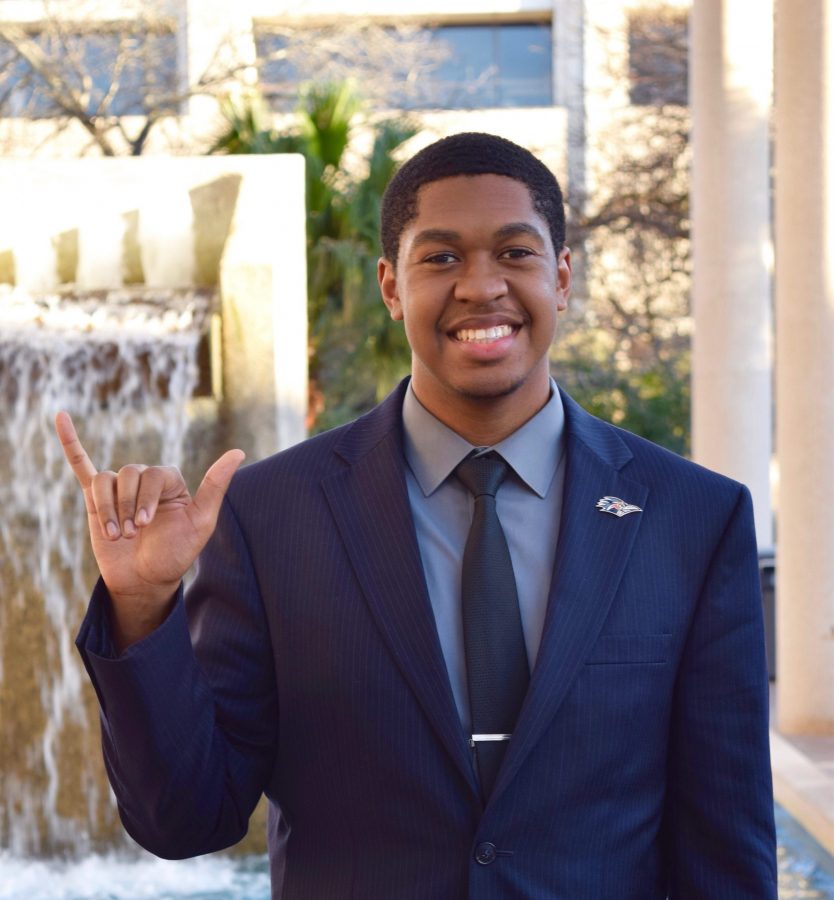 Student Government President Marcus Thomas stood confidently next to mayoral candidate Ron Nirenberg and UTSA interim President Pedro Reyes at the opening of the Kyle Seale Parkway. Thomas admitted this project was put in motion before he entered office, but he stood as a representative of the UTSA student body for the joyous occasion.

Thomas exuded an air of confidence and excitement, but his tone remained sincere when he spoke about his mission for the student body.

“I am here to advocate and represent the student body and their interests,” Thomas said.

Thomas defined his role as Student Government Association president as “represent(ing) the student body internally and externally. I will advocate on the behalf of the student body through local politics and sometimes even state politics.”

Thomas began his SGA involvement in the October of his freshman year. He viewed the organization as a means to get more involved in campus life and network with other like-minded students.

“I decided to go to a meeting, and it was a little scary and intimidating at first. I showed up in jeans and a T-shirt, while everyone else around me was dressed in business casual,” Thomas said.

“SGA is filled with may different members of all UTSA colleges. Having a sense of pride in the fact that we focus on research, not just in one college, but all over campus,” he said. “I started in business affairs and because of those who helped me I was able to work my way up.”

His former role as a peer mentor spurred his active campaigning for new students to join student organizations and take part in UTSA campus culture. He believes if students join one or more organizations at UTSA, they are more likely to succeed both in the campus community and after graduation.

Thomas wants to leave a legacy of school pride, focusing his efforts on making UTSA a first choice school.

“It really hurts to hear from students UTSA was their backup school. UTSA is not a backup school; it is a premiere institution, and one day we will reach tier-one. I want to make sure UTSA is a surprise for people, and it all starts at orientation.”

Thomas expressed optimism about the future of the university, but recognized current issues facing the student body, for example the adjustment to the College of Liberal and Fine Arts’ budget.

“The College of Liberal and Fine Arts will always be at the forefront of our minds. We need to make sure they have the resources they need. That also requires asking the question of ‘what can we shift around’ to make sure we don’t lose any resources,” he said.

“As an advocacy group, we really have to create an understanding that lets people know what SGA can do. If the students give more weight to the SGA, then we can give the students more weight in making their voice heard.”

Thomas continued to encourage student involvement, and noted Rowdylink as a resource for finding organizations a student can identify with. The SGA president is ready to give a warm welcome to all incoming students and will be attending orientation to promote the SGA.