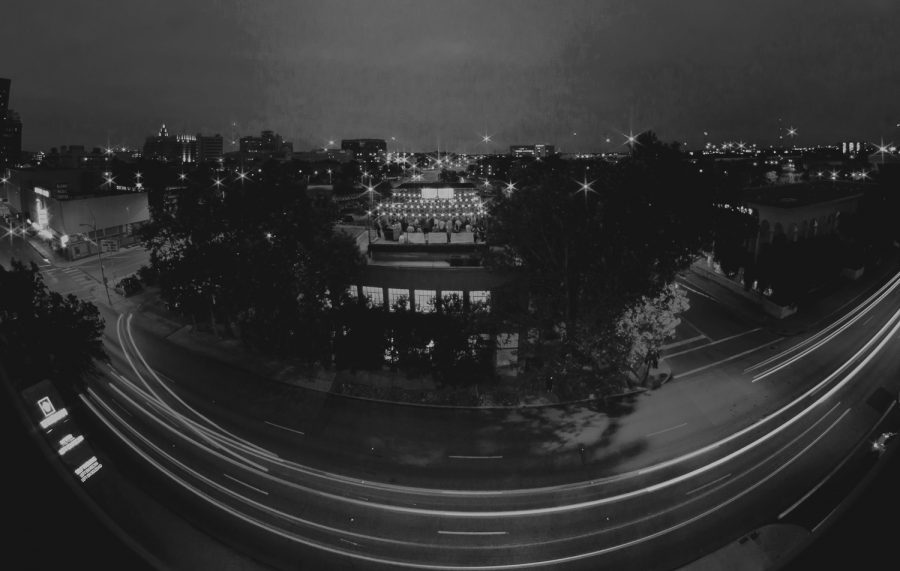 Rooftop Jazz from an aerial view. Photo courtesy of Artpace

Once a month, on the rooftop of Artpace in downtown San Antonio a crowd gathers for the Rooftop Jazz concert series hosted by Artpace and Trinity’s KRTU–a members only event–which continues deep into the fall semester.

On June 16, Latin style jazz music played from speakers to a crowd gathered atop the gallery until in the pink light of the setting sun the DJ finished spinning his final tune. Then there were only the sounds of the breeze and murmured conversations as the trio took to the stage.

For those who don’t know, San Antonio has a thriving local jazz scene.

From local giants like Jim Cullum and Doc Watkins to students studying here at UTSA, there’s a sizable all-ages crowd with an interest in making, listening to and dancing to jazz music. And as KRTU Music Director—and a jazz musician himself—Kory Cook can tell you, “it’s something San Antonio can be proud of. It’s certainly more of a genuine experience than in any other city in Texas, as far as I know, when it comes to Jazz.”

The trio began with their rendition of Ellis Marsalis’ Syndrome, a piece that begins quietly enough but builds into a quick swing that set the tone for what was to follow. The set list showed off the band’s range, including classically influenced pieces by Gershwin and Bernstein but also pieces by Art Blakey and the Jazz Messengers, the Yellow Jackets and the Oscar Peterson Trio.

The Doc Watkins Trio embodied everything great about live music and live jazz especially; their playing was organic and conversational, full of life. It was danceable, but still complex and interesting.

The best example of this came when midway through a swing tune Doc called out ‘double time’ and the band did just that, challenging musicians, dancers and a whole sea of bobbing heads.

There was, however, one expectation to which the concert did not live up; my expectation that it would be an especially elderly crowd. To be sure, it was an older crowd—as one might expect any ‘members only’ KRTU event to be—but there were a few college kids and plenty of people in their 30s.

For those interested in art, Artpace is free and open to the public Wednesday through Sunday from 12 p.m. to 5 p.m. The gallery features exhibits from artists-in-residence that include native Texans as well as artists from around the world.

The gallery is located at 445 N Main Ave and has free parking nearby.

The rooftop concerts occur monthly and will continue with Dr. Zog on Sept. 29 and then resume again next year when the winter’s over.

Though the event is membership only, student memberships can be had for only $25 at KRTU and $35 at Artpace annually.