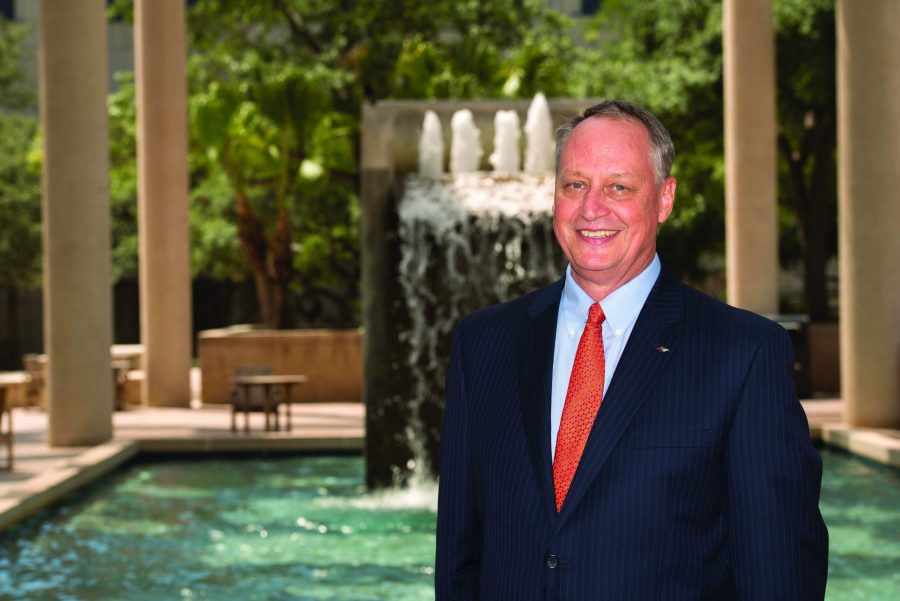 For months, the presidential search committee met silently to distinguish candidates from which to choose the next president of UTSA. After an arduous process, a loud thud came from the presidential search committee as it dropped the name of its sole finalist for the UTSA presidency. On June 30th, Dr. Taylor Eighmy was named the sole finalist by the UT Regents and July 25th he was approved in a majority vote by those regents.

In an interview with The Paisano, Eighmy emphasized that he wants students to know he is dedicated to University. When asked about what he wanted students to know about him, Eighmy responded with an enthusiastic message. He said, “I have great passion for the future of this place! Every student’s success is our success,” Eighmy then stressed the importance of the students in his mission of making UTSA a “Discovery Enterprise.” “I want to ask the students to help me work with this institution and this community to create the University of the future.”

“Discovery Enterprise” is a term he used to describe large research universities. Eighmy’s vision for UTSA focuses on capturing research opportunities and capitalizing on the different offerings a large metropolitan area, such as San Antonio, has to offer. Eighmy did not hesitate in stating his passion for creating “The Hispanic-serving institution of the future here.”

After he noted the virtue of UTSA’s demography, geopolitics and its status as a Hispanic serving institution, Eighmy described San Antonio as a champion for “learning, discovery and engagement.”

“There is going to be a big shakeup in public higher education. Education is expensive and states cannot afford to have many research universities,” he said.

“There will be a consolidation, mergers and acquisitions that happen, and, ‘smart money’ would say that public discovery enterprises will have to be closely connected with large metropolitan areas because of the density of opportunity.”

As the seventh largest city in the United States, San Antonio has a population of 1,144,646 people. Approximately 58 percent of the city’s population is Hispanic or Latino, making San Antonio a viable candidate for housing the number one hispanic serving institution nationally. According to a recent survey, San Antonio houses 117,546 businesses including corporate headquarters for giants such as USAA, Valero, HEB, Tesoro, Rackspace and the Southwest Research Institute.

Explosions in growth are evident in the biomedical and biotech sectors as well as in the rapidly expanding energy sector. Furthermore, San Antonio boasts an unemployment rate of 3.7 percent, well below the state average of 4.6 percent. Eighmy wants to capitalize on these qualities by providing a higher education institution equipped to satisfy these workforce requirements.

Eighmy was optimistic about his new beginning at UTSA. He hopes to begin a legacy with his family as they move from Tennessee. However he made a clear statement on his need of the campus community involvement in addressing his directives.