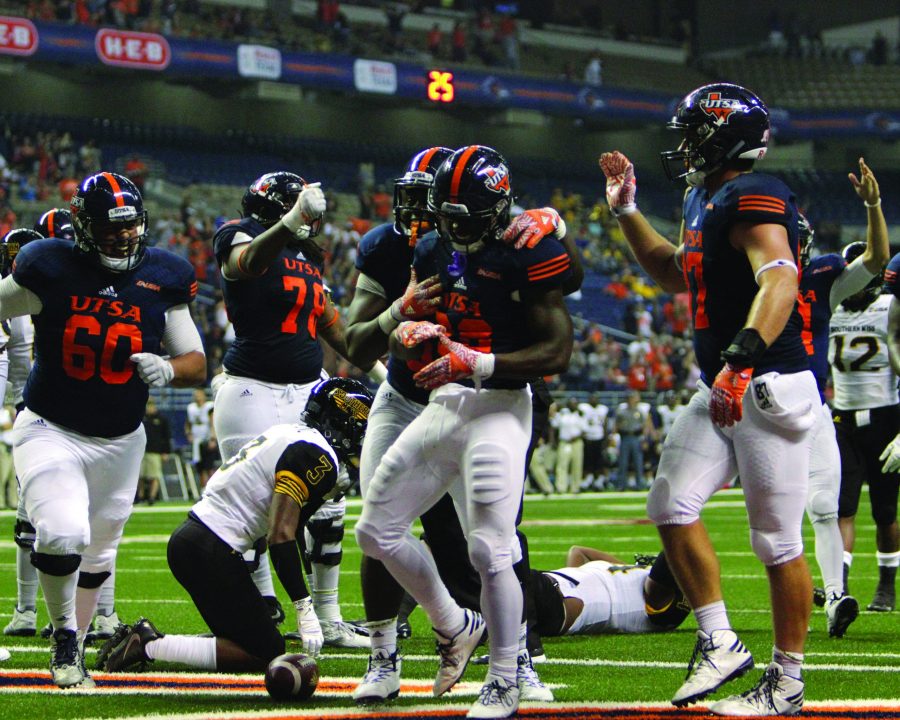 UTSA celebrates after scoring a touchdown on Southern Miss. David Guel, The Paisano

Louisiana Tech: 2016 record: 9-5 (6-2 C-USA)
Coming off a strong 2016 campaign, Louisiana Tech looks to follow up with another West Division crown. However, they will have to accomplish this with new quarterback J’Mar Smith. Smith started only one game last season, before handing the reigns over to senior Ryan Higgins. Because of this, the Bulldogs will rely heavily on senior running back Jarred Craft. During the 2016 campaign, Craft rushed for 1,074 yards and nine touchdowns.

On the defensive side of the ball, LA Tech is led by Jaylen Ferguson, who totaled an impressive 14.5 sacks, along with 49 total tackles, 16 of which were for a loss.

Overall, Louisiana Tech looks like the favorite to repeat as the Western Division champs in C-USA. If they can get solid play from Smith at quarterback, it will free up Craft to be explosive out of the backfield. This, paired with a stout defense, has to have Bulldog fans excited for football season this year.
UTSA: 2016 record: 6-7 (5-3 C-USA)

For the first time in the history of the program, the Roadrunners made a bowl game in 2016. Despite losing their inaugural bowl game, UTSA has a promising season to look forward to this fall.

On the offensive side of the ball, the Roadrunners have plenty of weapons to choose from. Dalton Sturm will be taking the snaps this season, coming off a 2016 season in which he completed 169 of 299 passes for a 56 percent completion rate, 2,170 yards and 20 touchdowns to six interceptions. Next to Sturm in the backfield will be backs Jarveon Williams and Jalen Rhodes, who rushed for a combined 1,727 yards and 17 touchdowns last season. The ‘Runners defense will be led by Josiah Tauaefa, who led the team with 115 total tackles. UTSA is a team to watch this year, and they are a dark horse pick to win the C-USA West Division over LA Tech.

Southern Miss 2016 record: 7-6 (4-4 C-USA)
Coming off a solid 2016 season, the Golden Eagles made yet another bowl game. They will be led by sophomore quarterback Keon Howard, who put up mediocre numbers in the limited playing time he saw. Howard completed 22 of 50 attempted passes, a 44 percent completion rate for 365 yards and threw one touchdown to four interceptions.

Howard will have two reliable weapons returning; running back Ito Smith and wide receiver Allenzae Staggers. Smith rushed for 1,459 yards and 17 touchdowns, while Staggers had 63 receptions for 1,165 yards and seven touchdowns.

Defensively, the Golden Eagles must replace six starters and will rely heavily on Picasso Nelson Jr. to be a vocal leader on the defense. Along with Nelson, Southern Miss. will count on Cornell Armstrong. The duo finished 2016 with a combined 95 tackles, and they will seek to anchor the defense. Southern Miss. is in a strong position to make another bowl game, but with a new quarterback and losing half of their starters on defense, it does not seem to be a year they will contend for the C-USA crown.
North Texas 2016 record: 5-8 (3-5 C-USA)
2016 was a poor season for North Texas, as they finished their season with a losing record. Despite this, the Mean Green has reason to be optimistic. They return 15 of 22 starters from last year’s team who will only be better than they were last year.

Offensively, they’ll be led by quarterbacks Mason Fine and Alec Morris, who threw for a combined 2,698 yards, 15 touchdowns and 12 interceptions.

Elsewhere, kicker Trevor Moore comes into the 2017 season having made 99 consecutive extra points.

North Texas may not contend for the C-USA title this year, but they will make definite improvements.
UTEP 2016 record: 4-8 (2-6 C-USA)
It is no secret that UTEP is not a football powerhouse and will more than likely not contend for a C-USA title in 2017. One of the lone bright spots will be quarterback Ryan Metz, who last season threw for 1,375 yards, 14 touchdowns and a 64.7 percent completion rate.

Keeping Metz safe will be offensive lineman Will Fernandez, who helped the offensive line give up only 22 sacks all season. On the defensive side of the ball, the Miners will rely on linebacker Alvin Jones, who finished the 2016 season with 93 tackles. Coming off their 2016 season, UTEP has nowhere to go but up, so Miner fans must remain optimistic for the 2017 season.
Rice 2016 record: 3-9 (2-6)
After a lackluster 2016 season, Rice will be looking to bounce back in 2017. However, the chance of Rice being a threat in C-USA is extremely low. They will be led on offense by a new face in quarterback Jackson Tyner, who saw limited playing time during the 2016 season and threw for 318 yards and a 48 percent completion rate.

One of the lone bright spots for Rice this upcoming season may be their defense, that return with eight starters. Amongst those returning is Emmanuel Ellerbee, who led the team with 118 total tackles. Nonetheless, Rice is likely to finish last in the West Division once again and is still years away from being a legitimate contender. 2017 Conference-USA football preview UTSA celebrates after scoring a touchdown on Southern Miss.