This week on stage: Vol II 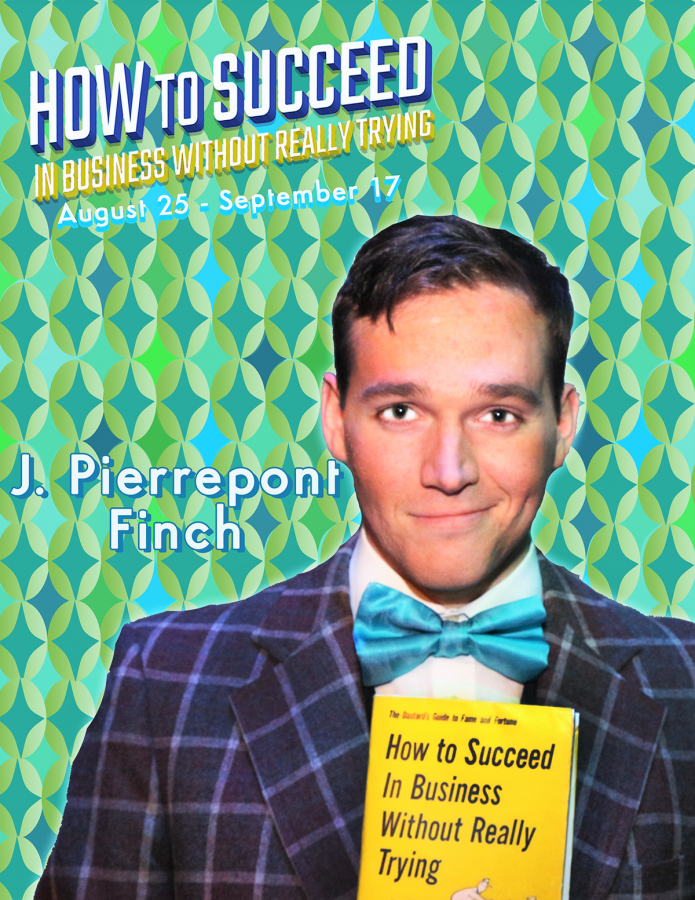 Photos courtesy of the Woodlawn Theatre.

For just $20, you, dear student, can learn to manipulate your way to the top as the Pulitzer-winning musical “How to Succeed in Business Without Really Trying” busts onto the Woodlawn Theatre mainstage from Aug. 25 to Sept. 17.

But Finch, a former window-washer, has an ace up his sleeve.

Unlike Frump, Finch’s ambition is tempered by the wise if cynical advice of his eponymous guidebook, “How to Succeed in Business Without Really Trying.”

But apart from its spectacle, this critic recommends “How to Succeed” as a way to meditate on how American civic culture has devolved into what was considered absurd in 1961.

I quote from the play’s final moments:

FINCH: Rosemary, I’ve got a big decision to make. They want to make me chairman of the board. What do you think?

ROSEMARY: Darling, I don’t care if you work in the mailroom or you’re chairman of the board or you’re president of the United States, I love you.

BIGGLEY: Miss Jones… take a wire to the White House: “Watch out!”

From the perspective of 2017, the rise to power of a manipulative businessman to public office is no longer absurd.

Evidenced by the rise of Donald Trump to leader of the free world last November, what was laughable in 1961 has today become a painful reality.

“(Today) the jokes have a different meaning than they did in 1961,” said Rodriguez.

“And I think a lot of people will connect to that more because of Trump, because of the way he has risen from reality star to now president of the United States.”

Rodriguez, a graduate of San Antonio’s North East School of the Arts, took over as executive and artistic director of the Woodlawn Theatre in 2012.

Indeed, Rodriguez’s boot-strap biography parallels the drama his cast and crew have brought to the stage.

“I started working in a box office volunteering, and started here (at the Woodlawn) in the kid’s program, and now I’m in charge of the company,” said Rodriguez.

“Ultimately I feel like (the play) is about the American Dream. You start with nothing but you can become something,” Rodriguez continued.

“How you do that, whether you are more of a Trump way or Finch way or Chris Rodriguez way, it just depends on what path you choose.”

But for this critic, understanding “How to Succeed” as the can-do, American-made fairytale it purports to be means falling into the same trap that we as a nation fell into last November.

Last November, Donald Trump convinced millions of Americans that he was just like them—that he was a fallible outsider, an underdog chasing a dream.

But Trump is like the rest of us in one very important way.

He is chasing a dream of success in anything, no matter the cost.

The uncanny parallels between the fictional ascendancy of a character like J. Pierrepont Finch and the real-life ascendancy of a man like Donald J. Trump faces Americans with the grim possibility that things are going according to plan.

Or, in the words of Finch, the protagonist himself:

“You see, Wally, even though we’re all part of the cold corporate setup … deep down under our skins there is flesh and blood. We’re all brothers.”

So maybe corporations are people after all.

But I think not.

Rather than affirming notions of the American dream, “How to Succeed” confronts audiences with an opposite, even un-American moral.

By refusing us a proper feel-good, rags-to-riches hero, “How to Succeed” challenges Americans to stand against the cultural crisis it predicted 50 years ago in the fictional presidency of a corporate man like Finch.

Simply put, go see “How to Succeed in Business Without Really Trying” because it challenges us to worry less about success and more about what it means to succeed.