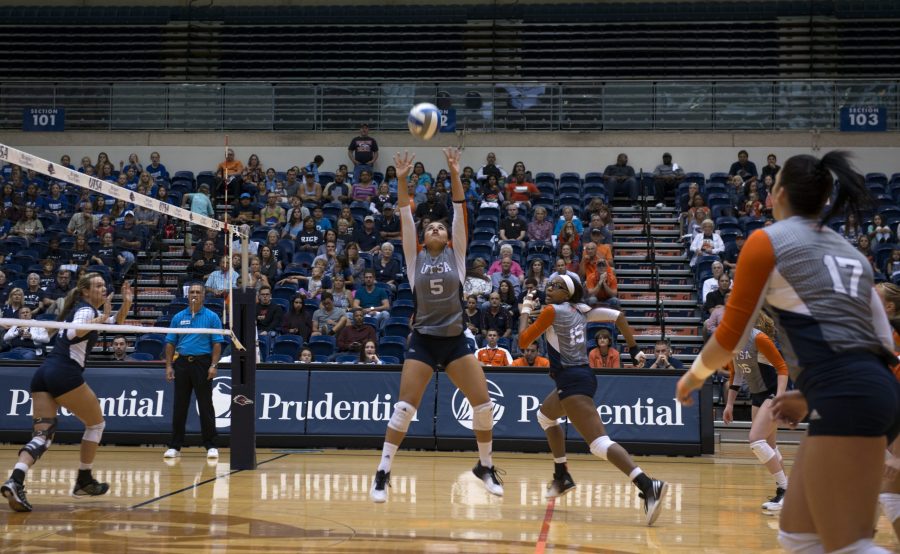 Amanda Gonzalez sets up one of her teammates. Ethan Pham, The Paisano

Winning is a habit for head coach Laura Neugebauer-Groff.

The Roadrunners have been a volleyball powerhouse since entering Conference-USA in 2013, and they will look to repeat their 2013 championship season this year. Neugebauer-Groff has led her teams to 20 wins in every season since 2013 but may be facing her toughest challenge yet.

UTSA has two seniors going into their 2017 season after losing four seniors from last year’s team.

Senior Marijeta Runjic was named to the 2017 Conference USA volleyball preseason team and will look to lead this team in kills. The second senior is no slouch either; Megan Slan will secure the middle for UTSA and attempt to climb UTSA’s all-time block assist leaderboard. Slan currently sits at eighth best in program history with 105 block assists.

While the seniors lead, the predominantly underclassmen team will look towards their sophomores and freshmen to step up.

Freshman Hannah Froeschl could play a large role this season for the Roadrunners. In their game against Coastal Carolina, Froeschl added 12 kills to their team total.

The UTSA offensive three-headed monster is rounded out with Sophomore Brianna McCulloch. The San Antonio native currently sits at 22 kills, making her second in kills through the first two games.

Runjic will be the focus of UTSA’s offensive game plan, but we all know the saying about defense and championships. UTSA’s young team must play stellar defense to compete for a championship this season. Sophomore Emily Ramirez has been the defensive star thus far, leading the team in digs in both contests. Not far behind and flying under the radar is junior Shelby Williams.

The team began their 2017 campaign with two defeats at the hands of Costal Carolina and TCU. Their strength of schedule has increased in difficulty in the past years. They will travel to three more tournaments before their conference schedule begins. These opponents include: Minnesota, Tennessee, West Virginia, SMU, Baylor and their I-35 rivals, Texas State.

These tournaments will serve as excellent measuring stick games for Neugebauer-Groff and her team as they have been tabbed to finish third in the preseason conference standing polls.

The Roadrunners have a lot of potential in their young team and senior leadership, but there are a lot of unknowns with this team. We won’t know how good this team is until they face their first true conference road test. All of the team’s underclassmen have to rise to the occasion and help both seniors to yet another 20 win season and tournament run.

Realistically, their season could go in two extremely different ways. If their inexperience shows, then the team’s 20-win season streak could be in danger. However, if their youth develops into the next wave of stars for Neugebauer-Groff and their star outside hitter Runjic continues to dominate, they could win the regular season, the conference tournament and claim their first NCAA tournament berth since 2013.