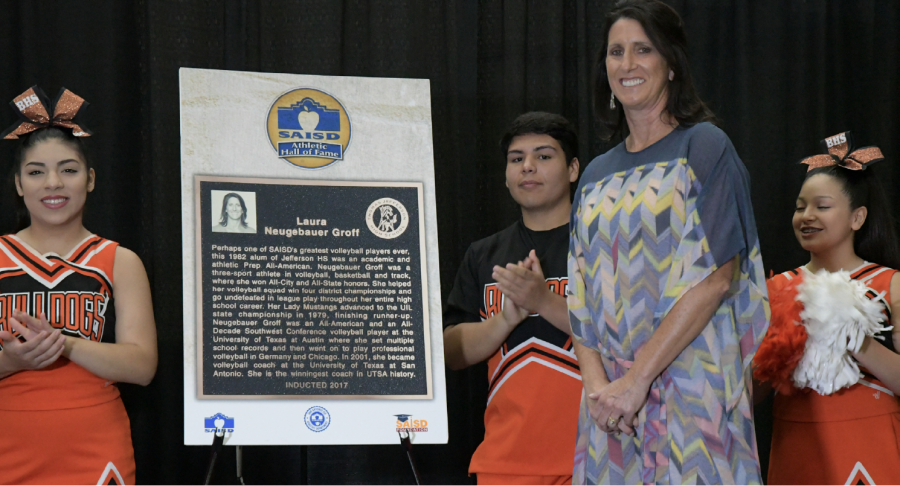 Groff poses for a photo next to her hall of fame plaque. Photo Courtesy of SAISD communications department.

UTSA Head Volleyball Coach Laura Neugebauer-Groff was inducted at the SAISD Hall of Fame on Saturday evening at the Alamo Convocation Center. “Words can’t describe. If anybody knows the history of SAISD and all the great athletes, men and women that have gone through the programs all of the SAISD schools and to know that I am one of those? It’s just such an honor and a privilege to be on this stage with all of these men and women,” Neugebauer-Groff said on her induction the SAISD Hall of Fame.

Neugebauer-Groff, a graduate from the 1982 class, played for Jefferson for all four years of her high school career.  Neugebauer-Groff led her team to four district championship titles, and she was undefeated throughout her entire high school career. She was a three-sport athlete involved in basketball and track. There, she was able to win All-City and All-State Honors.

“Playing in the State Championship game and playing with my sister was my probably my fondest memory from high school,” said Coach Groff. “My sister was a year older than me and we played volleyball, basketball and ran track together.”

She was named Prep All-American and Academic team by the National High School Association.  During her freshman year in 1979, the Lady Mustangs advanced to the UIL Volleyball State Championship finishing runner-up. She is considered to be the best volleyball player to come out of SAIS.

After high school, she went to UT Austin and became an All-American volleyball player where she set various school records. She then went on to play professional volleyball in Germany and Chicago.

“I got to play with my sister, and playing in one of the best universities in the country speaks for itself. It’s just a great program. We were able to always rank in the Top 10 and just to be able to say that I’ve played University of Texas Volleyball is an honor in itself,”  Neugebauer-Groff said of her career at UT Austin.

In her coaching career, she’s won over 500 games, making her the winningest coach in UTSA volleyball history.

“I keep getting good athletes, we’re only as good as our athletes, so I’ve been fortunate enough to have girls trusting me and wanting to come play for me to keep the tradition going,” said Groff about her winning tradition.

As to what Neugebauer-Groff enjoys about coaching, “ Everything. There’s been so many ups and downs, the athletes that I’ve had come through and UTSA Administration that I’ve worked with. I can’t really pinpoint one thing, I’d have to put it all together.”

Neugebauer-Groff’s transition from a volleyball player to a volleyball coach has been a rewarding journey for her.

“I made that change when I graduated from college and played three years of professional volleyball. I started coaching onto high school, and I think the hardest thing to understand is that you have to bring yourself down to their level. You play at such a high level, you just have to understand that it’s all about teaching, so it really doesn’t matter the level. It’s just about teaching and being patient for them to get where you are.”

“The growth. The growth of our school and the challenge of young ladies still wanting to go to some of the bigger schools, better known schools, but little do they know, we are one of those bigger schools now. It’s just the education part of it that we need to do a better job on as we keep growing to educate the communities in the state of Texas how good we are.”