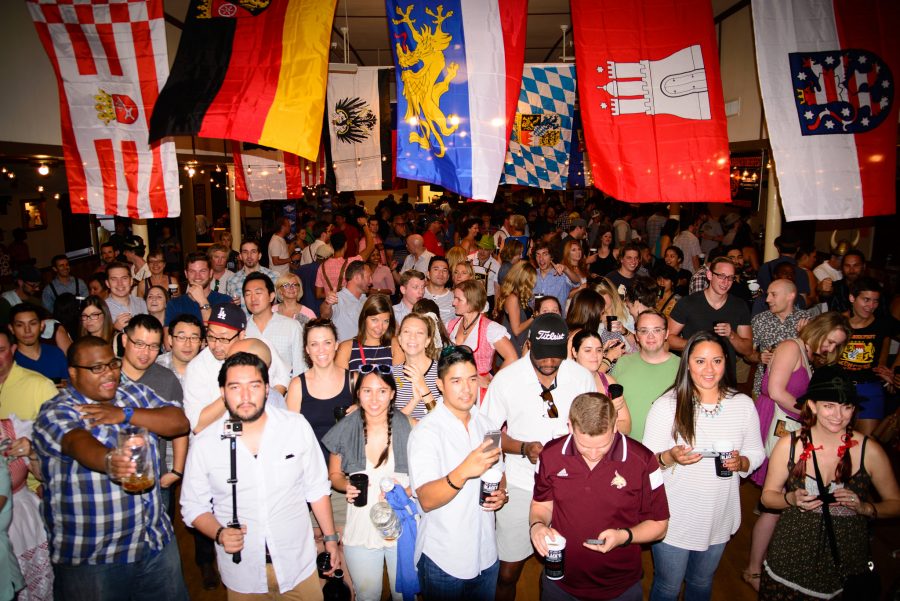 As autumn leaves descend, Oktoberfest descends on San Antonio and the surrounding areas.

Oktoberfest is a world-wide celebration of German heritage and the arrival of the fall season. Held annually in Munich–the capital of the German state of Bavaria–Oktoberfest is the world’s largest Volksfest (People’s Fair).

The original Oktoberfest occurred in Munich on Oct. 18, 1810. The festival was held in honor of the marriage between Prince Ludwig and Princess Therese of Saxe-Hildburghausen. The event is now a 16 to 18 day celebration, which begins in mid to late September and ends the first weekend in October.

The beer selection is the highlight of the festival. The presence of beer tents is a tradition at Oktoberfest and each beer tent is sponsored by one of the six main breweries in Munich–Augustiner-Bräu, Hacker-Pschorr-Bräu, Löwenbräu, Paulaner, Spatenbräu and Staatliches Hofbräu-München. Within the tents, traditional Bavarian food and beer specially brewed for the Oktoberfest season are served, along with musical entertainment–usually of tuba and drum Polka variety.

Oktoberfest is a popular and appealing part of Bavarian culture. By the mid-1900s, the festival had turned into an enormous world-famous festival that was replicated worldwide.

Of course Texas, with its long German history and influence, had to participate in the beer-drinking merriments, so several cities have their own region wide Oktoberfest.

The more traditional Oktoberfest occurs within the German heritage city of Fredericksburg which is only a short drive away to the north.

The family friendly festival has events and activities for everyone from the young Kinder to the experienced Biertrinker.

Oktoberfest attendees can participate or observe the OkTubafest where tubas line the streets of Fredericksburg in Polka unison.

There will be competitions of Texas 42, also known as the “national game of Texas,” for domino lovers, and obstacle courses for children as well as an 8k run and 5k walk, which will be held to sponsor literacy programs in Fredericksburg.

Along with great beer, each site will have a variety of German, American and Cajun food. Fredericksburg’s Oktoberfest serves authentic Munich Oktoberfest style beer–Hacker-Pschorr-Oktoberfest, Paulaner Oktoberfest and Spaten Oktoberfest–beers that are characterized as a copper-red Bavarian Märzen with full-bodied maltiness with a slight spice and dry finish. Other offerings will include domestic and Texas brews including a selection from Celis Brewery, Karbach Brewing Co., Altstadt Brewery and ZiegenBock Brewing Co.

After a round of beer, several bands including The Seven Dutchmen, Red Ravens and The Polkamatics will be playing throughout each event day to keep you dancing the Schuhplattler, Germany’s traditional folk dance.

Within San Antonio’s city limits, Beethoven Maennerchor, located in the King William’s district will be providing Oktoberfest for locals. Founded in 1857 to foster German culture and language, Beethoven Maennerchor is San Antonio’s oldest and most popular traditional biergarten serving traditional German beer and dance. This year’s festivities will land on October 6, 7, 13 and 14 and will include German choirs, polka bands, German food and, of course, Oktoberfest beers on tap.

Alamo Beer Company will also be hosting their third Annual Oktoberfest from Sept. 29 to Oct. 1. The event takes place at the company’s Beer Hall & Garden and is free to attend. Each night, a special and limited Stammtisch–a German-style family meal created by Braumeister James Hudec & executed by chef Edward Garcia III of The Box Street Social–will be held. The dinner includes a commemorative Oktoberfest mug and either two full pours or four half pours of your choice of beer. Alamo Beer Company will also be brewing their own Oktoberfest style beer.

Beer barrel polka, juicy bratwursts and Bavarian brews all merge together to create Oktoberfest for San Antonio and the surrounding areas so grab your lederhosen and make your way to your nearest biergarten this October. Prost!