Athlete of the week: Julie Houston 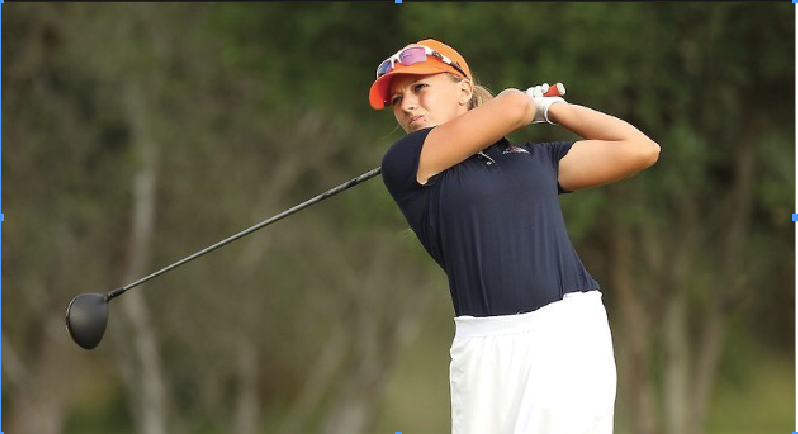 Houston follows through on her drive. Photo courtesy of Jeff Huehn/UTSA Athletics

Julie Houston began dominating the golf course at only twelve years old. Her love for golf grew as the years passed. The UTSA junior has now played golf for eight consecutive years, and she doesn’t plan on stopping anytime soon.

The athlete is determined on and off the course. She is majoring in marketing and has big dreams of becoming a professional golfer. Houston plans on using her aquired marketing knowledge to gain sponsorships and create relationships with people who can help get her into tournaments.

Houston had plenty of options to choose from when it was time to apply to universities. UTSA held the biggest appeal for Houston because of the location and weather.

“It’s not too far away from home, and the weather down here is perfect for golf; we can play outside all year round.” Houston’s second choice school was further up north, and the golfer wouldn’t have enjoyed competing in the snow.

While being a part of the UTSA women’s golf team, she found an excellent support system and has made many wonderful friends along the way.

“The coaches and the girls on the team are so awesome,” Houston said. “The whole support system for our team is great.”

Houston has enjoyed many wonderful experiences while golfing for UTSA. The women’s golfing team has traveled to Mexico, Utah, Florida and Colorado. “It brings so many great opportunities for my future,” Houston said. “I’ve met some really nice people along the way.”

Houston grew up in Alan, Texas with her two parents and four older siblings.

“It sometimes feels like I have six parents,” Houston laughed. “We’re all really close and they’re just so supportive of my golf.”

Houston owes a lot of her success to her parents. No matter where or when her tournaments were, the golfer’s parents traveled to nearly every tournament their daughter participated in.

“They have invested so much into my games; I’ve come so far because of them.”

Golf has played a massive role in Houston’s life. Nothing compares to the feeling she gets while playing the sport. The golfer plans on staying in the industry for the rest of her life.

“It has really changed the path that my life is going,” Houston said. “Even though it consumes all of my time, I love it.”