Roadrunners defeat Bobcats in I-35 showdown 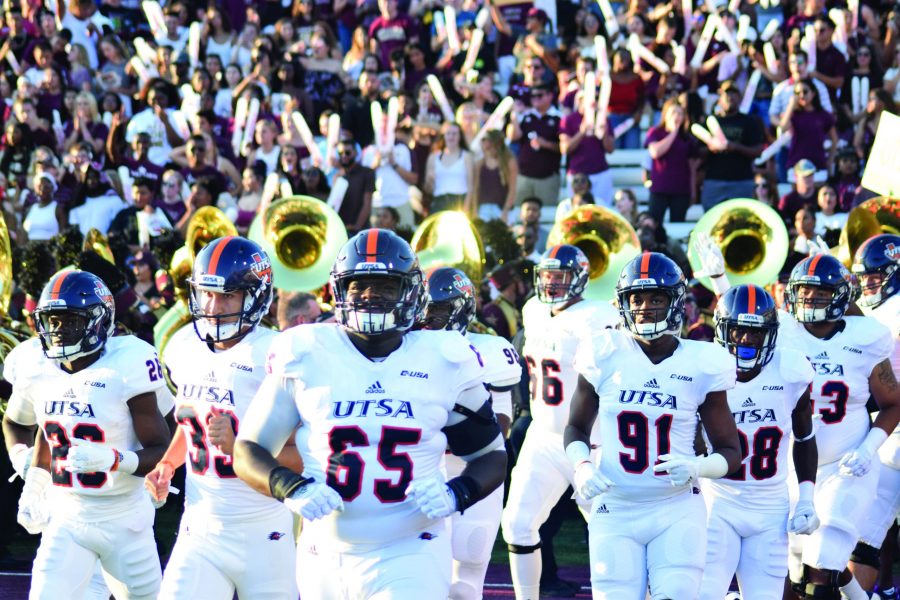 UTSA runs out onto the field at Bobcat Stadium in front of over 30,000 fans. Ricky Galindo, The Paisano

It had been five years since the Roadrunners and Bobcats last squared off on the football field, and the anticipation level was through the roof heading into Saturday’s contest at Bobcat Stadium. In 2012, UTSA won their first and only football game against Texas State by a score of 38-31. This time around, the ‘Runners wouldn’t be in the friendly confines of the Alamodome; they were in Bobcat territory.

UTSA ran out of the tunnel onto the field and were immediately met by boos from a sea of maroon and gold. Although many UTSA fans made the trek up to San Marcos for the game, Bobcat fans made it clear early on that this was their house. The trash talk from both schools had built hype, and 31,333 fans showed up to watch the I-35 showdown. It was the fourth highest attendance in Bobcat Stadium history.

The first quarter produced fireworks. On their first drive, UTSA moved the ball with ease and quickly advanced into the red-zone after a pass from Dalton Sturm to Jalen Rhodes moved the ball inside the 10 yard-line. However, the Texas State defense stiffened and stopped the UTSA offense on a third and goal to force a 21-yard field goal attempt by kicker Jared Sackett. Sackett made good on his opportunity and put the ball through the uprights to give UTSA an early 3-0 lead.

The Roadrunner defense has been dominant so far this season, and it showed on Texas State’s first offensive possession. After a mishandled snap, defensive end Eric Banks put a solid hit on Texas State quarterback Damian Williams and forced a fumble. The loose ball was picked up by linebacker Josiah Tauaefa, and he took it into the end zone for a defensive touchdown. With the first quarter barely underway, UTSA had taken a 10-0 lead over the Bobcats.

Once the Bobcat offense got the ball back, they would bounce back and quickly answer UTSA’s score. After being pinned against the Bobcat’s end zone, Williams broke off a big 30-yard gain to get the offense moving. After a 26-yard pass and a use of hands to the face penalty on UTSA, the Bobcats found themselves within striking distance. Williams kept it and found the end zone on a quarterback keeper to cap off the 94-yard drive. The touchdown cut UTSA’s lead to just three with the score now 10-7.

UTSA began the second quarter with the ball on their own 1 yard line following a 74 yard punt by Texas State’s Marcus Ripley. After some nice footwork by running back Tyrell Clay earned the offense some breathing room, Sturm scrambled out of the pocket and broke off a big 65-yard gain. Unfortunately, the play was called back on a holding penalty and was erased. But despite the penalty, UTSA would score just two plays later on a 67-yard touchdown run by Jalen Rhodes to give the Roadrunners a 17-7 lead early in the second quarter.

Shortly after, the Bobcats would answer yet again. After stopping Texas State on third down, Marcus Davenport of UTSA was flagged for illegal participation after he continued to play once his helmet had been knocked off by the Bobcats. The penalty resulted in a big first down for the Bobcats. Later that drive, UTSA corner Devron Davis was flagged for pass interference, giving the Bobcats the ball inside the 10. Texas State capitalized on UTSA’s penalties and scored on a nine-yard pass play to make the score 17-14 midway through the second quarter.

The Roadrunner offense would quiet the Texas State crowd on their very next drive though. UTSA drove the ball down the field by relying on the running game as Tyrell Clay wore down the Bobcat’s defensive front. After a pass interference penalty on Texas State, UTSA found themselves inside the 10-yard line. A give to Clay was all it took to make the score 24-14 as Clay took the ball up the middle for an eight-yard score.

After a defensive stop, the UTSA offense took over with the time winding down in the first half. Sturm hit receiver Brady Jones on back to back deep passes to set up Sackett with a field goal attempt. Sackett drilled the 43-yard field goal as time expired in the first half and with that, UTSA took a 27-14 lead into halftime.

Texas State got the ball to begin the second half, and it was evident both defenses had made some adjustments at halftime. Midway through the third quarter, UTSA drove the ball into the red-zone, but the Bobcat defense stepped up and forced a field goal attempt after stopping Sturm’s third down scramble. Sackett’s attempt was good once again, and UTSA pushed the lead to 30-14.

Sackett’s field goal proved to be the only three points of the third quarter as both defenses tightened up. UTSA fans proudly waved around their orange “Come and take it” flags as the third quarter buzzer sounded throughout the stadium. The fourth quarter was set to get underway with the ‘Runners up by 16 points.

Early in the fourth quarter, Sturm broke off a huge quarterback run up the middle to get the Roadrunners into Bobcat territory. Shortly after, Jalen Rhodes found some room to the outside on a 36-yard rush and dove into the corner of the end zone for his second touchdown of the game. His touchdown made the score 37-17, and Bobcat fans began to head for the exits.

With only three minutes left in the game, Head Coach Frank Wilson put in some of his reserves, including quarterback Bryce Rivers and running back Brett Winnegan. Winnegan would only get the ball one time, but that was all he needed. Winnegan took his sole handoff up the middle and broke a couple of tackles en-route to a 71-yard touchdown run to make the score 44-14.

After another defensive stop by UTSA, the Roadrunner offense came out to kneel the ball and run out the clock. The final horn sounded, and UTSA was handed the new “HEB I-35 showdown” trophy on the field as the Bobcats walked off the field. UTSA has officially moved to 3-0 on the season, and they have done it in a big way.

The UTSA offense had their way running the football all night long, and they put up a school record for single game rushing yards with 357. Running back Jalen Rhodes had a career best 174 yards on the ground while Tyrell Clay added 72 yards of his own on 13 carries.

“Jalen competed well, and he ran the ball well between the tackles,” said Wilson on Rhodes’ performance.

Although Sturm didn’t throw for a touchdown in the win, his solid play continued as he went 17-25 passing for 212 yards and no interceptions.

The Roadrunner defense held Texas State to only 198 yards of total offense but had problems with penalties throughout the game.

“We cannot continue to be plagued with penalties and be a really good football team, we have to clean up those things,” said Wilson. Despite having won by 30, UTSA gave up 155 yards of penalties.

Nonetheless, UTSA football is unbeaten this season as they head into the bye week. Their next contest will be at the Alamodome on Oct. 7 against Southern Miss.