Athlete of the week: Nate Gaines 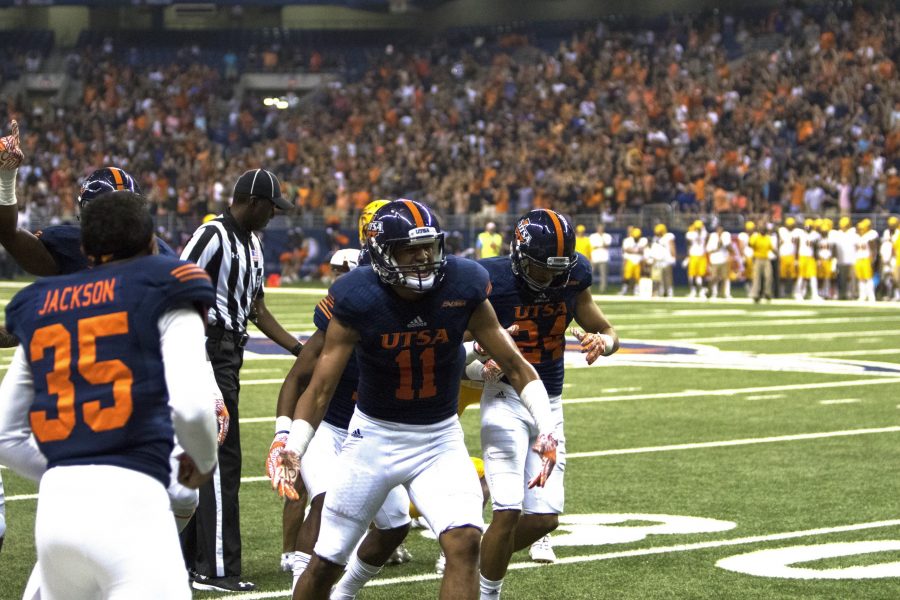 Over the course of his time at UTSA, Nate Gaines has developed into an impressive athlete on the football field. After a great 2016 campaign in which he racked up 80 tackles, he earned a spot on the 2017 preseason second-team All-Conference-USA team. Three games into his final season, Gaines has shown football fans he is a key piece to a UTSA defense that already features stars such as Marcus Davenport and Josiah Tauaefa.

Gaines started playing football at only four years old, and he quickly fell in love with the sport. “I loved the atmosphere of playing such a great team sport. Once I moved into playing with pads, I really loved the physicality of the sport,” said Gaines.

Gaines comes from an athletic family and has three older siblings. His sister went to a DI school to play basketball and his brother played football at a DII school for a while as well. “Being the youngest, I really learned a lot of my athletic abilities and stuff from my brother and my dad. We just all really like sports,” said Gaines.

Gaines played football at Poteet High School in Mesquite, Texas. There, he was a standout player on both sides of the ball. With the team consistently making deep runs into the playoffs, college scouts were always nearby, and Gaines garnered the attention of quite a few schools including SMU, the school he committed to first.

“I decided to take a visit to UTSA, and I just loved it,” said Gaines about his decision to come to UTSA after high school. “They had this culture of being like a family and they made me feel wanted.”

After things fell through with both SMU and Oklahoma State, Gaines somehow found his way to San Antonio and became a Roadrunner. Here at UTSA, he has found tremendous success and has totaled 165 tackles and five interceptions over his UTSA career, with most of his senior season still to go. According to Gaines, playing for UTSA has been a great experience.

“My favorite thing about playing for UTSA has been getting the chance to watch the program grow into a powerhouse in Conference-USA,” said Gaines.

Off the field, Gaines is a multidisciplinary studies major, and he is on track to graduate in the spring. “It’s a very broad major, so I feel like I can do a lot of things with it,” said Gaines. With graduation in mind, Gaines has aspirations of playing football professionally after college. With the type of player he has proved to be, it’s certainly not out of the question. “I’m not putting all my eggs in one basket, but that’s what I’m counting on too,” said Gaines. “With the year we’re having, hopefully some NFL scouts will recognize our defensive talent.”

In his free time, Gaines says he likes to watch Netflix. “I recently picked up playing the piano, and that’s been fun.” said Gaines. Gaines also enjoys videography and likes to edit and put together videos. “I like making videos, but I haven’t been able to make one in a while because of football,” said Gaines.

“Football has molded me into the man I am today,” said Gaines. “It gives you that perseverance and hard work ethic that will take you far in life in whatever you decide to do.”

Over the past few years, UTSA fans have grown accustomed to watching number 11 hover over the middle of the field, always reading the eyes of the opposing quarterback and jumping routes. This is his last season playing on Saturdays for the Roadrunners, but perhaps it won’t be long before we see Nate Gaines playing on Sunday afternoons.