Former roadrunners take to the NFL 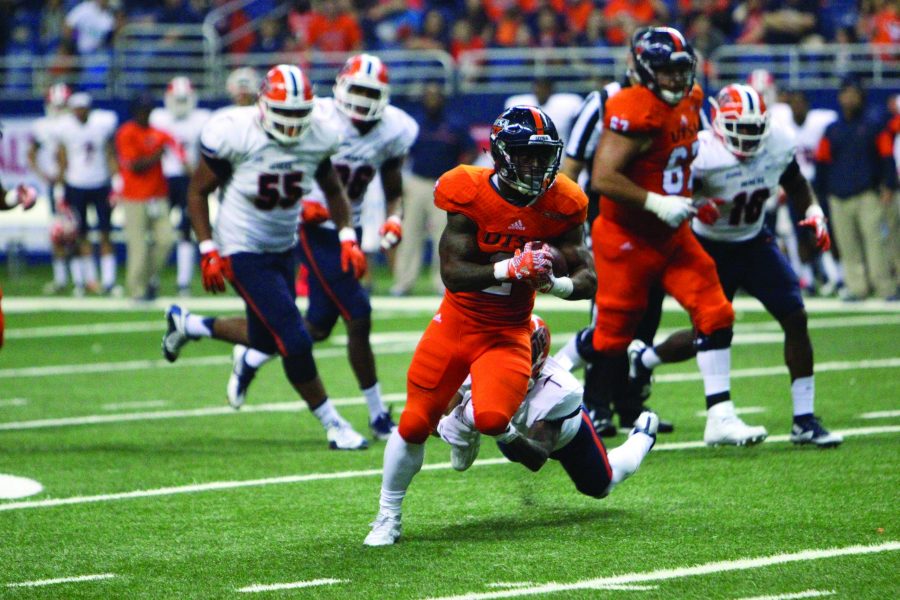 The UTSA Roadrunner football program has only been around since 2011, but athletes from the program are making their presence known in the NFL. Former players David Morgan II, Teddy Williams, Jarveon Williams and Brian Price are trying to forge their own respective paths to successful careers in the league.

Tight end David Morgan II made history back in 2016 as the first ever Roadrunner to be drafted by an NFL team when he was drafted by the Minnesota Vikings. He is currently listed as the backup tight end on the Vikings roster. Morgan II was second-team All-American and second-team All-C-USA with over 1,000 yards receiving and eight total touchdowns during his career at UTSA. One of the most memorable moments of Morgan’s collegiate career was when he managed to carry a Kansas State defender on his back for a first down.

Cornerback Teddy Williams never played for the UTSA football program, but instead he was a standout track star for the ‘Runners. He posted a time of 9.90 seconds in the 100-meter dash which was a UTSA record at the time. Williams also helped the school run a season best 39.59 seconds in the 4x100m relay in 2010. Williams is now in his seventh year in the league. He’s spent time with the Dallas Cowboys, Indianapolis Colts, Arizona Cardinals, Chicago Bears and the Jacksonville Jaguars. Williams has been with the Carolina Panthers for the past three years, and he has seen some playing time. Over his professional career Williams has 22 tackles, one interception and two forced fumbles.

Running back Jarveon Williams was a two-time team captain and currently ranks number two on UTSA’s all-time rushing list. He was also UTSA’s first ever 1,000-yard rusher and tied a program record of eight rushing touchdowns as a junior. During Williams time here, he was able to compile 2,393 yards rushing, 19 rushing touchdowns, over 500 receiving yards and one touchdown through the air. Williams is currently with the Cincinnati Bengals practice squad. During the preseason, he was able to rack up 150 yards rushing on 41 touches and had another 61 yards receiving on seven catches making him very effective for the Bengals offense.

Defensive tackle Brian Price played in 31 games for the Roadrunners and started in 13 of them. He gathered 81 total tackles and three sacks during his collegiate career. Price went undrafted during the 2016 NFL Draft, but signed his first contract with the Green Bay Packers who then placed him on the practice squad for the remainder of the 2016 season. Price now plays for the Dallas Cowboys. He was seen kneeling next to Cowboys owner Jerry Jones during a recent game.

Other Roadrunners that have spent time in the NFL include safety Triston Wade, cornerback Bennett Okotcha and defensive tackle Ashaad Mabry. Marlon Smith is also a defensive tackle, and he spent two seasons in the Canadian Football League.