Athlete of the week: Jordyn Lacy 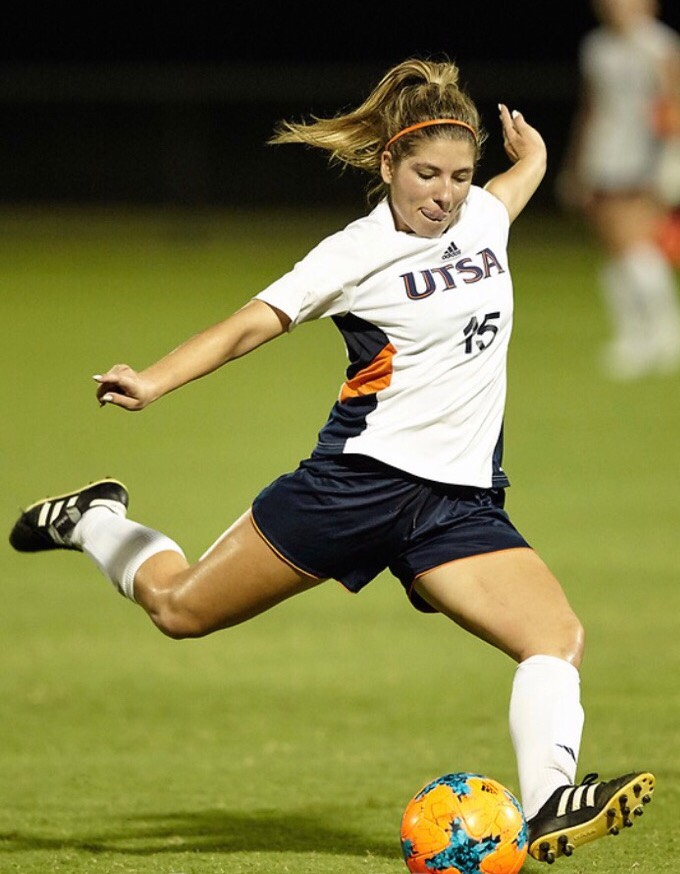 Lacy rears back her leg before the shot. Photo courtesy of Jeff Huehn/UTSA Athletics

In the midst of a losing season for the UTSA women’s soccer team in 2016, Jordyn Lacy proved to be one of the bright spots for the team. In 2016, Lacy started every match for UTSA and made a huge impact when she was on the field. Lacy tallied five goals and five assists during her freshman campaign, and was named to the C-USA All-Freshman team at the end of the season. Now a sophomore, Lacy continues to make an impact both on the soccer field, and in the classroom.

“I had really good coaches growing up and they were big influences in me sticking with the sport,” said Lacy. “I love the team aspect of the sport and how every team is a family.”

Lacy hails from Albuquerque, New Mexico, where she played high school soccer at La Cueva High School. During her time there, Lacy set school records by tallying 74 goals and 25 assists over her four-year span. Lacy helped her soccer powerhouse school take home the state championship her freshman and junior year, and led the team with 28 goals her senior season in which they reached the state semifinals.

“I went to a really good school for soccer, and it was a great experience,” said Lacy. “High school was different because it’s the first time where you get to play as part of your school.”

After high school, Lacy decided to leave her home state to come to UTSA and become a Roadrunner.

“I liked the team and the coaches. I just came here and I felt at home, it was really cool,” said Lacy about her decision to come play at UTSA.

Off the soccer field, Lacy is a biochemistry major. “My goal with biochemistry is to go to medical school,” said Lacy. “I like science, and it’s what I’m good at.” With her performance in the classroom, medical school is a real possibility. In 2016, Lacy was awarded a C-USA academic medal and was also named to the C-USA Commissioner’s Honor Roll. Now, in her third semester at UTSA, she continues to excel academically.

In her free time, Lacy says she likes to explore the city. “Since I’m not from San Antonio, I really like exploring. I go to museums and try and see other cool things around the city,” said Lacy. In addition to exploring, Lacy says she’s recently picked up crafting. “I make shorts out of jeans and maybe signs for my room…stuff like that. That’s probably the closest thing I have to a hobby,” said Lacy with a smile.

When it comes to music, Lacy has a wide variety of taste. “I’m all over the board with my music. I listen to everything but my go-to is either country or rap. I listen to rap before games because it’s more of my hype music,” said Lacy. “I also really like early 2000’s R&B, and early Kanye. That’s good,” said Lacy.

“Soccer has shaped me in so many ways,” said Lacy about the sport she’s grown to love. “I’ve never really done life without soccer, and it’s really helped me set goals in life,” said Lacy.

Since she’s been at UTSA, Lacy has started every soccer match she’s been in. Being only a sophomore, Lacy only has room to further develop and get better in the coming years. Next time you find yourself at a UTSA soccer match, be sure to look for number 15 on the field. You’ll be sure to witness her fierce competitiveness, and will to win.