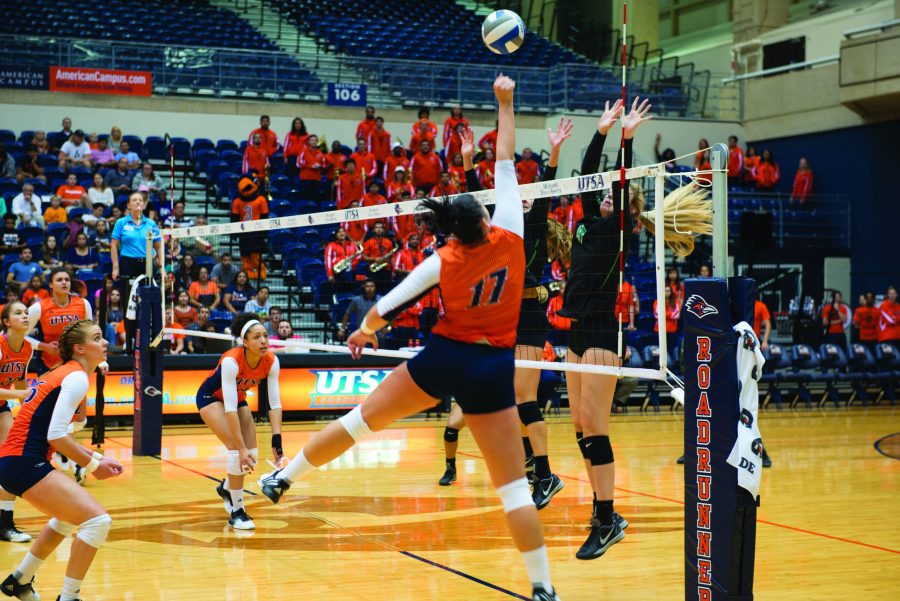 Montse Castro rises up to the net to spike the ball. Chase Otero/The Paisano

Conference play is in full swing, and the Roadrunner volleyball team looked to keep things rolling as they played the second game of their three-game home stand and took on Marshall this past Sunday. The Roadrunners have started off conference play with a 2-1 record with victories over UTEP and Southern Miss. Marshall also came in with a 2-1 record in C-USA and a 7-12 record overall for the season.

As the first set rolled on, the Roadrunners were able to quickly gain an advantage on the Thundering Herd as they jumped out to 10-5 lead with the help of three kills by sophomore Kara Teal. For a moment, Marshall looked like they had the momentum and seemed to be making a run when they narrowed the UTSA lead to two, but UTSA proved to be too much, as the ‘Runners won the first set 25-19 on a Brianna Hudson ace.

The Roadrunners got off to a fast start in the second set, as they were able to quickly reach an 11-2 lead and force Marshall to call a timeout before things got out of hand. UTSA clearly seemed to be in control of the second set. By the end of the set, it was pretty clear that UTSA was in the driver’s seat, as they easily handled the Thundering Herd 25-14. After two sets, UTSA seemed to be performing very well. Senior Marijeta Runjic had four aces and eight kills, an sophomore Brianna McCulloch had 11 kills and three aces for the ‘Runners.

“Wins are wins, doesn’t matter if we’re at home or on the road. You know we’re just trying to get a rhythm, trying to find the right lineup, we’re trying just to get in sync,” said Head Coach Laura Neugebauer-Groff. “I’m just really proud of what we did all week and it was a reflection of how we played today.

“We started off serving well, so we kept in that rhythm and we just stayed in sync ourselves. I thought we lost a little intensity in set two, they were giving us easy balls that we couldn’t take care of but I think our first touches were good,” said Neugebauer-Groff.

“We just wanted to stay focused and we told the people on the bench that if you see something going on tell someone so we could fix it,” said Marijeta Runjic. “We had awesome practices, and they went really hard. We have two male practice players, which truly helps us a lot because it puts us at another level, so they really help us all the time.”

UTSA will look to keep the ball rolling in conference play, as they will be back in action this Friday at 7 p.m. for the final game of their three-game home stand, as UTSA will take on Middle Tennessee who come into the contest with a 1-5 record in conference play.