This week on stage: Vol V 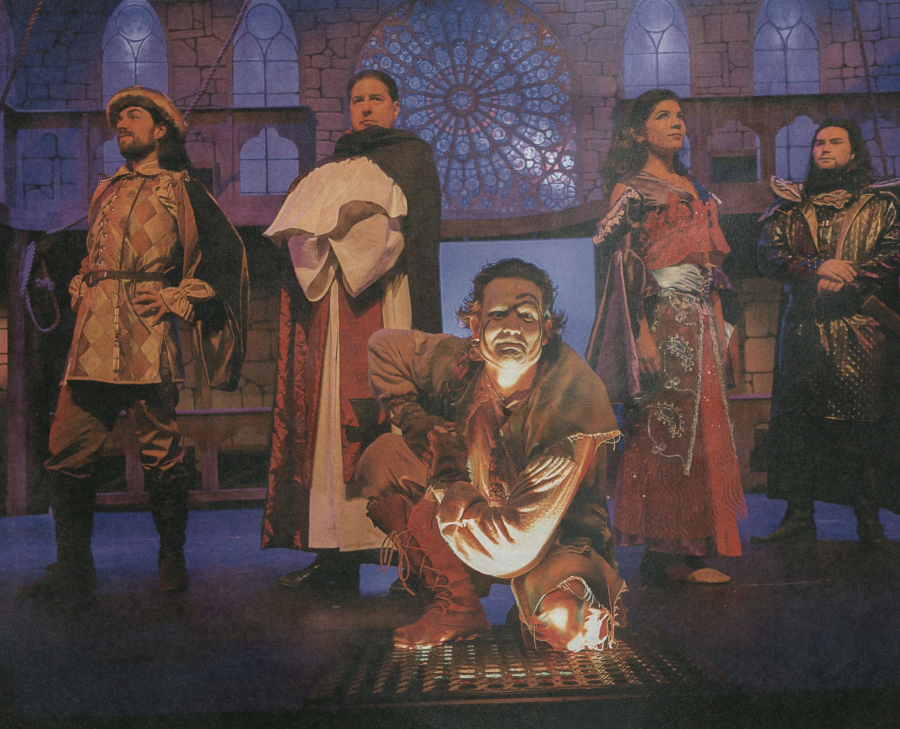 This weekend, The Playhouse San Antonio finishes its stage adaptation of the Disney animated film “The Hunchback of Notre Dame”– inspired by Victor Hugo’s novel of the same name.

But despite the similarities in the outline, significant changes have been made in the tone of the play, which brings it somewhat closer to its 19th century gothic source material.

It is Jehan’s physically disabled, half-Roma child who Frollo guiltily takes as his ward. He names the infant “Quasimodo” or half-formed.

Twenty years pass, during which time Quasimodo has lived entirely indoors as the cathedral’s bell-ringer. During the annual Festival of Fools, Esmerelda appears and captures the hearts of Quasimodo, Captain Phoebus and Archdeacon Claude Frollo.

As an object of both lust and lawlessness, Esmerelda is pursued by all. Finally, Frollo demands Esmerelda either become his mistress or be burned at the stake as a witch, a divisive act that causes Paris’ class and racial tensions to explode.

The play maintains the Disney songbook but proceeds between set piece song and dance numbers at a deliberate, somber pace that complements the production overall.

Gothic scene designs by Nicholas Ponting and the tricolor red, blue and gold lighting by Dan “Doc” Heggem are the heart and soul of the play, simulating the stone walls and painted glass of Notre-Dame Cathedral with impressive subtly and confidence.

Combined with a hunting choir led by music director Darin Newhardt, the Playhouse provides audiences with a convincing window into a sad and deterministic world in which religious hysteria confuses the spectrum of human emotionality with warring mechanizations between God and the Devil.

A contemporary reading of the Playhouse’s “Hunchback of Notre Dame”, the play stands as a complex foil to contemporary social strife.

A member of Paris’ maligned Roma ethnic minority, Esmerelda stands in for our contemporary American scapegoats—undocumented migrants, black Americans, LGBTQ people, women of all classes, the underpaid and the uninsured—whose lives are punctuated by fear of a litany of horrors including sexual violence, illness, deportation and extrajudicial murder.

Quasimodo on the other hand will strike UTSA’s late-teen and twenty-something demographics as more of an individual foil than an archetypal hero. Released in 1996, the original Disney film adaptation of “The Hunchback of Notre Dame” would have been seen by many UTSA students when they were children.

Twenty years after the Disney film’s optimism, we have become like Quasimodo in his tower. Like Quasimodo, we watch from the austere height of relative freedom while below us the innocent suffer because of madmen empowered by religion, the state—or increasingly often—both. We are concerned by the ill fate of those maligned by society, yet we are largely powerless to intercede.

It is in this regard that the Playhouse’s surprise, maudlin ending rings truer than its optimistic Disney forbearer. The animated film ends with Frollo’s defeat, Esmerelda’s salvation and Quasimodo’s heroic reception into the society that once reviled him.

The Playhouse resists any tempting false assurances in lieu of a less satisfying but more true-to-life conclusion.

“We wish we could offer you a moral like a gem to hold in your hand,” are among the play’s final lines.

In opting to present audiences with a story devoid of an obvious social or ethical teleology, the Playhouse approaches the tone and intensity of Victor Hugo’s legendary novel.