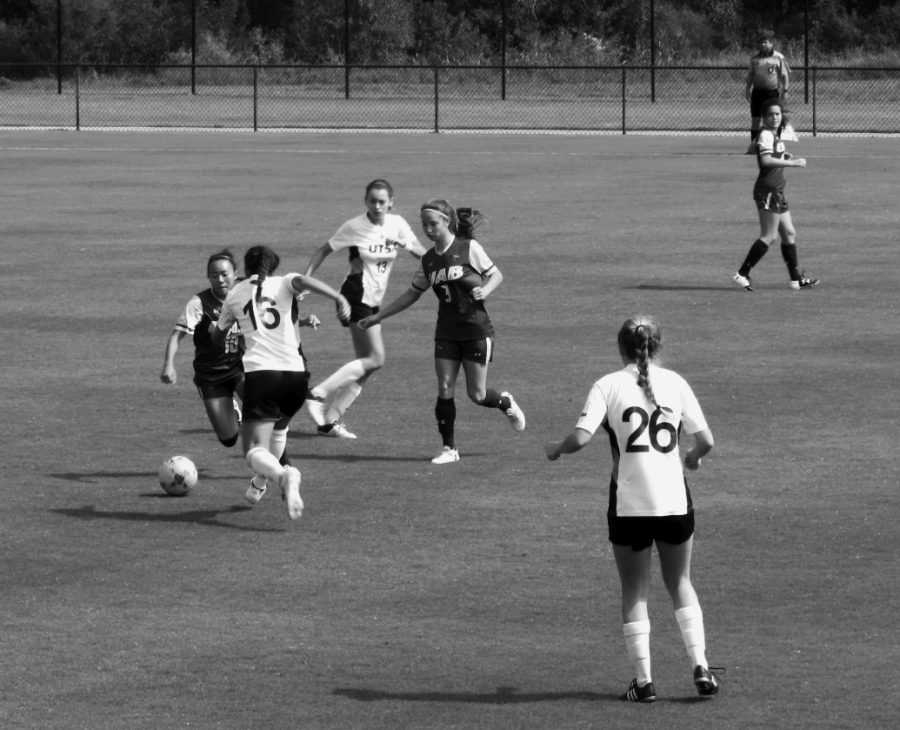 The lady Roadrunners soccer team finally returned home after away games in Houston and Denton. UTSA entered the match winning one of their last five games and looked to get things back on track as they took on the UAB Blazers. The task would not be easy for the ‘Runners, as the Blazers came into this match with a 9-2-3 record and a 3-1-1 record in the conference.

UTSA came out determined to score, as they took two shots in the first eight minutes of the match. Both of the shots just missed the goal and sailed over. The Blazers came out firing and scored their first goal on a Rachel Green kick within the first 10 minutes of the match. Shortly after the goal UAB was looking to score again, but goalkeeper Michelle Cole made an easy save to keep the score at 1-0.

UAB scored their second goal of the game at the 15-minute mark after a Caroline Kehrer kick awkwardly bounced into the middle of the net placing the Blazers at a 2-0 advantage with 30 minutes left in the first half. UTSA tried to answer back  when forward Harper Luczka nearly scored, but her shot sailed to the right of the net.

The Roadrunners were able to score their first goal of the game on a long kick from Midfielder Marianne Hernandez, the shot seemed to float in the air forever before it sailed right through the net to cut the lead to one and make it a one score game with less than 15 minutes left in the first half of play.

The Blazers came out striking within the first seven minutes of the second half as forward Megan Hudgens scored a goal to give UAB a 3-1 lead over the Roadrunners. An Ellis Patterson goal was barely caught by UAB goalkeeper Kelsey Daugherty with a little under 30 minutes left in the second half of the game. Forward Jordyn Lacy almost had a goal, but the shot sailed over the top of the net. With time dwindling down in the game the ‘Runners gave their best effort to make something happen and keep the Blazers offense at bay.

In the final two minutes of the game, defender Cailey Elder attempted a shot that sailed over the top of the net and that would be the last attempt of the game. The Roadrunners were not able to score again. The final score was 3-1 in favor of the UAB Blazers.

UAB got off to a fast start in the beginning of the game, as they were able to score two quick goals within the first 15 minutes of the game but the Roadrunners were not able to overcome those two early goals. Cole ended the game with five saves – three of those taking place in the second half. UTSA drops to 1-6 in conference play but will be back home this Thursday as they take on Western Kentucky in their second to last home game of the year.