The horses of Harvey 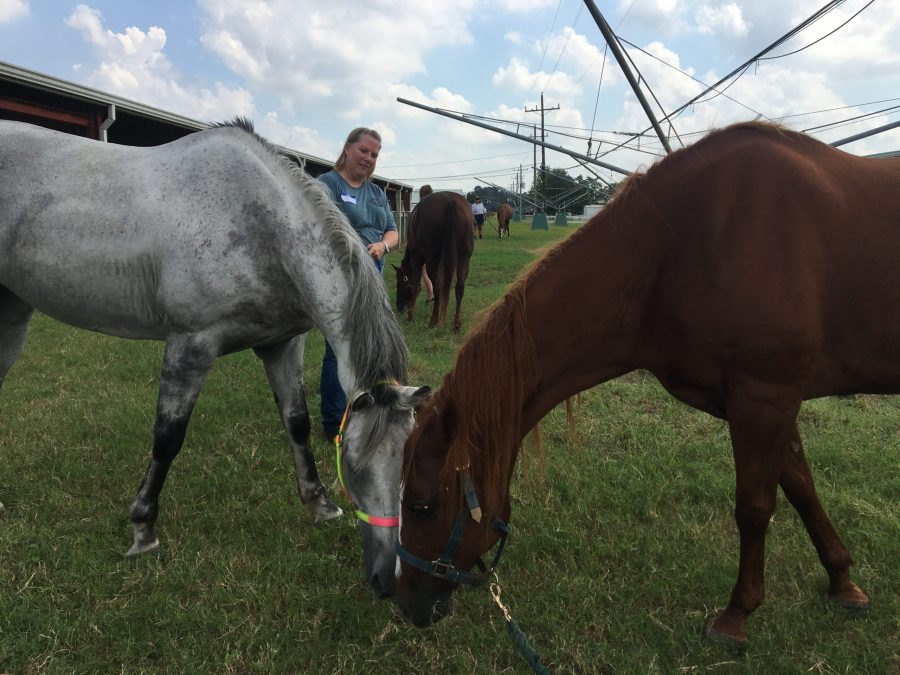 providing exercising and a free range is crucial for the horses recovery. Mackenzie Dyer/The Paisano

Although media coverage has since moved on from the shocking destruction caused by Tropical Storm Harvey in Houston, Texas, the city and its inhabitants continue to live with the aftermath. Flood waters continue to recede in many areas, houses are beginning reconstruction or in the process of abandonment, and families are coping with newfound homelessness, loss of treasured personal belongings, loss of jobs etc. But people are not the only ones trying to get back on their feet after Harvey; animals also took a severe hit from the record-breaking rainfall, surging floodwaters and hurricane-force winds.

In the midst of the storm, we saw many heartwarming videos surface of locals rescuing animals entangled in unfortunate situations. What has not seen enough spotlight, though, is how animals receive aid post-rescue. Pets often get left behind when areas affected by disasters enter the recovery process, but thankfully there are animal lovers who dedicate their time to picking up the responsibility of caring for our four-legged friends. Such a place of refuge is the Sam Houston Race Park (known as the “Track”), an equine racetrack facility in northwest Houston where racegoers enjoy high-quality horse races and place bets, along with family entertainment such as concerts. Post-Harvey, the Track has taken on a new function: a refuge offering free stabling for horses (and a few donkeys) with no place to go.

“We’ve got over 100 horses in three barns right now,” said Roland Tamez, a member of the Track’s security team. He added that anyone who needs shelter for their horses can call the Track at (281) 807-8790 and arrange for a security officer to assist.

Last weekend, I had the opportunity to go home to Houston and help put my own house back together, as well as volunteer with Texas Equine Assistance (TEA)to take care of the horses at the Track for a day. Upon reporting for my shift, I was shocked by the amount of work required on a daily basis to care for these storm-battered horses. I knew there were lots of horses in need, but seeing the many stalls in multiple barns occupied with horses was another story.

Every horse had its own story– heartbreaking stories to their journey of being rescued. Some horses swam over barbed wire fences, others were left to soak in putrid flood waters while their hooves became saturated with a laundry list of contaminants.  My team and I went to work cleaning, walking and feeding the horses, mucking stalls and so on. I asked those in charge why so many of these animals were left behind and how long T.E.A. would be able to shelter them at the Track. Sam Houston Race Park President Andrea Young asserted the barn area will be available as long as necessary.

“Some areas may take three weeks to a month before people can get back into their homes because that’s how long it will take for the water to go down,” Young said. “We’re prepared to help as long as we need to.” Recovery is no easy feat, but with the small, steady stream of volunteers showing up each weekend, the goal is to eventually reunite each horse with their owner, or find those abandoned a new forever home.

Horses displaced by Hurricane Harvey are not the only account of animals who have been left behind in times of disaster. Florida saw multiple dogs abandoned by their owners as Hurricane Irma crept up the peninsula. According to USA Today, Palm Beach County Animal Care and Control Director Dianne Sauve said the agency recovered roughly 40 dogs in the days before Irma made landfall in Florida. Some were tied up, while others were in pens or in enclosed yards, unable to escape. Evacuating with an animal is difficult, but what I want pet owners to learn from what I’ve seen is the importance of treating their animals with respect and to know that getting rid of pets does not make the situation any better in the grand scheme of things. So, if you must, give your pet up to your local county be aware that turning over ownership means you cannot get them back after the hurricane. Plus, voluntarily surrendering your pet could make it more difficult to adopt another pet in the future.

“Don’t let your dog out right after the storm passes, it’s going to be confused by the damage and debris. Animal caretakers see a spike in animal injuries after storms because animals get cut and caught on debris.

“If you come upon an abandoned pet, use caution. The combination of confused dogs and stressed people result in an uptick of dog bites after storms.”

In all honestly, I find there is no excuse for such a situation. Pets should not be disposable items when keeping them becomes inconvenient. It is unfortunate this issue is coming to light as a result of the various tropical storms and disasters affecting communities around the globe, but there is hope that people will be able to learn from it.