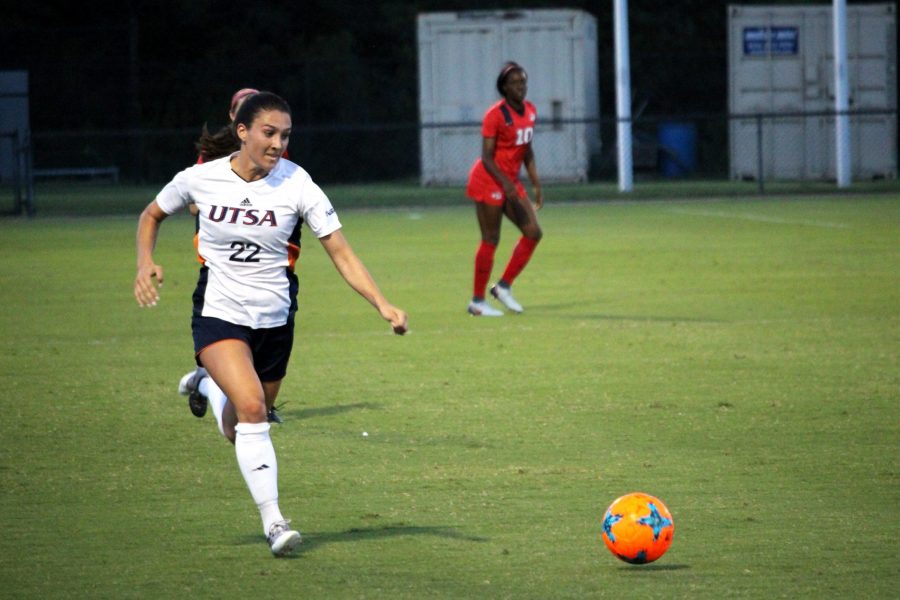 The UTSA women’s soccer team was back in action at Park West last Thursday night as they took on the Western Kentucky University Lady Toppers. The Roadrunners looked to snap a five-game conference losing streak against the Lady Toppers who came into the contest with a 2-4-1 record in conference play but failed to get the win.

The ‘Runners took four total shots in the first half of play with Kaja Skare just missing what would’ve been the first goal of the game. Ellis Patterson also had two attempted shots that were off the mark. A critical reason the game remained scoreless at the end of the first half was because WKU goalkeeper Allison Leone was able to get two saves on four attempted shots. UTSA was able to fire off four corner kicks, but none of them resulted in a goal. Both Western Kentucky and UTSA had five fouls at the end of the first half.

Both teams came out of the half determined to put some points on the board. The Lady Toppers scored the first point of the game, as Aleksandra Kozovic scored in the first three minutes of the second half to give WKU the 1-0 advantage. With about 30 minutes left in the match, UTSA’s Jordyn Lacy nearly scored for the Roadrunners, but the shot sailed above the top of the net.

With under eight minutes left to play in the game, Lady Topper, Hannah Cady, scored the second goal of the game to give WKU the 2-0 lead, making the outcome of the game look bleak for the Roadrunners. About three minutes later, Lacy finally snuck a goal in for the ‘Runners, cutting the lead as the WKU goalkeeper slipped and lost her footing.

Shortly after, the Lady Toppers were able to find the net again when a WKU player tripped up UTSA goalkeeper Michelle Cole to give the Toppers a 3-1 lead for the win.

With the loss, the Roadrunners are on a six-game conference losing streak and fall to 1-7 in conference play and 2-13 on the year. UTSA will take on FIU on the road next, before returning home on Friday for their final home game against UTEP.