Nightmares of the fourth dimension 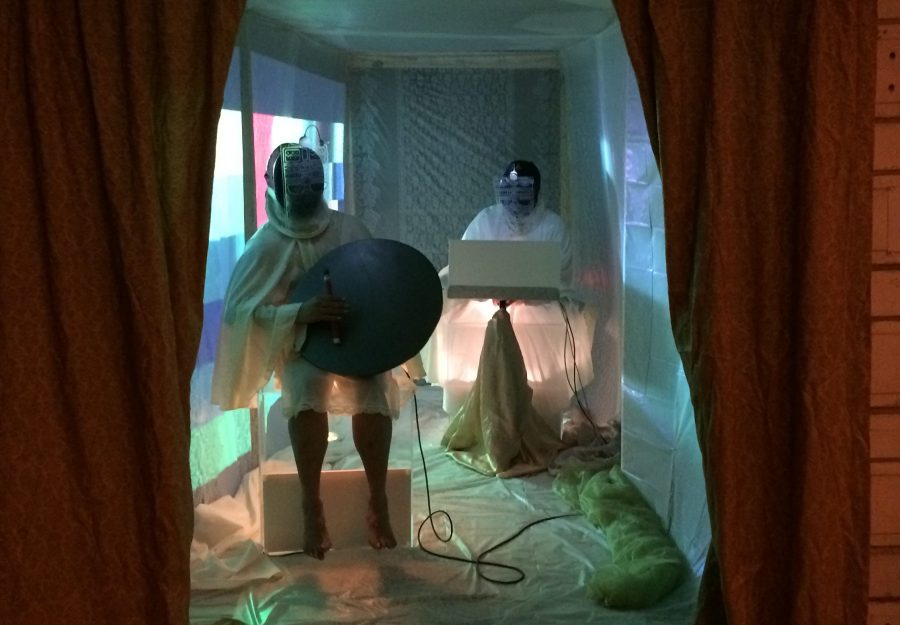 Performance by Jason Eric Gonzalez. Courtesy of Dept. of Art

As the world becomes more digital, the contemporary art mediums of the information age reflect a shift from conventional mediums to those made with binary code and RAM.

This Friday, Oct. 27, UTSA’s New Media Collective students are putting on a one-night show titled “Nightmare On Flores” at the 1906 gallery, located in the Southtown Arts District at 1906 South Flores Street.  The event will take place from 7-10 p.m. and is free admission.

“Nightmare on Flores” is not an exhibit, but a one-night event that showcases what is happening right now in art. Jayne Marie Valverde, a senior art student, who will be showcasing at the event, warns patrons to not expect this to be a Halloween themed haunted house.  Although the event is not Halloween themed per se, Prof. Mark McCoin said over the phone that some artists do plan on exploring some dark material in their pieces.  Prof. McCoin has been a professor at UTSA since the Fall of 2013 and is the New Media Coordinator.  Since Dr. McCoin has been at UTSA, there have been at least two or more new media shows a semester.  There have been shows at Luminaria, Blue Star Contemporary, The Museum of Human Achievement (which is in Austin) and they have even had shows in Mexico.  The artists that partake in these events are often UTSA graduate students, advanced undergraduates, local San Antonio artists and artists from all over the world.   “Nightmare On Flores,” will be unlike any art show that you have ever been to, leave any and all previous art show memories behind as you enter a show unlike any other.

New media art is an interdisciplinary concentration that focuses on the inclusion of technology into art.  However, the inclusion of technology is only one facet of this concentration.  The artists strive to present their ideas in new and fascinating ways; these artists will not merely be putting old wine in new bottles.  Further, one of the biggest distinctions of new media is incorporating the fourth-dimension of time.  The addition of time into these pieces adds a certain exigency to the event, meaning the attendees must be active, and according to Valverde “when you go to a new media show, you are stepping into a performance, you must be willing to take part in the performance.”  This is by far the biggest distinction with fourth-dimensional art juxtaposed with three-dimensional art which is static, such as a painting or a sculpture.

At these shows, the artists do not merely display their work, but they actively engage all the senses in their work, usually with movement and sound, thus, showcasing the fourth-dimensional aspect of the medium.

The shows are considered pop-up shows, meaning that these shows last only for the night.  These shows are not exhibits, so once the night ends, so do the installations.  Lastly, what differentiates these shows from exhibits is that these shows are site specific, and this is a critical element that adds to the overall experience of attending these shows. Further, the artists must take into account where the event is held and work with what the site gives them for better and worse.

This Friday, the artists intend to take over all of 1906, so come out and try something new, not only see what these young artists are creating, but to take part in a in a lifetime event.