NCAA football’s race for the playoffs heats up 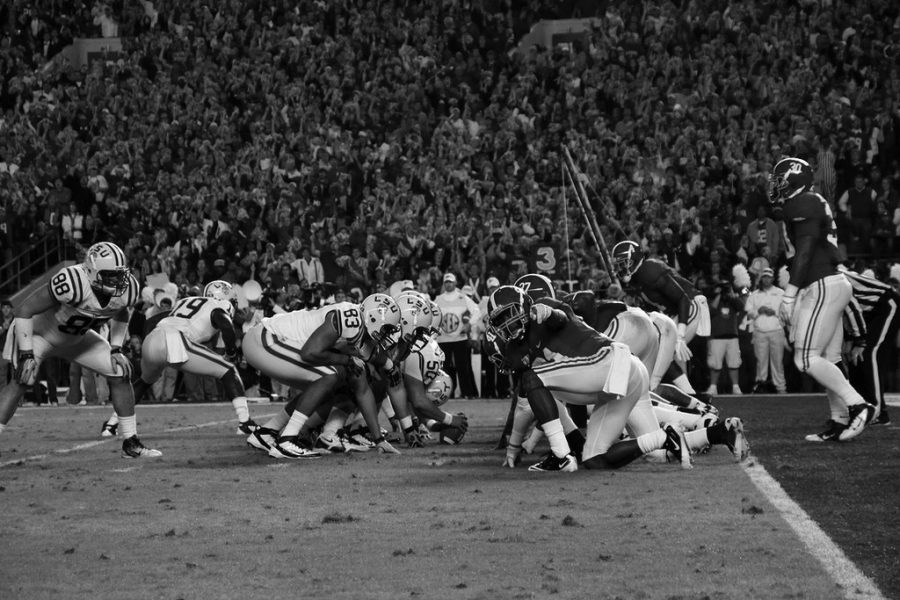 The Alabama defense prepares for a goal line stand against LSU. The Coiner/Wikimedia Commons

Every year in college football, fans eagerly anticipate the release of the initial College Football Playoff (CFP) rankings. It offers a chance for fans to see where their team stacks up against the rest of the country. If your team is in the top four of the final rankings, then they have earned their spot in the college football playoffs. However, the initial rankings are not without controversy. Fans of teams not in the top four will make their team’s case as to why they belong in the top four, even if they don’t actually belong. Regardless of your team affiliation and their spot in the initial ranking, the ranking itself is far from perfect.

The initial rankings this year came as somewhat of a surprise to college football fans. Not only was Alabama not ranked at number one, but Notre Dame snuck into the number three spot. At number one, however, was Georgia. While these rankings were unexpected, they are the correct ones. The selection committee rewarded Georgia for not only their undefeated record, but their strength of schedule as well. While both Alabama and Georgia are undefeated so far, Alabama has yet to play anyone noteworthy. On the other hand, Georgia holds a victory over the third ranked Fighting Irish. Speaking of Notre Dame, they find themselves at number three due to their only loss coming by one point to the number one team in the country.

One of the many teams with only one loss on their season so far, Clemson comes into these rankings at number four. However, whether or not they deserve the number four spot is highly debatable. Their lone loss came in an ugly Friday night game against Syracuse by three points. The team with the best argument to take Clemson’s number four spot is Oklahoma. OU’s loss came to a surprising Iowa State team that holds wins over two of the top ten teams in the nation. If Oklahoma wants to crack the top four, and the college football playoffs, they’ll have to win out and hope for other teams to falter down the stretch.

Hit: Miami and Wisconsin at Nine and Ten

Despite both teams being undefeated so far, Miami and Wisconsin are looking at multiple one loss schools ahead of them in the rankings. The reason for this is simply that Miami has played too many close games to lesser opponents while Wisconsin has yet to truly play anybody competitive. Win out, including a victory of Notre Dame, should put Miami in the thick of the playoff conversation. For Wisconsin, the best they can do is win out, win the Big Ten title and hope some of the one loss teams ahead of them lose again.

With the initial rankings, Washington State only has two losses. This can be argued as a fair basis for their low ranking. However, only one of their losses was by a wide margin with a 37-3 loss to Cal. The other loss is to a surging Arizona team, that has been dominant lately. Despite this, two of WSU’s victories come over teams ahead of them in the rankings – USC and Stanford. Two key wins should play into the Cougars favor. With a now impressive 8-2 record, Washington State should see their rank increase to the low 20’s and as high as the 17-19 range.