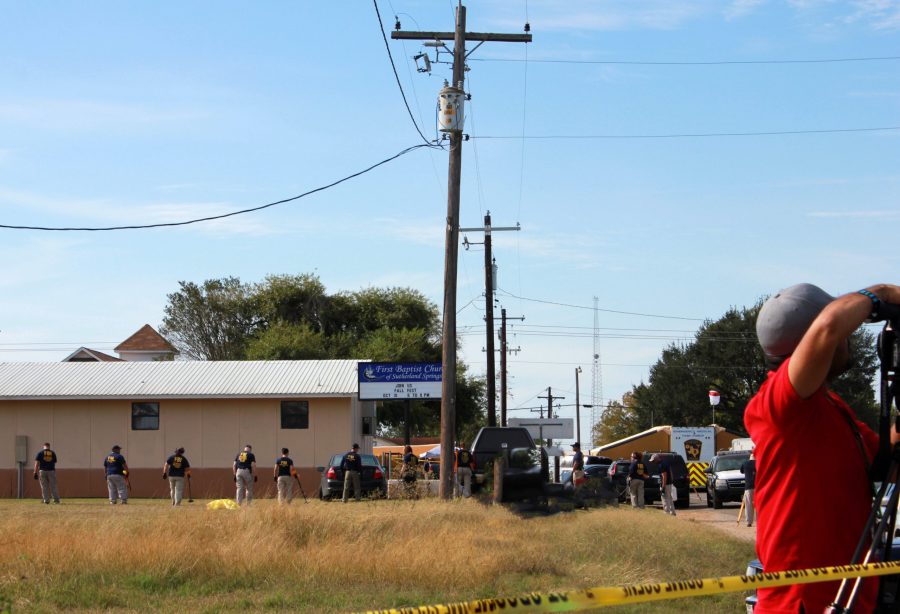 The FBI searches the premises of the First Baptist Church in Sutherland Springs after Sunday’s shooting. Heather Montoya/The Paisano

In what Texas Governor Greg Abbott called the deadliest mass shooting in Texas history, 26 people died after a gunman opened fire on the First Baptist Church in Sutherland Springs, located approximately 30 miles south of San Antonio. Devin Patrick Kelley, 26, opened fire on the church with a Ruger AR-556 before fleeing the scene and later dying in his vehicle.

The First Baptist Church was holding its local Sunday service for approximately 50 community members when Kelley opened fire outside, killing two individuals. Kelley then walked into the church service and opened fire once again, killing 23 people, one of whom was the pastor’s 14-year-old daughter. Another person died in the hospital and several others were injured.

“As governor, I ask for every mom and dad at home tonight that you put your arm around your kid and give your kid a big hug and let them know how much you love them,” said Abbott in response to the attack. “There are so many families that lost family members. We mourn their loss.”

President Donald Trump also responded to the shooting, from Japan where he was meeting with Prime Minister of Japan, Shinzo Abe.

“This act of evil occurred as the victims and their families were in their place of sacred worship. We cannot put into words the pain and grief we all feel, and we cannot begin to imagine the suffering of those who lost the ones they love,” Trump said, addressing the issue from Tokyo. Trump believes the issue is more about mental health than gun control.

Kelley was a former airman of the U.S. Air Force but served one year in military prison for assaulting of his wife and child. Kelley was later court-martialed and released from the military for a bad conduct discharge in 2014. A Facebook page for Kelley showed several photos of a Ruger assault rifle, but the page was taken down a few hours after Sunday’s tragedy.

UTSA President Taylor Eighmy tweeted Sunday afternoon about the event, giving his condolences to all those affected.

“So saddened to learn of the senseless Sutherland Springs shooting. The UTSA community extends its deepest sympathies to all those who lost loved ones,” Eighmy stated.

Chephren Braconier, sophomore cybersecurity major, believes events such as this shooting are too commonplace.

“What happened is a national tragedy. That being said, it should not be used as a political platform in any way. Right now, the community needs to mourn the loss of life because of this event,” Braconier said. “We have a mental health problem and a gun problem. But the best thing we can do is stand with the Sutherland community during this incredibly difficult time.”

Kelley was pursued by two community members after he opened fire in the church. One member, Stephen Willeford, fired back at Kelley with a rifle of his own. Willeford halted and jumped into the vehicle of Johnnie Langendorff. Willeford quickly updated Langendorff of the situation, and the two pursued Kelley as he drove away.

Paisano reporter Heather Montoya visited the church grounds soon after the shooting and described the scene.

“The streets surrounding the First Baptist Church of Sutherland Springs were closed off with caution tape. Reporters with their news teams and camera crews, as well as people of the Wilson County community, were lined up along the caution tape at the two main entry ways to the church. In front of the church, near the First Baptist Church of Sutherland Springs sign, was the largest crowd of reporters. The crowd in front of the church was waiting to hear an official statement regarding specific details of the event, the suspect and the victims.”

A candlelight vigil was held Sunday night for the victims at the post office across the street from the church. Many of the tragedy’s victims were identified Monday afternoon, with ages ranging from 5 years old to 72 years old. Authorities believe the event was a result of a domestic dispute and not religiously motivated.

Texas Senator Ted Cruz noted the severity of the situation, but found a sense of hope in the Texas community.

“Even in the hours after this tragedy, there’s also inspiration and hope,” Cruz said. “We’re seeing the community come together, and in the face of unspeakable evil, we’re seeing Texans helping Texans.”