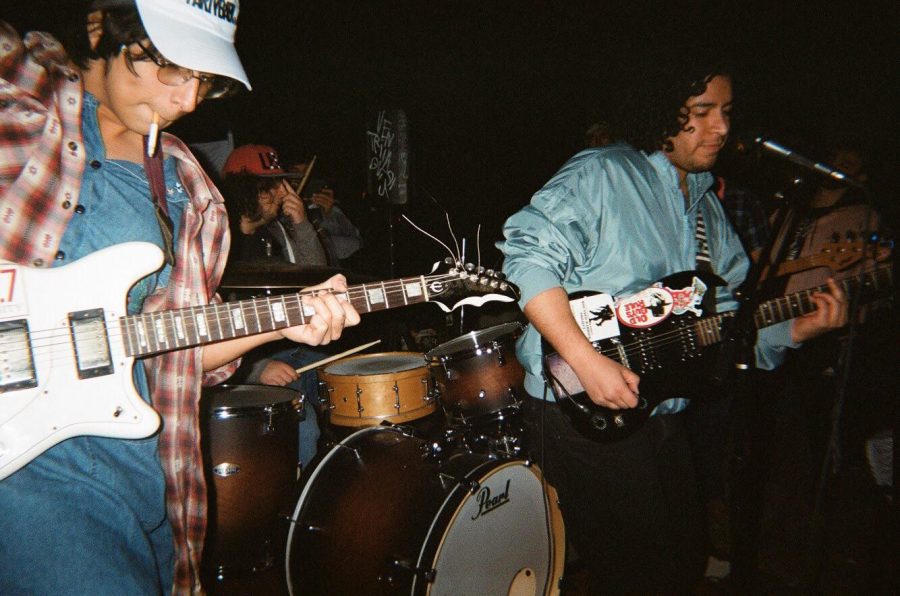 When three local Texas bands with unique and euphoric sounds collide for a night to amplify each others energy, you don’t want to miss it.

Hikes, a band native to Austin, The Hawks of Holy Rosary and Booty Feet, both native to San Antonio, make a return to the beloved city jewel, Brick at Blue Star Arts Complex for their latest live gig.

Both Hikes and Booty Feet have released new EP’s this year, and are eager to experience it with their fans.

Booty Feet is a wild and expressive local indie band that blends smooth alternative-style vocals with funky rock and roll textures. The San Antonio quartet consists of vocalist and guitarist Noah Escamilla, drummer Luke Mitchell, bassist Jakob Rau, and guitarist John Morgan.Booty Feet likes to think of themselves as “the neighborhood plug.” “Everyone’s happy to see them and happy to hit them up,”says Escamilla.

In a brief sit down with the tranquil yet excitable group, their love for the San Antonio city is clear. “It’s a petri dish of DIY energy that is just pulsing,” says Escamilla. .“Everyone is so engaged in San Antonio, and when the audience meets you halfway, that is where the magic happens,” proclaims the band,chiming in on each other’s thoughts.

Beginning about two years ago, the foursome concurs that when they first met, the connection was instant. Escamilla and Rau began writing in Rau’s garage and quickly met Mitchell. When Morgan joined the group, the sound was full and finally complete. “The first night Luke came in and he took off his shirt and then we all did it.We were all screaming and going crazy and what not and we knew it was destiny,”  they chuckled, leaving out some of the more mischievous  details of that night . And as time goes on, the realization continues to evolve for the band.

Though they are a fairly new band, they have already began making big strides for themselves in San Antonio with local shows and a multitude of press recognition. Booty Feet has put on house shows around San Antonio, in which they invite fans to a residential location and put on a performance that’s just as massive and energetic as you’d expect at a traditional venue.

One of the most notable characteristics of Booty Feet is their interactive performance style. Fans are loud and engaged, even crowd-surfing each other throughout the living room as they bang their heads and stampede around the house entranced by the band. “There is a very specific booty feet emotion. It’s like a combination of three different types of parties–chilling and skating with your friends, a hotel rooftop party, and church,” says Mitchell and Escamilla. Booty Feet is excited to perform their latest EP as well as some new music that has recently been in the works. “We never stop writing. And when were not, I’m still writing in my head” says Escamilla. And when asked about the writing process between the four men, they simply respond “A mess,” erupting into laughter. “It’s a very democratic and inclusive process.”

Austin-bred band, Hikes, makes their return to the states after a summer stint in Japan that was made possible through their own investments, friends and family, and the help of fans crowdfunding efforts. And though there time is Japan has come to an end, there is no doubt that the country– that initially attracted the band for its food, people, the great bands that come from there–   has left a lasting impression on the band. The band consists of  drummer and backup-vocalist Chris Long, guitarist and backup vocalist Will Kauber, Guitarist and lead-vocalist Nathan James and bassist Colin Jenkins.

Hikes blends an indie acoustic sound with folk inspirations using bombastic drums, sharp and smooth strings and striking rifts. What is even more intriguing about the band is the wispy voice of their lead vocalist paired with robust and heavy guitar and drum arrangements.

The quad draws a mass of their inspiration from nature, and incorporations of picturesque landscapes and terrain are frequent throughout their music videos, namely “Shepherd’s Clock” in which they perform in a sea of autumn leaves.

Hikes always manages to put on a high energy set while feeding off of each others energy and keeping the crowd pumped, but what they hope the crowd feels most during their set is “alive. hopeful, youthful, and strong. Extreme positivity, belonging and love.” says James.

Hikes shows no signs of slowing down anytime soon and are already working on a full-length record and readying a February tour around Mexico. “We’re all really excited to craft a new record using all of the things we’ve learned over the past 6/7 years of being friends, becoming world travelers, and really just getting older and wiser” says James. And when asked where they see themselves in the next five years,  “having more friends and having more resources to help make the world a better place, figuring out our ‘voices’ more and getting better at articulating our feelings through our music,” they responded.

Both Hikes and Booty Feet are no strangers to performing together and the fans of each are very similar. Both bands are storytellers with complex lyrics and meanings and sounds that make you want to move and shake, and they are even big fans of each other. “They’re just some cool ass dudes who make dope music” says Booty Feet gushing about Hikes. And sending the love right back, “they’re amazing! Both of our bands like to get a lil technical and that’s always fun to watch,” says Hikes about Booty Feet.

The addition of the punk-pop Hawks of Holy Rosary band into the mix is sure to make for an even more exuberant and spiritual experience.It is no surprise that Brick at Blue Star is the selected medium for these three local bands that are carving their own names in the sand. The venue is popular amongst San Antonio bands for their inviting and family- friendly nature that frequently brings the city together for art, food and music. Be sure to make your way to Brick at Blue Star  this Thursday at 9pm for the chance to lose yourself in the music and embrace your inner fangirl.