Athlete of the week: Brady Jones 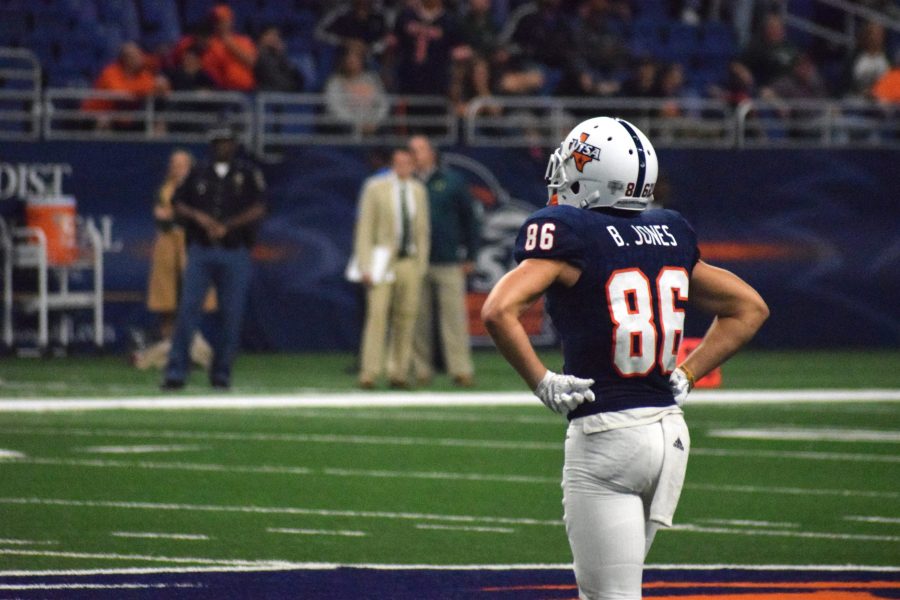 Brady Jones looks up at the crowd before the punt return. Ricky Galindo, The Paisano

After a breakout junior season in which he caught 26 passes for 322 yards, Brady Jones has continued to be a focal point of the UTSA offense and special teams unit during his senior year. Before Jones was a standout slot receiver and punt returner for UTSA, he was just a small-town kid from South Texas.

Jones hails from the town of Beeville, Texas, where he began playing football in the fifth grade. “I just always loved the energy of the team setting and the feeling of winning,” said Jones. “I loved hitting people too,” said Jones with a smile.

Just before his freshman year of high school, Jones moved away from Beeville to the nearby town of George West where he began his high school football career.

Jones played multiple positions for the George West Longhorns. He played quarterback, safety and punter throughout his varsity career. At safety, Jones tallied 110 tackles and four interceptions in his junior campaign. Unfortunately, Jones tore his ACL in the first district game of his senior season. “I was getting some looks to play defense for some places, but once that happened the looks stopped,” said Jones about his injury. “But I knew I wanted to play division I football,” he said.

Interestingly enough, former UTSA quarterback Eric Sosa is Jones’ brother in-law, and Jones states that his presence was a big factor in his decision to come to UTSA. “It was going to be good to have him here for support, and my family was close too. The energy of the new program drew me here, and it’s one of the better decisions I’ve made.”

Off the football field, Jones is a finance major. He has already earned his undergraduate degree in finance and is now pursuing his MBA in the same field. “I want to work in private equity and stay local to San Antonio,” said Jones about his career aspirations.

When Jones is not running routes or fielding punts, he can probably be found on a local San Antonio golf course. He claims to be quite the golfer. “We have every Monday off, so I try and play every Monday,” said Jones. “I’ve been getting better… I shoot anywhere between 75 and 80,” said Jones. Maybe if his finance career doesn’t work out, Jones can join Jordan Spieth on the PGA tour.

“Football is 24/7, so it’s good to just relax and take a break sometimes,” said Jones. Aside from golfing, Jones enjoys hunting and fishing.“I’m from South Texas so I like all that small-town stuff,” said Jones. “When I was in high school I also rodeoed a lot.”

For having the appeal of a country boy, Jones actually listens to hip-hop music.“I listen to a lot of rap,” said Jones. “My mom wouldn’t like that answer, but it’s what I listen to the most,” he said with a laugh.

Before every game, Jones goes through his pregame ritual in the locker room while suiting up.“I had an older brother that passed, and so I write his initials on one glove, and the word ‘agape’ on the other one,” said Jones. “Agape” is the greek word for love, and is commonly used in christianity.

Jones said he doesn’t have any hidden talents.“I can’t sing, can’t dance…I’m better than my friends at golf, but that’s it. I’m pretty much just an average Joe,” Jones said.

With just a few games left in his senior season, Jones says the brotherhood of the team is what he’s enjoyed the most about playing for UTSA. “Not many people get to play division one football. Some of guys on the team are my best friends, and they’ll be my best friends for life,” Jones said.

“I feel like football teaches you about life,” said Jones. “Being a part of a team working toward a goal and overcoming adversity, it’s stuff that’ll help me later on in life.”

Brady Jones will look to continue his productive senior season on Saturday when the ‘Runners take on the Marshall Thundering Herd.